Sure, anything for a good cause. Looks like it's going to be a big donation :)

Unfortunately I wasn't able to  figure out what caused the error, but your save did have one uncollected secret item left in the fire stage. You need to reveal hidden blocks with Sonar Wave to get to it.

PS. I thought I fixed that typo already, but must have forgotten about it.

This might require some digging, but I’ll see if I can find what caused it. Thanks for the bug report.

Here you can find the change log for all releases

Almost all of the issues you mentioned were a result of priorization. The project had already taken too long, so some stuff was simply left out / done as mvp to save time. Nice to hear that the things I actually spent a lot time on were to your liking.

Send an email instead and I'll hook you up with a key. You can find the address from invisibletile.com

Afaik, only .NET, DirectX and the %appdata% folder.

Unfortunately SharpDX TK is Windows only, so porting to Linux would mean porting the game to MonoGame first. Shouldn't be too complicated, but probably not worth the effort.

In a nutshell, Giga Girl is a classic NES Mega Man -like action platformer. The whole game started as a Mega Man remake project, so chances are that if you're into the original MM games then you're going to love GG too.

Giga Girl is not a very long game, but it's unlikely that you'll finish it in one go. It took 10 hours (on average) for our fearless test players of Mega Man veterans to beat the game. The lenght of the game has also been considered in the pricing.

I hope you will have as much fun playing Giga Girl as I did making it :) 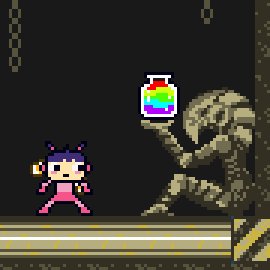