Try triggering the init() that’s usually how I do it. ;)

Thanks for playing! This was my first game and I used Pico-8 which has a limited color palette.

Thanks for your comment! The time in game is getting irl seconds, which is equal to hours in game. The music is also composed at 60bpm to set the pace a little more.

Great job using the screen resolution! It was fun zipping around in the tank and trying not to get swarmed. I agree, I was wishing for sounds as well ! Great game!

Looks like it works. Haven’t been able to solve using both though…

Thanks so much! It does not out-of-box, but there are undocumented pokes that retrieve mouse co-ordinates. Maybe something to look into!

This was super cool and I think there’s a lot more you could do with this concept! Also glad to not be the only “toy” in this competition! Great work!

Thank you! Yes, very much a different pace from many of the other games. Going to be adding improvements to keep players occupied hopefully!

I love the atmosphere playing this game, it’s cute and has a mystery element that makes you want to keep playing (though I did not completely finish it). The dialogue is so well done, and the vibrant style and animations are somewhat dreamlike. Really, I cant wait to finish the game after I play some others! ;D

I really enjoyed this game! The number of awesome things you managed to include makes it feel fully developed, and I loved the story. Job very well done! (I hope there will be a sequel :)

Love the creative design in this game! The gameplay is very smooth and satisfying. Collecting coins and bones is fun and challenging. I think more story elements would have been sweet. Overall nice job!

Nice game! I really like the speed of the enemies and the wasd movement. Once I died I didn’t know how to restart.

Thanks for playing! Many more updates planned which I’m hoping to start next week.

Thanks! Yep, That is going to be the fertilizer feature to speed by 2x.

I started trying to crunch in one final tool: Flower Tool.

This is a w.i.p. and I have a backup build in place until I can get it working. 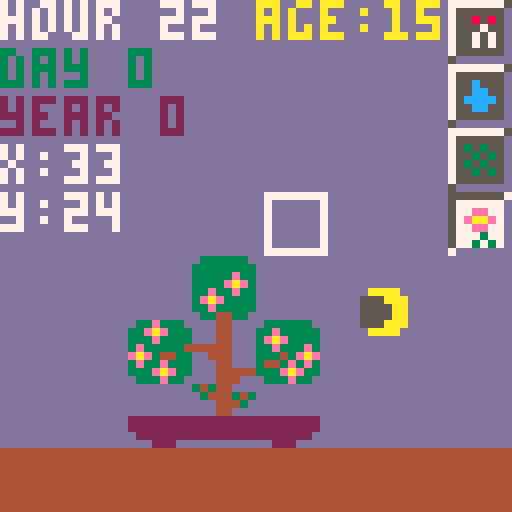 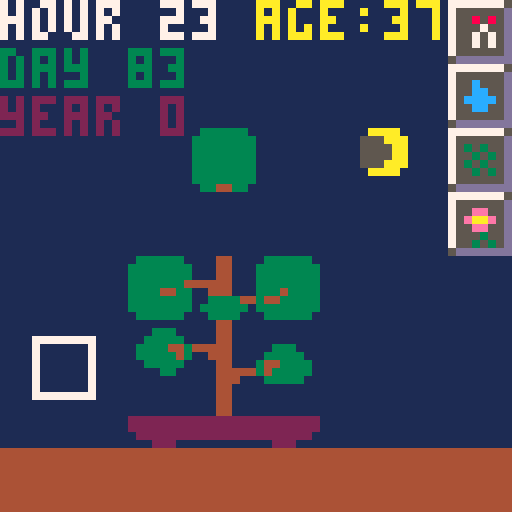 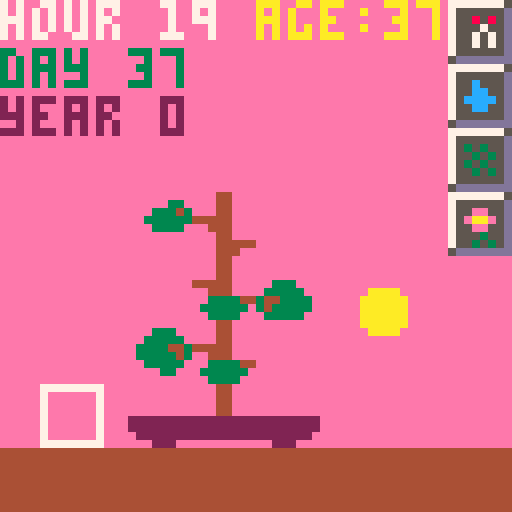 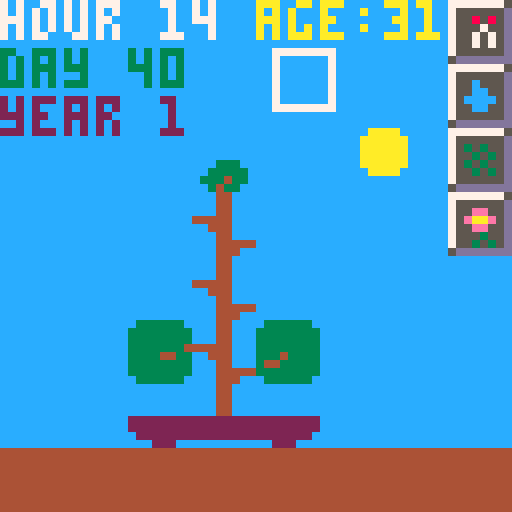 Probably some bugs I’m missing, but it’s in it’s final state. I added one final feature which is lopping off branches to add further tree customization. (Tip: lopped branches wont grow back)

I am planning to release tomorrow I think around 12p EST :)

Have a great rest of jam!

Hey guys, thought you might like to hear the music I’ve added to the game. I composed it at 60 bpm to coincide with the in-game clock tied to realtime seconds. I also added a little sound effect when trimming leaves. Music can be turned on/off with Z button.

Also, I’ll be releasing as a beta with the goal of finishing all the features post-jam.

Lmk what you think!

This looks so fun! Love the idea for quick decision mini-games! Excited to play it! 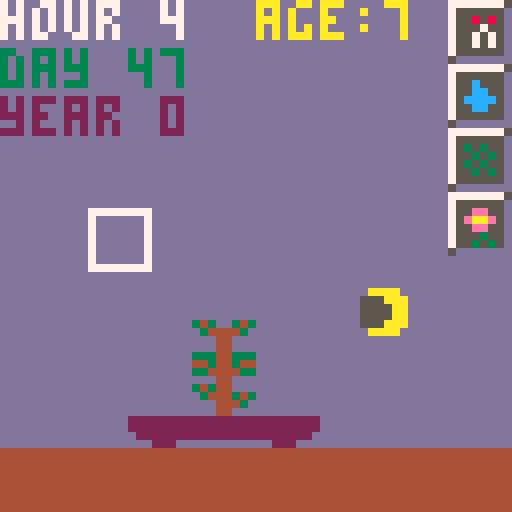 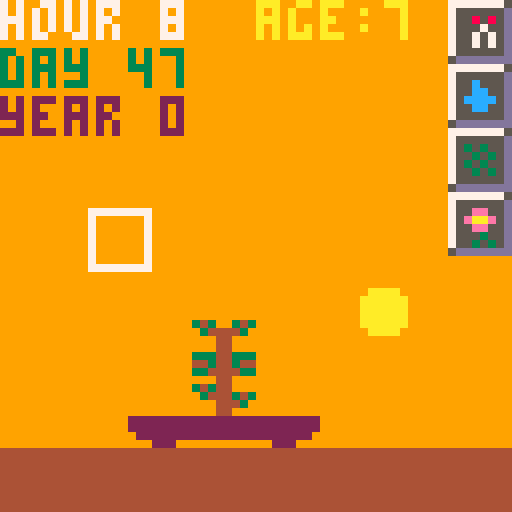 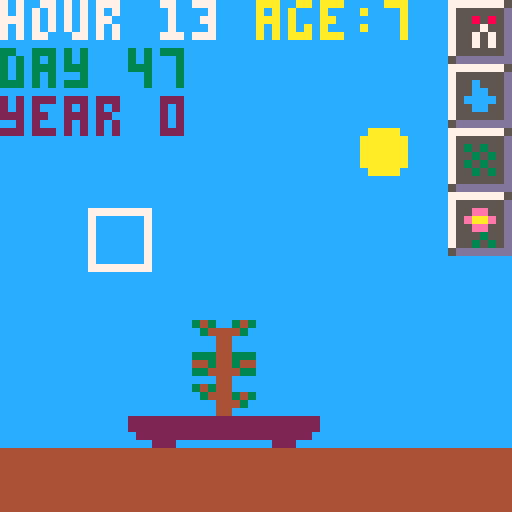 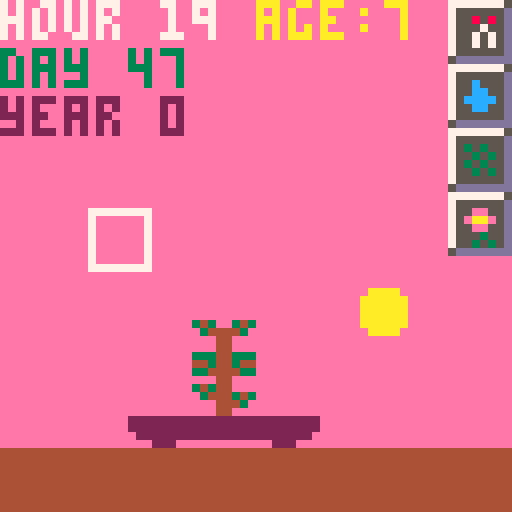 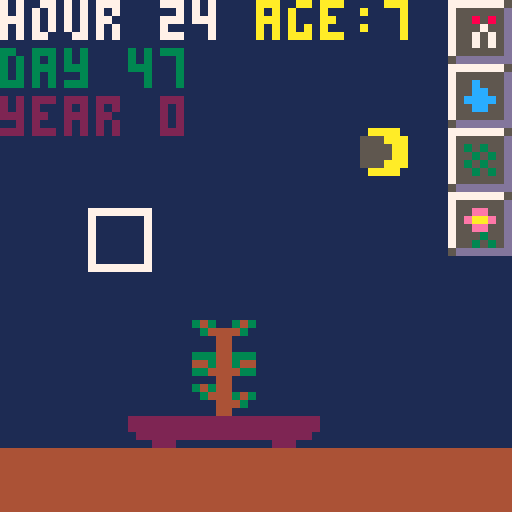 Update: You can now perform safe and legal tree abortions in game! Decoupled the growth algorithm from time of day to grow independently, so your tree will begin to regrow 2 days after a trunk chop.

Right now I don’t plan to add to the background, and the colors do help to add something between growth stages. I think the music will help even more! 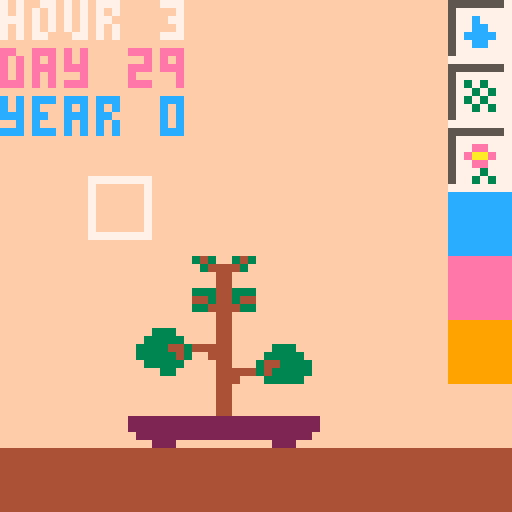 Hey guys, so I went ahead and just fixed the screen to 64x64 (removing the border). Also had to add a toolbar bc it wasn’t actually square when I designed [everything] so I guess there will be tools.

Thanks everyone for your kind feedback 😭 I will keep developing this then!

Thanks! This is my first game jam so I tried to come prepared :D

Hello peeps! My game I’m working on for this jam is called Bit Bonsai and it’s an idle game developed in PICO-8. It will be playable as a webgame on Itch and also a standalone app for Mac/Windows that you can run idle for days at a time.

The concept is growing and trimming a bonsai. At time of this post, I am working on developing the growth algorithm and trimming feature. Things I’ve decided to wait till later, and even possibly after the jam ends, include watering and feeding your tree, but I’d like to have many options for players to trim their bonsai to their liking.

I typically like to get player feedback during development, but to keep some of the game a secret I will be posting screenshots. Lmk what you think!

Have a great jam everyone!