so excited for this!

Also, each character (both RO and non-RO) seems to be really well thought out and has something interesting about them... except Cerri. Cause screw her for always taking my man :)

I read this when you released it early on Patreon but I'll comment here too.

I really like the different choices we can make when it comes to how traumatized MC is (and what MC is traumatized by).

I've always been a fan of broody assholes (yikes, what does that say about me?) so, naturally, Ruben appealed to me right away. Looking forward to gradually reading that Ice King thaw out. I think there was already a moment or two where I was like "AHA! You do care, at least a little" although I think the anger/outrage was  more about the treatment of MC rather than MC specifically.

One thing I was slightly confused about (although it didn't impact the story in  any way) is whether or not the situation with MC's parents is the same on every route. If I'm remembering correctly, on Ruben's route, it seems like MC's basically saying they sold MC off (or didn't care that MC was taken) but in Nouritis' route, it seems more like MC went missing or something and their parents have been distraught ever since. Is that a difference in the relationship/backstory with MC's parents or is it just because in one route (Ruben's, probably), MC is working more off of assumptions and believes their parents  abandoned  them even if it's  not true?

It kinda references Step 1, but it also references Step 3! If I'm remembering correctly, if MC gets upset about growing up and stuff at the joint dinner towards the end 3 and ends up going to the car, Cove'll cheer MC up by saying they should just forget about everything and become pretzel shop owners... pretty much. It's obviously a lot cuter in-game than I'm making it lol.

Loved it, of course. I just wish there was a way to get Cove to propose.

Loved the side story. I'm a huge sucker for Mathias, so it was nice to be able to see those romantic feelings actually lead to something. I think the character that I'd want to learn more about is the MC, especially past events, but I'm sure some of that mystery about the past is intentional. Another would be Curio (mainly because I'm skeptical of him for some reason) I can't really think of a favorite/least favorite thing; I enjoyed it all, I guess?

I'd like to see more side stories, as long as creating them isn't a detriment to progress in the main story. I know sometimes creators start putting out additional content and then end up feeling overwhelmed at some point.

Wait, is Our Life 2 a separate thing from them planning on releasing other romantic routes in DLCs?

I also don't think it'd be out of character to Yuu considering how much he clings to/forced his way into having a friendship with Haruki anyway, tbh.

For future players: This should probably be considered a kinetic novel. There's only one choice, and it's a false choice.

But why is nobody asking Sebastian WHAT HE IS lol.

Gonna throw this out there re: the age gap. It's totally possible for two people to be involved with each other while both are under the age of 18 and then have one cross the threshold. My "high school sweetheart" and I had a three-year age gap but we started dating when I was 14 and he was 17. By the time we broke up, I was 16 and he was 19 (and still just graduated high school b/c he started school late), so - to me, at least - the 16, 19 age-gap isn't inherently "gross."

Just figured I'd offer a different perspective based on my actual life lol.

Hm... I generally enjoy this game but I do think there's a weird lack of significance of choices. For my first playthrough, I wanted to do a strict Rashid route, meaning I was very intentional about not choosing options that resulted in hearts with anyone else, but then scenes don't play out that way.

I think the VN could've benefited from more attention to those kinds of things depending on the path the player's on (it also adds something to the replayability because even if the CGs are the same, the scene itself reads differently)... Something to think about for future projects, I guess.

I got ending five (Jian - video call). This game is adorable.

Thanks for the update! I'll keep an eye out!

I wanted to like this. The art is great. But I just couldn't get over how much of a brat the MC is. I get he's a prince or whatever, but he reads as really immature to me. He also just seems kind of... dumb.... Well, maybe naive is a fairer word...  Does the MC "grow up" as the story develops?

I generally enjoy this but I find myself irritated with the MC more often than not. She's very self-righteous. *sigh*

Not gonna lie, there's something about Flavio I was into for the brief periods he was around, but I love Reed too.

Lol, it's funny to me that my two favorites are the besties: Jude & Quinn. I'm definitely curious about MC's power, and what all these weird dreams or whatever they are mean.

This game is super cute. I find Sun kind of irritating (I empathize with Terra, tbh, lol), but I think this is an interesting idea and enjoy the different personalities. Looking forward to seeing the full version when it's released.

This is cute so far! Looking forward to the full release.

Loved this! I love a good friends-to-lovers path + flirty LIs, so naturally, Theo had my attention immediately, but Felix is also an interesting LI who I'd definitely replay for.

I'm curious about Alasdair (since I was hardcore Theo this first playthrough, I barely saw Alasdair) so I'll probably replay and get his help lol.

Basically, I think you've created at least two, and probably three, great LIs and an interesting story, and I'll definitely be following your progress!

So unfortunate that this game looks like it's dead. It was so good! The potential!!!!!

The idea behind this is interesting, but I find how... manipulable the MC is really, really irritating. There are also some kind of cringe-y moments from a consent perspective, which might be a weird thing to have qualms with when the MC is a serial killer.... but still.

Can't wait for the next chapter! I've played through all the roles, and Nomad is definitely my favorite (MC's personality most like mine lol). As far as ROs go... I'm a sucker for Raiden no matter which role my is in. I was almost frustrated with the MCs because they all seem to see Raiden in a negative light at first, but I loved him IMMEDIATELY lol. I  really like Erik's route as a Nomad too; I feel like I got to know him best in that route. I hope we can get justice for him before this is all over...

The one thing I was a little disappointed by is, so far, I haven't really seen any difference in gameplay depending on the race of MC (human vs. half fae), which was a little strange at some points (such as when Raiden, MC & Lucien are discussing something magical happening and Raiden says he hadn't felt anything then Lucien says of course he wouldn't, since he's human, but MC never indicates that they felt anything either, although they would've because they're not human and also, just when the topic of humans/fae comes up generally).

As a s/n for any Mac users: 1. This game DRAINS my battery, so I always just keep it charged & 2. When I downloaded directly from itch.io, I got stuck on the loading screen, but when I went through Steam (b/c you get a Steam key w/ purchase), it worked, just in case anyone has a similar problem!

I saw there will be 8 chapters. Do you all have a rough estimation of when this game will be complete?

Speaking of the demo! I would've liked a few more choices, I think (Part I (or Ch. 1 or however we're labeling these lol) only had two choices, if I'm remembering correctly). Having so few choices makes it feels more visual novel than game, but the story itself is interesting enough that it mostly kept my attention and when there are choices, the options are pretty plentiful, and it seemed like toward the end of the demo, more choices were coming up, so maybe I and II were just lacking choices because they were "setting the stage" for the rest of the story.

As far as characters go, I have a soft spot for broody characters, so I was surprised to that I actually like Jori most lol. Then again, no character really seems to fit the "broody" category. But back to Jori - His personality reminds me of a puppy in a way. It's endearing. Rae herself is... interesting. Even reading her with the understanding that she's meant to be seen as a flawed character, I find her somewhat frustrating/off-putting at times, and I'm not sure if that'll ultimately end up being a problem for me. But I look forward to seeing how this continues and I really liked the art/animations.

Still obsessed with this game, and my fantasy of a spinoff where we have a character romance Cliff.

First of all, love the art. Second of all, love that the cast is Black. Third of all, idc what Nova says, Soh is giving me life and I love him. (sorry Koh, you're sweet and all but ummmm...)

I hope this isn't dead!

The story is definitely interesting but I'm finding it difficult to get over my annoyance with how the MC treats her father. I wish we had more say in how she navigates that relationship. It's making it hard for me to connect with her, which in turn makes it hard to invest in her character/story. I'm also not too fond of Shannon's personality, so dealing with her is a bit... much for me lol.

That being said, like I said before, the story idea is interesting and I don't think I've seen anything like it on here so far.

I'm not sure why, but I can't get this game to play for me. I get the first line of dialogue, then no new text :( (I'm a Mac user)

Love this so far! Three has been driving me absolutely insane, but I think that's a love it or hate it thing because some others seem to appreciate Three's... initiative lol. I'm definitely gonna keep an eye on this.

I just started this but have been having a few issues. Note: I DL'd the most updated version available on itch.io (for Mac).

(this is in full screen): 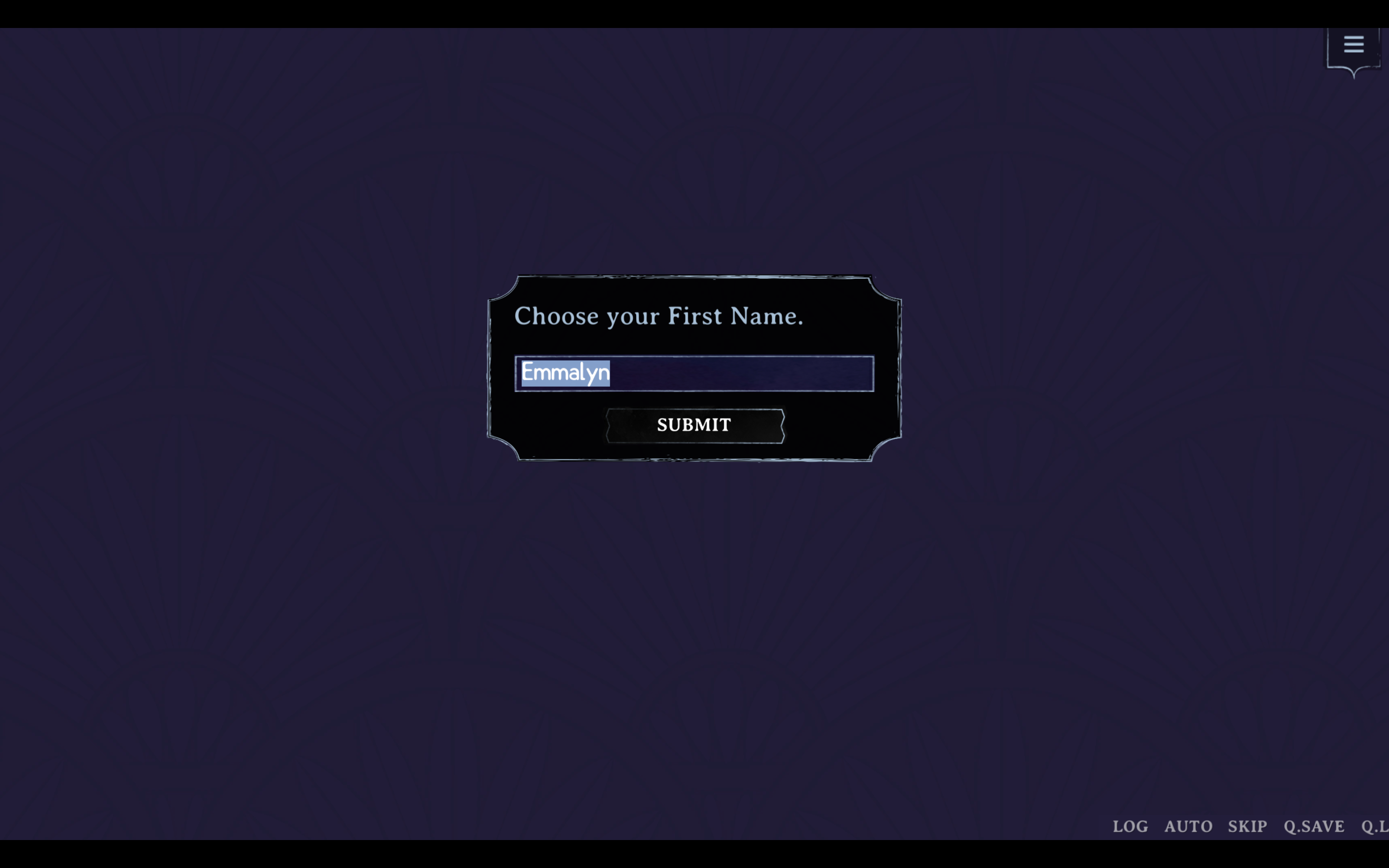 I like  the art and I'm looking forward to checking out the demo in its entirety once the resolution stuff is hashed out (because as of now, I can't save or anything so it's been difficult to play!)

Just checked out the demo! It's definitely an interesting concept, and I can't wait to find out where the fiance is lol.

I totally get it! I just connected those dots in my own mind.

I hope you all make more games like OL. It's easily one of my favorite slice-of-life/choice-based games!

So based on the current release schedule, there's no estimation for Leo's route yet or am I misunderstanding?