Guilty Parade
"We are the future of this World!"
Nozori Games
Visual Novel

Hello! Thank you so much for loving Episode 3, it's a great pleasure to us!

We'd be extra happy if you duplicate your feedback on Steam, it really helps the game a lot ^^

Hello! Thank you very much for your support and kind words! We are so happy you like the third episode ^^

It wouldn't be fair if we show all the secret points of the game right away ^^ You can ask on the Steam community or our Discord channel other players to help you open all the CG arts.

This is wrong. Please use Oliver's hints to make up the needed number combination.

Which numbers do you use to unlock it?

Thank you very much <3

The game is not free (except Episode 1) as we need not only to work a lot but to hire a professional English translator, buy music tracks and pay for a living. You can support the game and we could continue working on this project.

Hello! Thank you very much!

The full game consists of five episodes. Episode 2 takes about 5-7 hours of play. It will be released on Steam on January 6 ($4.99).

Thank you very much for your kind feedback, we are really happy you like the game so much. Your words do inspire us to work with much more enthusiasm as we put all our love into this project ^____^

We hope you will enjoy Episode 2 even more!

Thank you! We are happy that you appreciate our hard work! ^__^

The game is not free (except Episode 1) as we need not only to work a lot but to hire a professional English translator, buy music tracks and pay for a living.

Thank you very much for your kind support and waiting!

You can access the game menu by clicking the right mouse button or the particular button on the quick menu below the textbox (the game menu is available after a quick menu appearance during the interrogation scene).

Thank you so much! We are really happy you find the game interesting and fun. We try to release the 2nd episode as soon as possible.

We actually put a lot of effort to make a good game which everyone could enjoy. We are extra happy with your praise!

Hi, thank you very much!

It is a pleasure to know that you support our decision. We will do our best to make a good game!

We are working hard to release the full game as soon as we can.

We do not claim that music tracks were composed by us (it is written in "Resources" section of the game).

Thank you very much for playing and your feedback!

We are working hard to make the full game much more exciting!

We are super happy you like the characters in Guilty Parade and find the story interesting.

We plan to release it on Steam first and later on Itch too.

Thank you for your feedback! We are happy to know you like the demo.

You can send mistakes and typos you have found in the script to our e-mail: NozoriGames@gmail.com. We will definitely consider them. Sorry for inconvenience.

Thank you very much for your feedback! We are happy you like the demo!

We do not plan a Kickstarter campain for now, but you can support us here: https://ko-fi.com/nozorigames

Thank you very much for playing! We are happy to know you like the game!

If you need more arts the link to download them as ZIP file was added.

We are happy to know you like the game and will consider your thoughts.

Thank you for your patience! We have uploaded a new version for Mac OS, so please try to download the archive and then run the application.

If everything is OK please let us know.

You wake up in a completely unfamiliar place without any memories of yourself surrounded by hostile soldiers. What is that like?

The male protagonist gets a nickname Nemo and is forced to investigate a cruel crime in exchange for the Commander’s patronage. To solve the case, he joins the elite squad of soldiers and he needs to get the trust of his comrades in order to find the culprit. However, what if the murder hides even more secrets and solved mysteries will only raise new questions? Will his new comrades become his companions or enemies?

Nemo will have to not only investigate the crime but also learn to live in this new world and decide which side he is on in the military conflict. 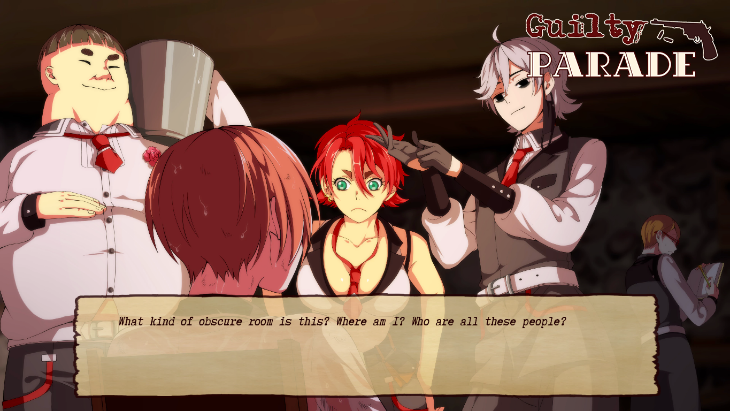 ► A chance to experience two opposite sides of a military conflict

► Secretly investigate the mysterious crime and search for clues

► Search for objects and interact with characters

Thank you for attention!

"We are the future of the World."

You wake up in a completely unfamiliar place without any memories of yourself and surrounded by malevolently minded soldiers. What is it like?

The male protagonist who was nicknamed Nemo is forced to investigate a cruel crime in exchange for the commander’s patronage. That is why he joins the elite detachment of soldiers in order to find a culprit by gaining their trust. But what if the murder hides more secrets and solved riddles will bring even more questions? And who will be his new comrades - companions or enemies?

Nemo will have to not only investigate the crime but also learn to live in his new world and decide which side he will take in a military conflict.

Subscribe on our Itch.io page and get the latest news!