Seeds of Destiny community · Posted in Some bugs in .362
noname19868 days ago

Hey, I have a question, how does the casino code work, a random variable 1-X=N, and then N generations of players to choose, if the player chooses >n or <n, the player wins, otherwise the player loses?

Because the lucky lady still cheats even if it's inflated, I wonder if it's the "fair" setting that I forgot

Thank you...seems to be looking forward to the sequel

English is not my native language, so I can only understand part of the plot. I have always felt strange about the plot:

The protagonist woke up and was forced to change into doll clothes. The glove puppet helped her along the way, but eventually became the last BOSS. At the end, another gear fell to the ground. Has she become a new kind of doll?

Jenny and the witch were talking to you as if they had met before, the red magician and other figures were like clones...

Reply
Seeds of Destiny community · Posted in I don't know how to get 'Heart flower'.
noname198617 days ago (1 edit)

only JOKER~ red The magician, you will also see his avatar in many places

Dear author, if you see it, I hope that the following changes can be made in the future. It may require a few more event switches, but I personally think it is relatively smooth.

She has too many lines, and she repeats a lot of lines when I make the mistake of multiple dialogues, I would like to add a "just say hello", "want to listen to another story." options, just in case Repeat the conversation. In the Temple of Damia, I would like to be able to choose to re-read the introduction to the Temple's story.

2. The lucky lady who continues to cheat

Even if she has a big belly, she will still cheat with me. I know that the story of Black Rabbit is not finished yet, but in order to get some money faster, a fair game may still exist.

NPCs such as the red mage, witch teacher, etc., they appear from different places. I know that although they are independent events, some of the lines feel like multiple brothers, and the lines lack some interoperability, rather than meeting multiple times by one person ...

4. Adjust the level of NPCs

Some NPCs will be maintained after expansion, I hope there is some means to control the size of NPCs, players can choose to set automatically or manually. NPCs also react to player choices...

5. The dialogue of variables

Use the variable system to randomly draw (refer to gambling) to make NPC randomly generate various dialogues. In addition, I would like to know how the gambling system is made. Can you teach me the general setting method, thank you.

6. Tia's fighting style is completely different from the three protagonists. If possible, redraw the fighting picture.

7. The tail of the classmate from the Magic Academy looks like a squirrel or a fox, not a CAT!

8. Can a teleportation point be added to the Bee Palace? Also, which music is the map of the woods outside the bee palace from RPGMK? thanks.

Hey, it's me again.(if you remember)

I'm ready to be baptized by the Black Doll Buster and enjoy the revised hand cannon...hope it doesn't disappoint.

I don't know if the maid outfit has been updated... (It's still my friend's question.)

Do you have any hope for an "extra content", similar to "Hank" or "Extreme Combat", where players can operate Alisha,partners,dolls,oldman,and angel-man to search for randomly scattered missions on the original map with limited supplies items and prizes and eventually escape.

Reply
Seeds of Destiny community · Posted in I dropped an embarrassing amount of hours on this game in a few days.
noname198624 days ago 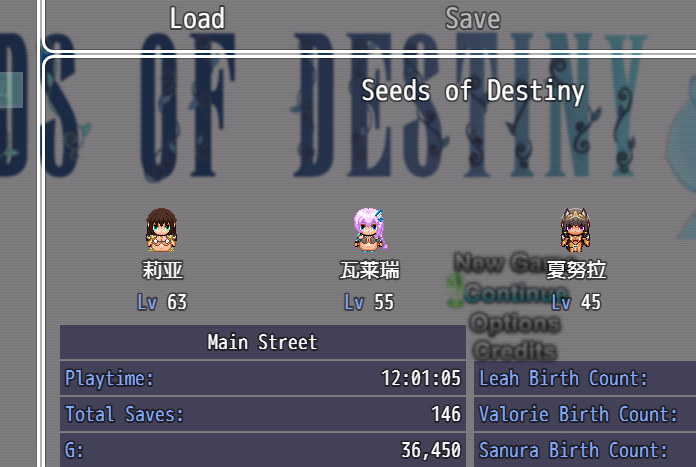 : in the business area on the right (not the suburbs), choose: one of the pastry shop, bar, coffee shop, fast food restaurant, talk to the NPC and choose "part-time job".

Reply
Seeds of Destiny community · Posted in How to find fairy queen?
noname198629 days ago

It seems to be an archived legacy bug, just need to investigate the fairy village and go to the throne of the house on the right to find her.

The achievement room system is still not perfect, and errors may occur when viewing vertical paintings and other conditions. The author once replied that it is not recommended for players to play here, because it may cause freezing and bugs.

The secret room I found:

1. The southeast corner of the early forest is related to the blacksmith.

2. At the intersection of rivers and swamps in the silent forest, a tree demon needs seeds, and there is a boss in the cave.

3. There are mines in the connecting area of the three maps.

I don't know the location of the other secret rooms

I think it's a pagan part of the story, but it's not, I'd like to see more details.

I prefer the new "expansive date" plot, but it's just the beginning.

RYU is a new npc.But what is the creepy she?

The bug still exists: if I click "Q" it may cause the "Fried Chicken Takeaway" icon to disappear, and if I enter any page at this time, it may cause a freeze.

Soda doesn't seem to stack up with Mentos yet.

There are no pictures of the sandwiches...

Use the old version to enter. In version 61, players cannot enter the orc cave, vortex tentacle temple, and beehive normally.

The western forest of the capital, the northern end of the western map,

1. Come to Chapter 2 (you can buy powerful weapons for Leah from DEBUG)

2. The two teammates will be framed in the capital, and Shanura will rescue you at this time (please record the name of the soldier when stealing the cake)

3. Come to the desert town, complete the Sanura pregnancy ceremony in the west temple and then cheat.

There is DEBUG mode in the upper right corner of the first temple, I recommend only getting powerful weapons until Shanura joins the team and then choose other cheats! !

Something went wrong in the fairy village! I can't give the fairy seeds, which makes the equipment of the fairy queen unavailable!

couldn't enter the tentacle temple in the sea, after that, I walked back and forth and pressed the space to enter...

Except for the boatman's bug

The boat call signal in the snow field prevented the ship from docking.

In the village of Naga, after Shanura healed, there were two...

In Naga's village, going south out of the map will cause the plot to get messed up.

In the village of Naga, even if you complete the story of Shanura, you can continue to repeat the story of the salamander.

After defeating the dragon girl, the plot repeats. If the player goes to the trial at this time, it can produce a funny battle.

Some known bugs and problems, please pay attention to save frequently when playing the game.（0.30）

1. Using the functional power, the police NPC mistakenly "eat" the wallet, which may cause a game error.

2. Giving any NPC double the gas bottle or stopper will cause a game error.

3. When the protagonist goes to travel, a MAX shape will be added. Using the phone to check the NPC at this time will cause a game error. If the NPC is in the MAX state, it must be a game error.

4. Restarting the game may skip the plot of the key to open the door.

5. Wormhole ability Giving some items to NPC may cause game errors or wrong results. For example: air pump.

Reply
Seeds of Destiny community · Posted in Next update when?
noname198667 days ago

how much did you pay？

The swimming pool above the desert town (Shanula's home) randomly appears. The picture is in the shape of a red flower. There is no prompt to pick it up.

Don't care about those people. Those people won't even give you a cent, they're just greedy.

Concentrate on your homework and don't delay your life with fetishes. (I don't know if my poor English can express the correct meaning)

In the capital sewer, I discovered a new area. In the far north, there is a mysterious masked man who seems unwilling to reveal more plots. Do you know who this person is?

Reply
Seeds of Destiny community · Posted in Need help with the desert temple.
noname198693 days ago

Sorry, my English is not my native language.

1. After the player gets the gem, go to the end of the right side of the entrance of the temple, you can come to another map, there is an altar in the north of this map, you can put five gems into the temple to restore prosperity.

2. After the prosperity is restored, players can go back to the empty chest of the temple to find the cat girl's doll, and find the goddess to upgrade Shanura.

3. Some items are needed to upgrade Shanura. Among them, the tiger lily randomly appears beside the bathroom in the desert oasis. It is a red flower. There is no hint to pick it up.

4. The plots in most areas of this game exist independently, and there are few missions where two maps run around.

Reply
Seeds of Destiny community · Posted in Need help with the desert temple.
noname198693 days ago

Sorry, my English is not my native language.

1. After the player gets the gem, go to the end of the right side of the entrance of the temple, you can come to another map, there is an altar in the north of this map, you can put five gems into the temple to restore prosperity.

2. After the prosperity is restored, players can go back to the empty chest of the temple to find the cat girl's doll, and find the goddess to upgrade Shanura.

3. Some items are needed to upgrade Shanura. Among them, the tiger lily randomly appears beside the bathroom in the desert oasis. It is a red flower. There is no hint to pick it up.

4. The plots in most areas of this game exist independently, and there are few missions where two maps run around.