Hatnix mentioned it today, very cool! I didn't come around to trying it yet.
I did construct a possibly unsolvable one by slightly modifying the unsolvable one (we had something similar to yours: https://ibb.co/6XDt3bx). Essentially what I did was exchange the two ones in the corners. We manually got it down to two tokens but not solve it yet.

Someone else and me wondered the same and found one starting arrangement that is not solvable and slight variations of it where we aren't sure. We got that down to 2 tokens so far. I think the chance of getting an unsolvable one is very very slim, but we try to find out more conclusively.

Well it just needs the runtime and some configuration, but it's fine. As I said, it was written for a different jam anyway.

Which upload is the correct one?

Cool that you also used love2d :]

In case someone wonders, the source is in the ZIP file on the game page.

Cute and nice idea. Unfortunately on my old laptop here the performance is too bad to play it properly.

Thanks for the answer. Are you using a custom engine or is the game based on a common game engine like Unity?

In addition to what others wrote: unicode characters can be entered during character creation but aren't displayed in-game. Tested with the character ä.

Also there's a ton of tutorial text at the beginning, no one will read and remember that.

I'd recommend starting of with a smaller, more focused experience.

I saw Nook play this, looks cute and I like sea themed games. Do you have any plans for a Linux build? Is it technically possible with your engine?

Thanks! Works as expected. Well, almost. This page may help: https://docs.unity3d.com/Manual/SL-PlatformDifferences.html 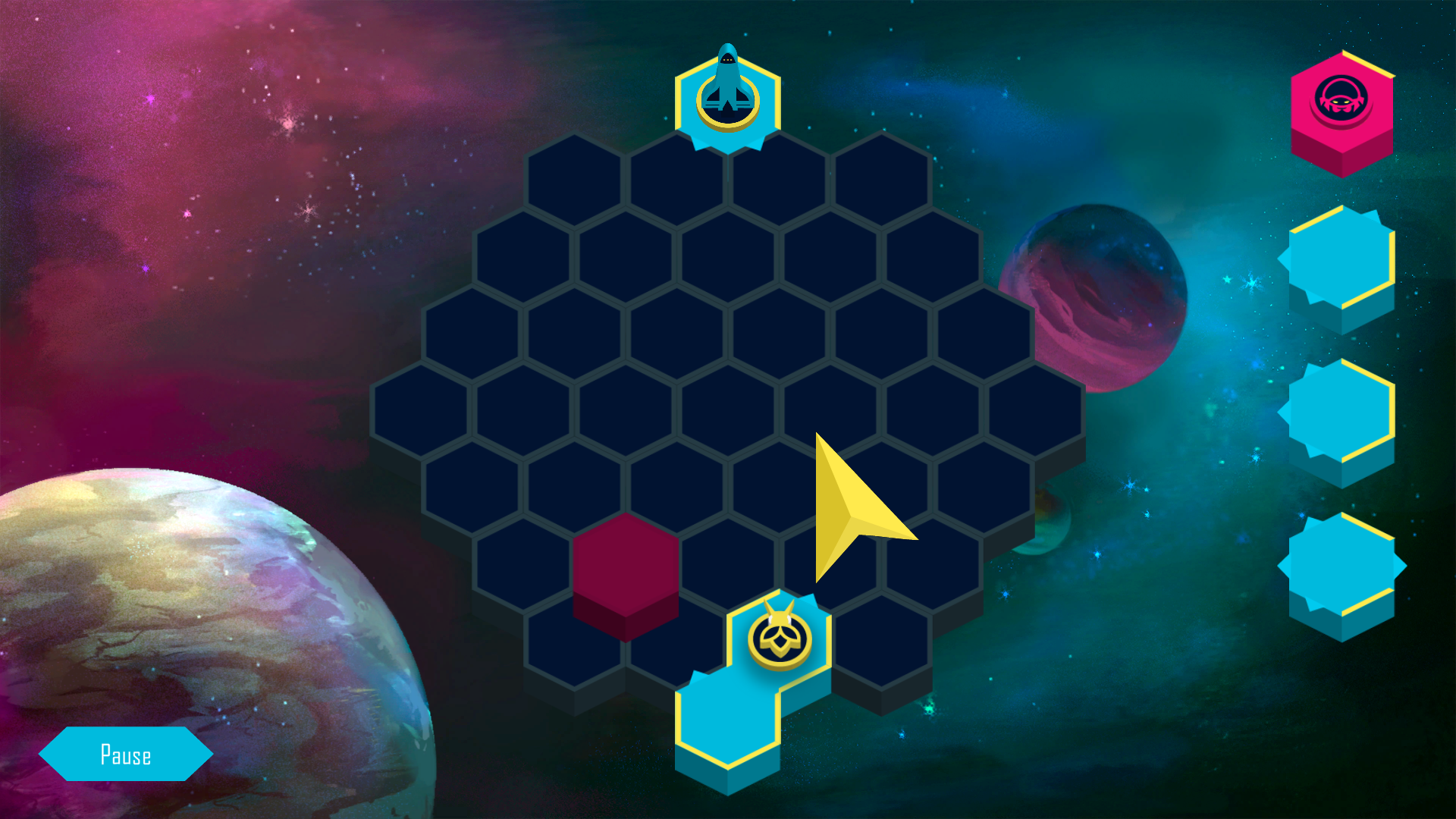 Congratulations, this is quite an impressive jam entry!
I gave some feedback on the difficulty and how to possibly improve it as comment to the Post Mortem. I hope you'll give it a once-over.
Would it be possible to have a Linux build? Thanks!

My thought was that even when the basic game gets easy it still gets harder over time because of the increasing number of mites. It may shift the game focus a bit, from trying to build a path towards avoiding mites.

Thanks for the nice writeup!
The game turned out really well and seems highly polished, with the exception of balance that you mentioned. I think as a quick fix you could skew the distribution of tiles towards more open sides or, possibly better, give the player more tiles to choose from.

Thanks for trying!
Sway, that's using Wayland, good to know it works there as well!

Thanks for your feedback!
Yes, no SFX, but if the music works so should SFX. It's a very simple game I hacked together during the three hours of trijam last summer, but as a test balloon it's sufficient.

I stream as well, but not just game dev. I'll likely stream some decade jam development at some point.
https://www.twitch.tv/sir_diealotalot/

Reply
Decade Jam community · Posted in Who has TWITTER?
murks299 days ago

Reply
Decade Jam community · Posted in I will be 23 when this jam ends.
murks299 days ago

Definitely a nice idea. I joined the jam, but no idea yet. Luckily I have some time to consider.

Pretty cool Adrien. I just gave it a short try and soon figured out the basic concept. I think what's missing the most is user feedback. E.g. it's hard to see whether you actually hit an enemy. Some take two hits and you might have hit it but don't even know. That kind of thing.

I think it might also be buggy, shooting through walls may be possible for you or the enemy, but I'm not 100% on that. On the other hand that could also be a level design element, walls you can shoot through in one direction. https://en.wikipedia.org/wiki/Embrasure

Yeah, that was what I was thinking. It's probably also possible to cut the engine bit from the fused Windows version, but that sounds messy in comparison to extracting the .love from the OSX zip.

Getting that AppImage stuff to work is really not straight forward, so I don't blame you. Maybe I'll put up a guide once I managed myself. It kind of sucks to not have a Linux build that "just works" as developer working on Linux.

I wish you relaxing holidays!

About time I paid for this inspirational Löve game. I saw it years ago in the forums and it shows that a single dev can make a very neat game in Löve.

Maybe you can make an AppImage or something? I know it's not as easy as it should be. I'm sure I can make it work anyway.

About time to pay for this very inspiring game. Thanks!

Apple really doesn't make dev life easier. They pretty much abandoned OpenGL years ago and now want to get rid of it completely in favor of their proprietary API. Now they get rid of 32 bit support and do some silly useless "notarisation" shenannigans. I hadn't heard about the WINE issues, but it seems to be due to the missing 32 bit support.

My guess would be, if you want to support OSX, that the AGS SDL2 port is your best bet.

I wrote you an email and streamed the demo using the native Linux AGS runtime, you can watch it here: https://www.twitch.tv/videos/518500301

Ahoi there! Congratulations on the new demo!

I'm looking forward to trying it. Unfortunately I couldn't try it yet since what you uploaded isn't actually something that works across platforms, it is Windows only.

However, I'll try to get it to work on my Linux system and can try to make a more general Linux build (and possibly OSX) for you if you are interested.

Well, I played for a couple of minutes and it starts to get annoying.

Nice style and might be right up my alley as I'm a sucker for nautical as well as games with roguelike elements.
Do you plan to release it for Linux as well?

The official website link in the description seems wrong.
First off it unnecessarily redirects via Steam, then it redirects to a seemingly unrelated site (with self-signed cert). Please fix.

Nice game, I got it during the Halloween sale and played it for a couple of hours yesterday. I think it is mostly held back by the UI, which I find to be convoluted, overloaded and taking up far too much screen estate. I encountered a bunch of other issues and it's often hard to tell whether it's a bug or I just couldn't figure out how to do it. Builders insisted to repair all damaged buildings rather than building a new one that might have saved the colony. Builders sometimes didn't harvest nor get the stone required to build for unknown reasons. I can't figure out how to build new log roads, but the road builder happily repairs pre-exisitng ones. Manual install on Linux is a bit cumbersome since multiple files need to be marked executable first (at least start script and jre).
My first colony, on standard, didn't go well. First people died of heat (in the spring), then someone died of dehydration, then they died of starvation and the last remaining survivors got eaten by Zombies. Afterwards I could not continue playing because apparently for that you need migrants, so I had to reset the map. I was surprised that the world didn't get re-generated, it is exactly the same, only without my failed colony. Maybe peaceful mode is better for first time players.

Just pee on the other dogs. Let me know your high score!

Is suspect the demo downloads are simply not marked as executables for the respective OSes on the site, hence the itch client doesn't offer the installation option.

I tested a bit and unfortunately it happens with other browsers as well. The whole web build tool I use there is unofficial and not currently maintained.

Please use the desktop builds where possible.

One workaround is to use the alternative control scheme, which is WASD instead of the arrow keys. I'll add that to the controls documentation.

Thanks for the feedback, I'll see whether there is anything I can do about that.

I delivered a broken Mac build myself, but it's hard to test since you have to own a Mac to do so. Linux you can at least boot from a thumb drive or a VM.

The Linux distribution used doesn't matter for the most part. Especially in this case, if it is indeed a rendering issue and not me being stupid, I expect it to fail on all of them since the game will use OpenGL rendering regardless.

You could just mention that the build is likely broken, it's up to you.

Oh, and there is this website where people come together to write a guide on how to ship on Linux. It is pretty new, but I hope it will be a helpful guide eventually: https://gradyvuckovic.gitlab.io/linux-game-shipping-guide/

I tried with keyboard and mouse.

I recently helped someone so I have a vague idea of what might be wrong. While Unity makes it relatively easy export to multiple platforms there are platform specific differences the programmer needs to take care of. Some rendering differences are documented here: https://docs.unity3d.com/Manual/SL-PlatformDifferences.html