I was having fun but had to stop on level 19. It's just too hard. I really like the variety in the challenges. With some tweaking this can can go along way! Oh and it starts on level 11, is that on purpose?

I included a couple of this monsters in my game even though I'm working with mostly original art. Great stuff there man!

Great job man! I bought it even though most of my game's art is original. I just had to include this hehe

Glad you like it! As a matter of fact, yes there'll be more levels in a update I was  working on since many people asked for more. I'm kind caught up now with other stuff but it will be released eventually :)

Thanks! glad you like it! I'll definitely consider your feedback and revise those sounds haha.

haha all right thanks. It needs a tutorial :)

Yes you start with double jump :)

The sound track is not mine. It's stock music and not exclusive. Glad you enjoy it! I might get a special version on it in the future who knows.

Great! Glad you like it. Yeah that tag is a good idea. Really nice video on it. Thanks man.

Reply
itch.io Community » General » Release Announcements · Replied to homunculusgames in Not your typical metroidvania combat(smash bros like), would like some feedback on the demo.
MuriloDev1 year ago

Thank you! Glad you like it! Yes, a tutorial is needed, it's in the works :)

Yes, a separate roll/block is totally something I've considered. I'll have this as alternative but not remove the current way as it's like the smash bros games and a lot of people like it that way.

So, for the first image, you have to beat that third stage to get a 'dash' move and the second image just double jump and do a 'up+special' to do an uppercut which would be a 'third jump' and grab the ledge. but if you leave some trees intact during the fight you can climb them to make it easier :)

Reply
itch.io Community » General » Release Announcements · Created a new topic Not your typical metroidvania combat(smash bros like), would like some feedback on the demo.
MuriloDev1 year ago

Hi guys! Overplasma is an  exploratory platformer with focus on challenging but fair combat, where the player has a diverse move set and defense abilities but so do some enemies!

I've put together a little demo and would like some feedback on it, especially the fighting part (I'm not aware of any metroidvanias with combat like this).

Even though the demo doesn't have all features like level up, all skills etc, it does allow you to have a good feel on the core combat mechanics. And to get you in the mood, it does feature a couple of levels, sub-boss and a proper boss!

You can grab it here: 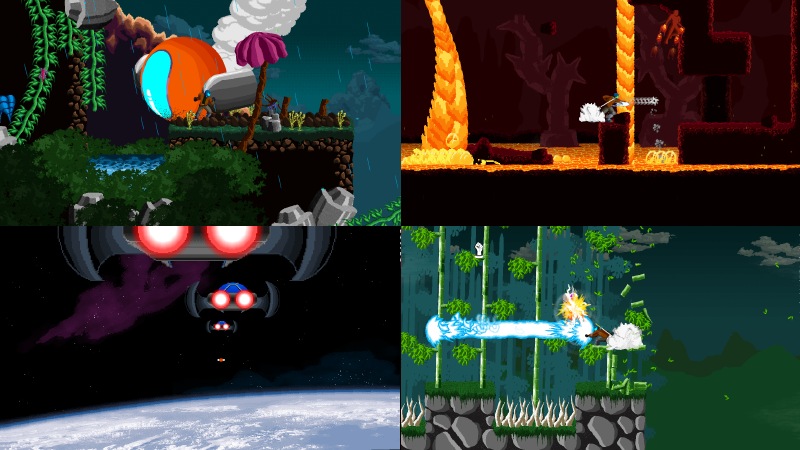 Wow thanks a bunch! Glad you liked it :) And thanks for the short review and video.

Thanks! That's the intention :)

Hey nice! You got far. Yeah, not so easy haha

Pretty weird! Have you tried the new version (1.3)? It fixes controller issues.

This was freaking great!! I enjoyed it to the end.

Hey good to know Russians liked it :) I'll be sure to look for you when I go back to the game (or another project) and add support for that! Thank  you so much for the offer! I do have plans to support other languages!

Thanks! I haven't tested on a real xbox controller, just some virtual software. So I'm not even sure, still working on it.

Appreciate the offer. But that would require an effort I can't do right now as the engine doesn't support Russian characters.

Working on it :) can you tell me if you're using a DInput controller or XInput (xbox) controller?

You can change it in options using the mouse or arrow keys+ENTER. It's defaulted to a gamepad but I'll change that in next version :)

Not at all. I don't have the skills and NES can't handle what's currently in there :)