Hey! The way the process works is by calculating separate C, M, Y and K values using the input image, and mixing an appropriate amount of "inks" on top of a "paper" backdrop, very similar to how actual printing works. You could get the "inks" value separately, but as there's no "white", any bright areas would result in transparency (the process basically overlays this result on top of a "paper" texture). 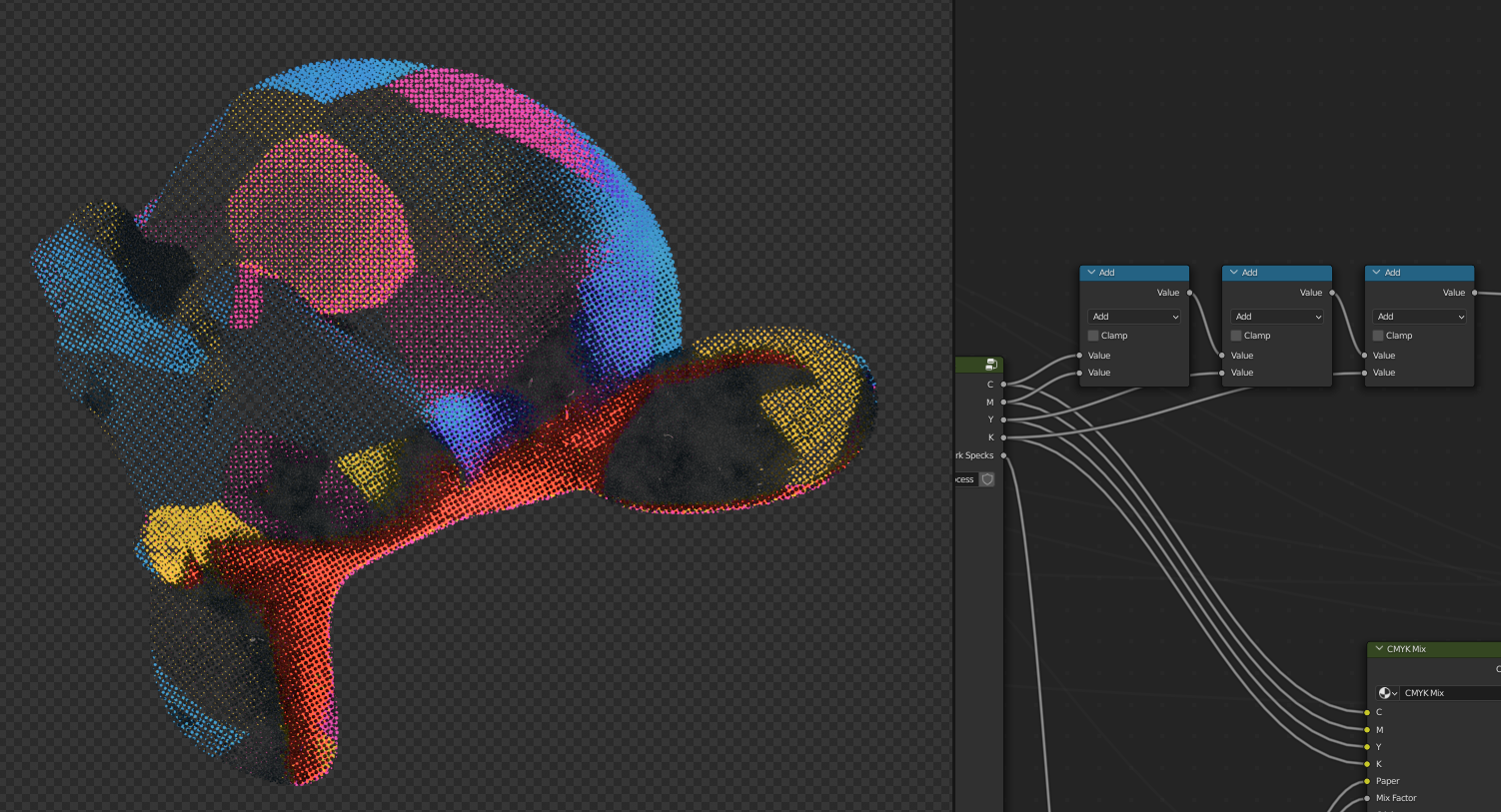 You could get around this by mixing the entire shader with a transparent shader using the input image's alpha as factor, like so: 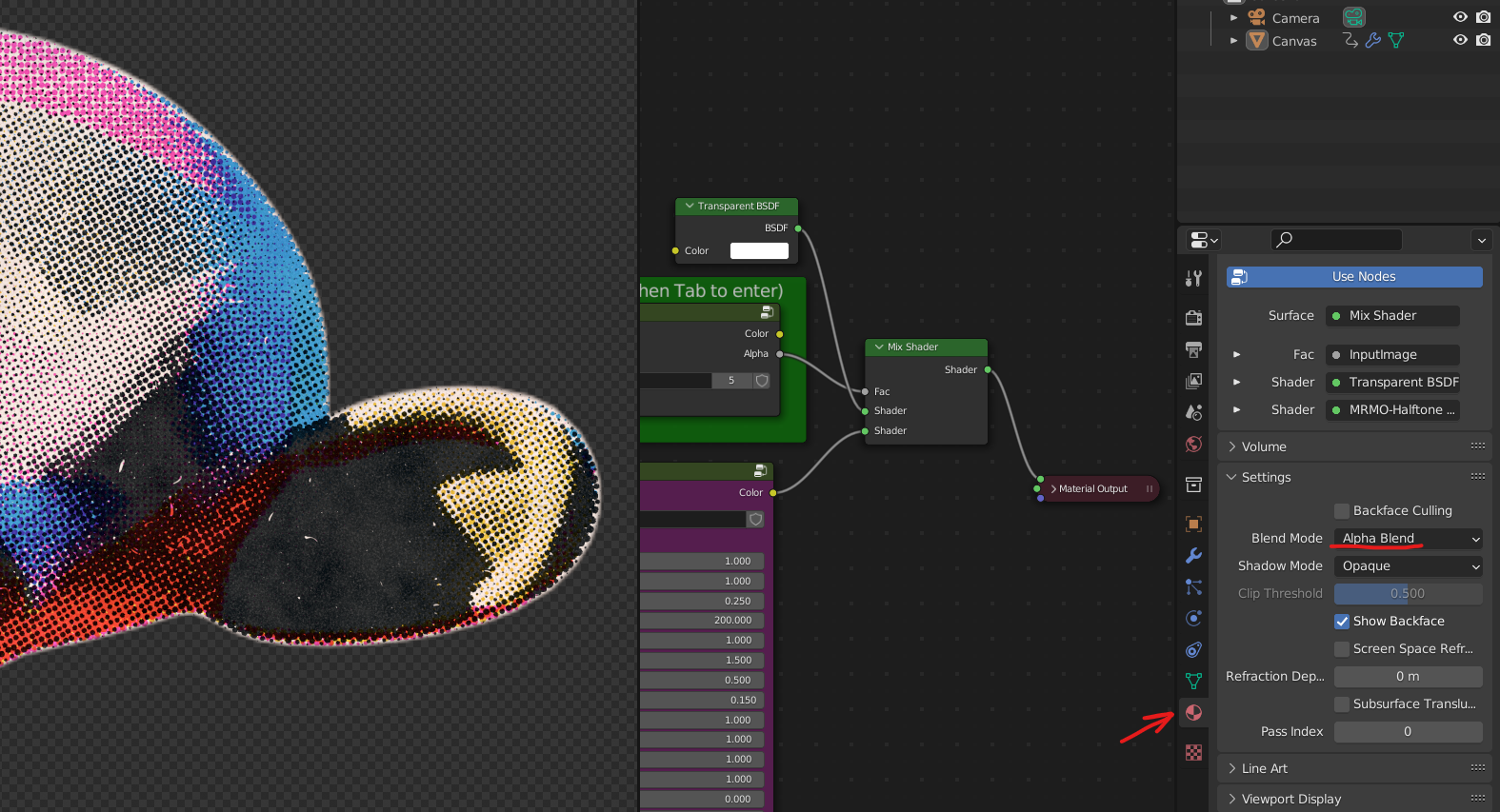 The alpha obtained this way is not perfect, though.
Another, more complicated way would be to introduce a "fifth ink", based on the alpha instead of colors, which would make the transparency "halftoned" too; this would require modifying the halftone subprocess group to have an additional "alpha" output, and using that as the mix shader factor instead. This would also definitely fall outside of the scope I designed the process for :)

Thank you for helping me troubleshoot this; I've downloaded Blender v.3.0.0 and it is indeed a Blender version related issue.

In the "Normal Paper Texture" node group, these nodes are not connected properly if opened with older Blender versions, due to Map Range node being updated to support Vector inputs. 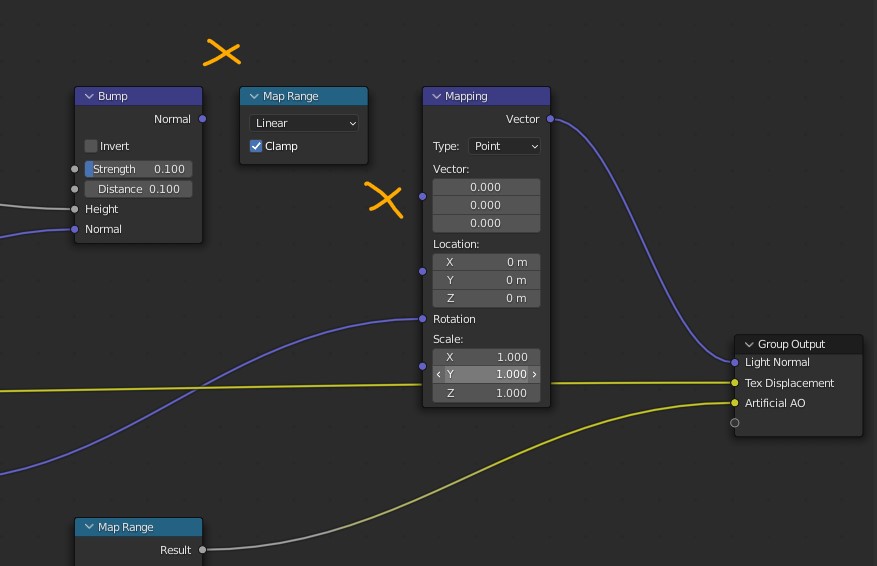 If you're unable to use a newer Blender version with MRMO-Halftone, you can bridge the missing connection like so:

This should allow you to use the "Paper Crumpling" feature, as it should now generate a valid output.

Depends on how you want to do it; the shader process is completely contained within Blender and does not work outside of it, so you wouldn't be able to use it realtime in Unity. You can render assets as textures in Blender, save them as images and use the result in Unity.

Also, does changing the values in the "Lighting Setup" node do anything? I've managed to reproduce your result by setting all three light intensities to 0, which leads me to believe there's something wrong with how Blender does calculations there.

Hey! This requires me to do some troubleshooting, could you please share your basic hardware specs? Also, what OS and Blender version you're using?

At a first glance, this looks like a Blender issue of some sort, I've tested the process on the lowest-end hardware I could find that still can run Blender 3.x (an i5 laptop from 2015 with integrated graphics, running Windows 10), and after chugging along compiling shaders for almost a minute, it produced the correct result :/

Also, if you enter the shader node, and connect the "Light Normal" to the Group Output, what does the result look like?

Hey! I've identified the problem, and will try to implement a solution as soon as I can!
The halftone pattern scale is not calculated correctly for vertical-oriented image textures, and I think I know how to fix it :)

You can click on the percentage value and type in your own :)

Yes, I'm in the process of making instructions! For now, here's this simplified version :)

To preview the result, switch to "rendered" view: 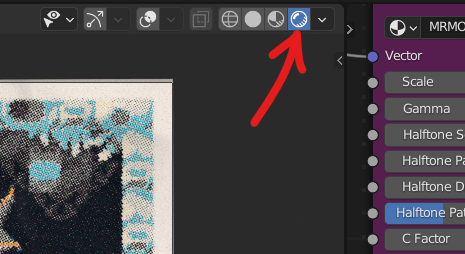 Select the InputImage node and hit "Tab" to enter (but I see you already did this :) 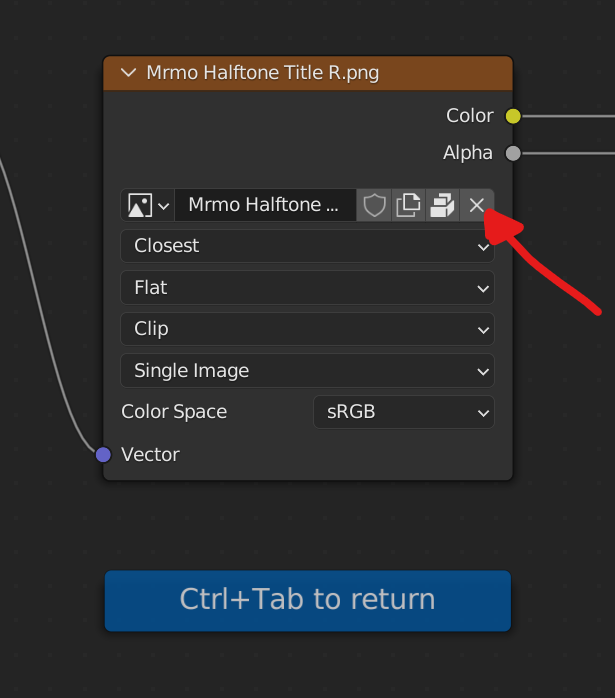 Load your own texture: 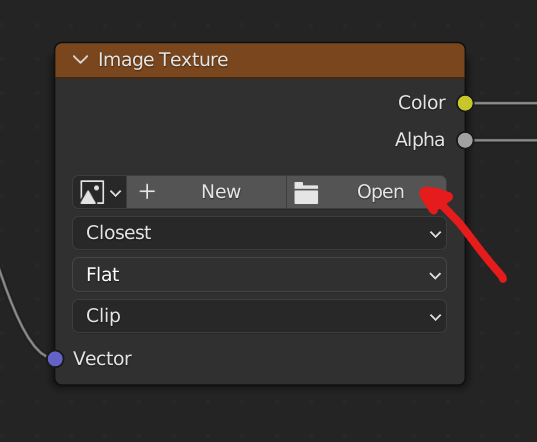 "Esc" should return you from the rendered result to the original preview viewport.

Without knowing the context, I couldn't really say. Depends on what the advertising is for :)

Hey! This is not an add-on, rather, it's a .blend scene with everything already set-up and just needing a texture (image) input plugged into the shader and setting up the resolution before rendering the result.

Ooh, I was thinking of adding those- now that I finally managed to complete the tileset, I might just make some additional character animations :D

I might make a trimmed down version of the tileset for that purpose- with all six variants included, it's way too big to work comfortably in Playscii :)

Polishing this for release took me a while, but it's finally out :D

Based on my original 2015 piece, "Underbase", this tileset features animated tiles in six variants of three monochrome tones, meant for recoloring into custom color schemes.

This is pretty cool! I started making a town :D 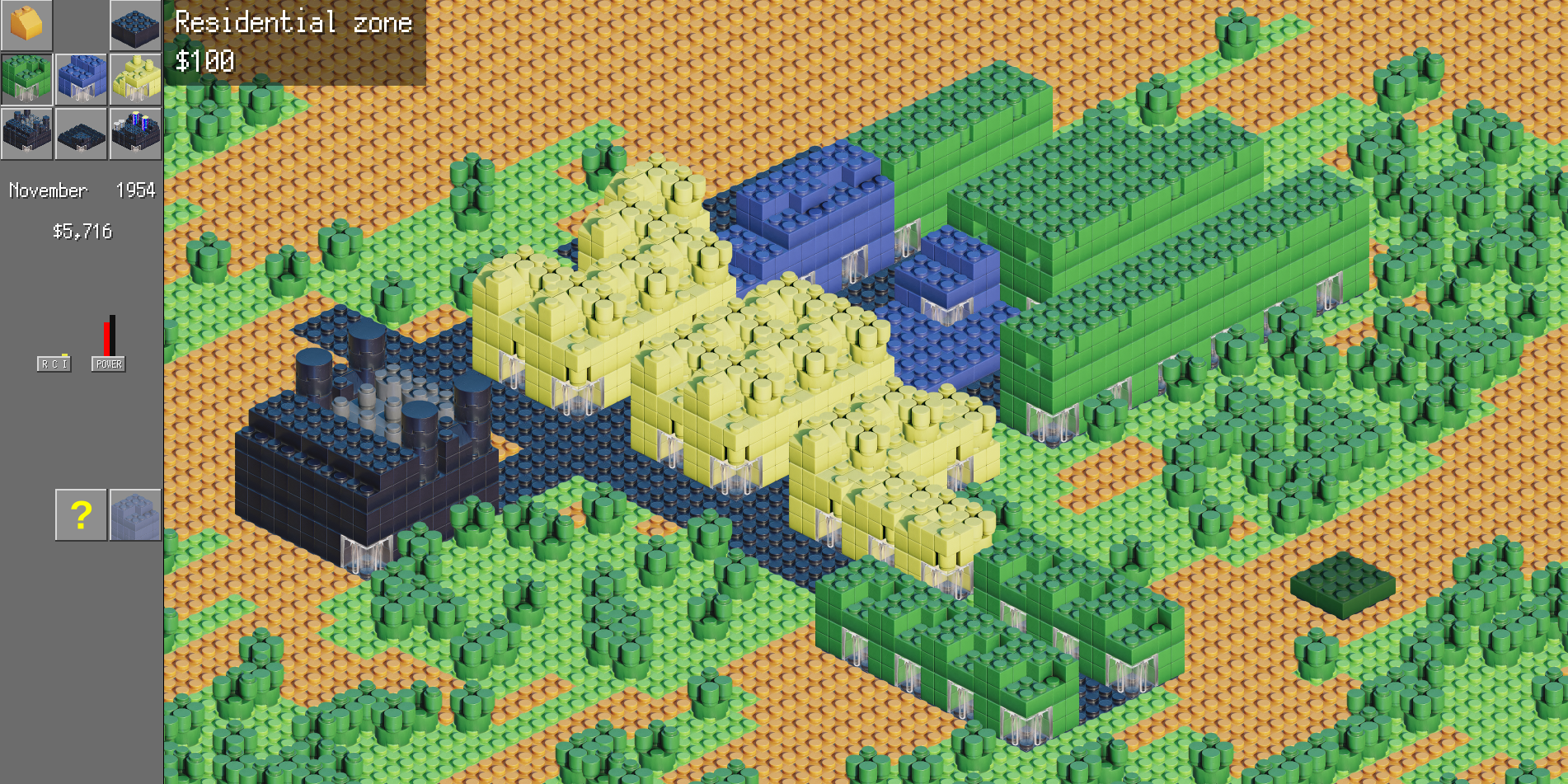 Hey! I'm glad you like it!
The majority of the effect is achieved using the material shader (the rest is camera blur, bloom etc), so sure, you can apply it to any UV mapped object and it should work!

Hello! The "color variations" image is the MiniAdventures tileset in 16 different color variations (the "color swatches" also included in the archive), with and without transparency.
It is just an example "meta-tileset" I included to show how you can get a lot of color variations by swapping the four colors of the tileset!

Hey! I will definitely try, I have some experience in converting stuff like this :)
Happy holidays!

Hey! MRMO-CRT is Blender-based, and is as such best suited for rendering various showcases or adding CRT "flair" to existing assets/images, as well as being used in Blender 3d scenes as a material shader.
Also, feel free to pick the shader apart and reconstruct it in Unity or other developer platforms/engines if you want!

Hey!
There's two "shopkeeper/quest giver" npcs, a bat, a skeleton and a cyclops with basic animations. They are all featured in the screenshots on the project page! They're meant to be "examples", as the tileset is really about level/dungeon/location creation; the tileset being 8x8 pixels, it would be very easy to create or import additional NPC sprites. I have also tried working with 16x16 sprites for both the protagonist and the NPCs and it worked pretty good.

The tileset comes with a basic Latin font (there's a list of the included characters/symbols); I guess if you have an appropriately sized Chinese character set, it would work fine with the tileset.

Hope this answers your questions!

The "specialized tiles" section of MRMOTEXT was based on MiniAdventures, but the tiles themselves are largely different; also, MRMOTEXT is 1-bit (2 colors) while MiniAdventures uses 4 colors. They actually work very well together, as MRMOTEXT can "expand" MiniAdventures with simpler shapes and some additional details. I might do a bundle!

I've worked on this tileset for quite a while now, check it out at https://mrmotarius.itch.io/miniadventures !

To see the tiles in action, check out this little Godot demo I built using the tileset! https://mrmotarius.itch.io/miniadventures-gdx

My first font release on Itch!

Check it out at https://mrmotarius.itch.io/precise-m :D 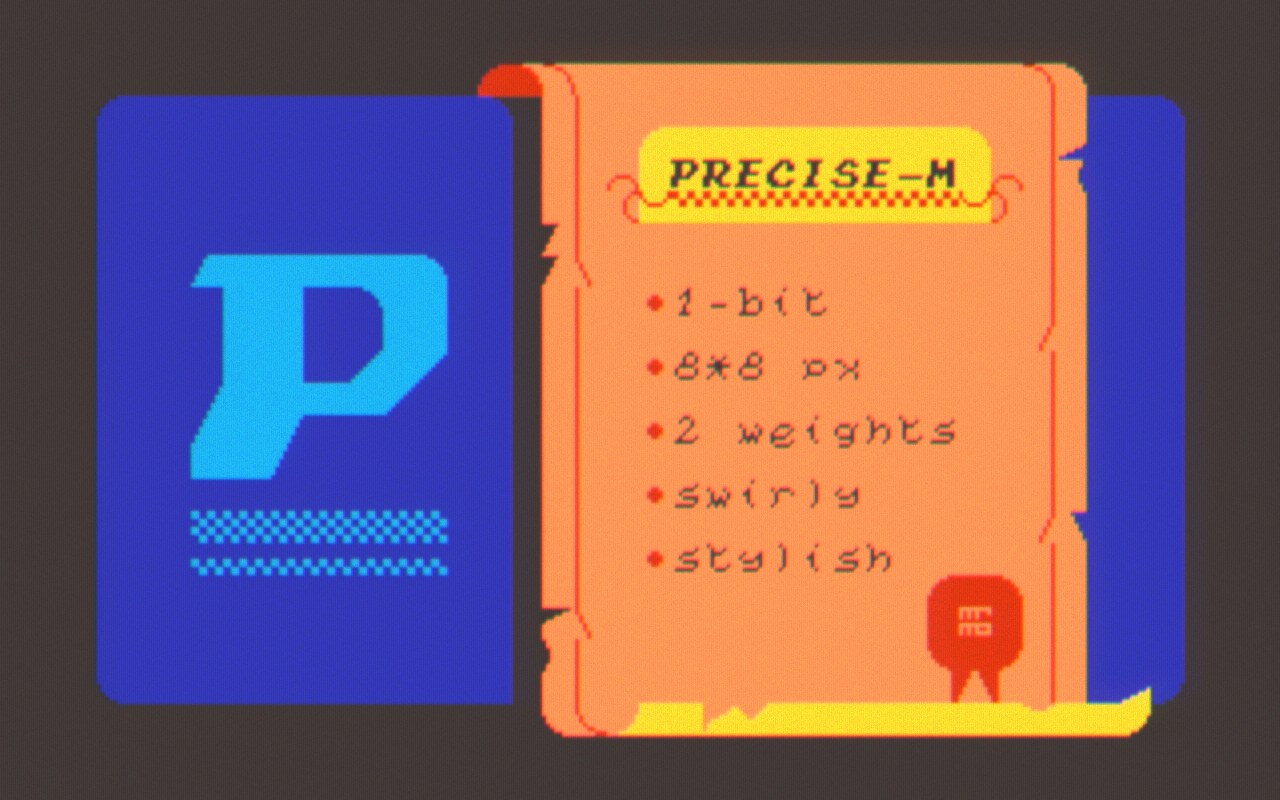 Turns out I really like making sprites in SpritePad :D

Hey! I was wondering if there's a way to preview the underlying sprite while editing its overlay sprite? I can't seem to find it.

Ooh maybe! I was thinking about ways to expand it, a "player" figure would be an interesting addition :D

I have no experience with macOS, but REXPaint should work with Wine?

For the "basic" version, just split the tileset in two horizontally- the first section is the "specialized" tiles, the second is the "shape" tiles.

The "extended" tileset contains additional three sections, that follow the "left-specialized, right-shapes" rule, except for the text/symbols section on the very bottom.

There's a few empty spaces left for some minor future expansion or tweaking, and there's a few non-text characters after the text section since they could not fit anywhere else :)

I usually start with the "shape" tiles to create basic geometry and block out the basic shapes, and use the "specialized" tiles to add detail and texture, but there's really no set rules regarding how you should use the tiles!

This is very nice! Great use of the charset :D

Yes! As an experiment, I've generated several "variants" of the tileset, with a few color combinations, and transparent/opaque background, imported them into LDtk and defined some rules, it worked really well!

Hello! I haven't planned to include my projects in any bundles yet, but thank you for asking!

Fantastic visual design there, ticks all my boxes :D