I definitely plan to concentrate on narrative games, as I have this entire setting and cast of characters for them, but with occasional side project smaller action games (I have a 4 player party platform wizard melee thing reasonably far along) its really nice to have palette cleanser projects so I don’t burn out (it can get pretty repetitive doing things like mapping and pixel art), but yep..

VNs will definitely be my next “big” project, wizonk is more just fun on the side (it’s really useful to prototype mechanics to use in CMO, and I think I did the bulk of its coding within a week? The rest is just tinkering and making more levels), but I’ll obviously be using Scorpion, so that limits me to the usual low res Amiga spec limitations (I like the limitations, I was going to work within them when I started making the VN in Tyrannobuilder.. I made my “house style” EHB palette for The VN, even before I knew I’d be making scorpion games. Sophie, the password screen girl in Hex Night was drawn for the VN, originally.

I appreciate the offer but really, payments won’t be processed through me most likely but the publishing partner (bitmapsoft, if they’ll still have me, lol), so wait until there’s a physical product to throw your money at, as it sounds like you’ll want a boxed copy. 😁 (I guess I do have a tip jar Patreon, but it’s really *just* a tip jar with no current promise of exclusive content.

Thanks again I’m glad you liked the demo, it’s a big game though, so I hope it doesn’t take too long to complete. 😅

Thank you for the positive feedback 😊 It's great to be able to make the game at all, I'm happy you enjoyed it so far!

After this is done I have plans for visual novels with RPG elements, but Scorpion is missing a couple of features I'd need first.

Oh my gosh! Thankyou! That's one hell of a compliment! 😮 I'm really glad you got it working, and enjoyed it so far.. Next update has a bunch more bug fixes and it's hopefully quite a bit prettier in some areas too.

Of course. 😁 I'm really glad you said you have a working WinUAE set up.. I guess you're used to using ADFs mostly?

You'll need to set it to have enough RAM and a powerful enough CPU, easiest would be to select A1200 from the quickstart menu and "4MB fast Ram expanded config" in the configuration box below it.. Decompress the LHA file (winRAR or 7zip can do this) and then add that folder as a bootable drive in the drive settings in WinUAE (screenshot included) then press start at the bottom.. 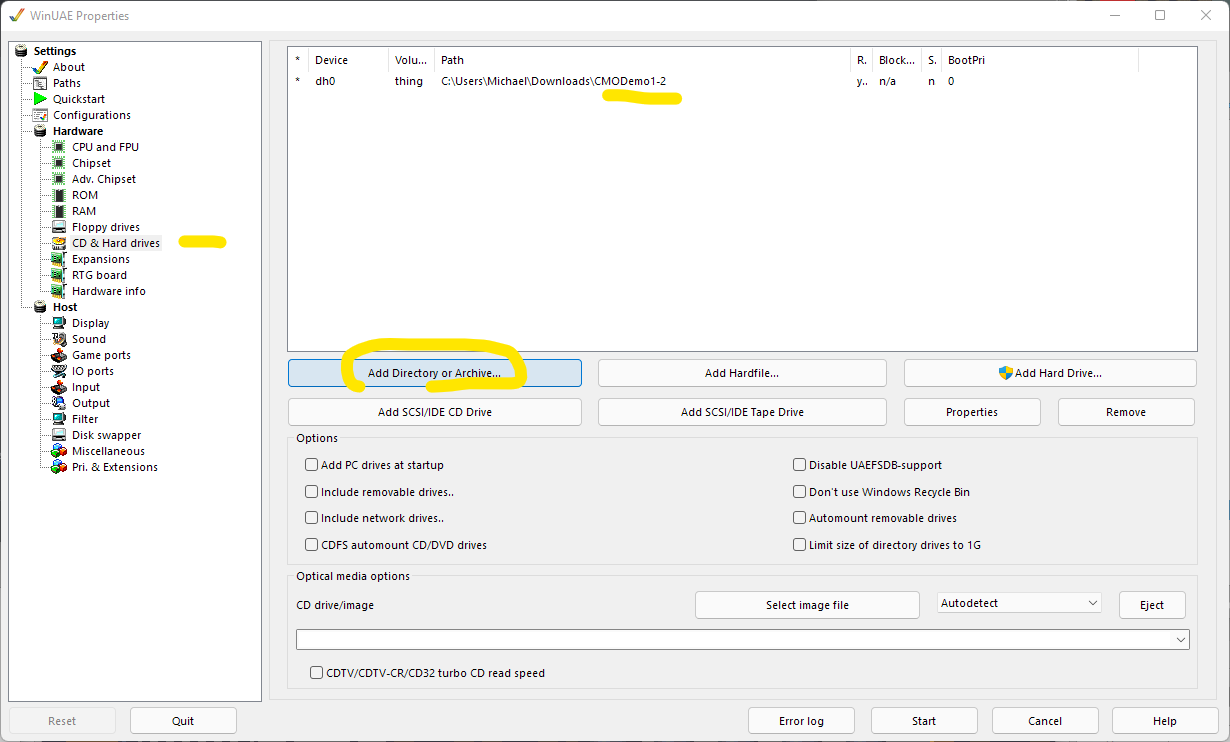 Hopefully that'll work. WinUAE can be really odd to configure.. But that's probably the easiest way without involving a whole AmigaOS/workbench installation.

Let me know if you have any issues.

1.2 is up, hopefully without issue. :) I don't know about PUAE but I've added the basic default scorpion whdload wrapper and an Amiberry archive just in case - do you get an error message when the standard exe doesn't load? (it might work in this latest build, maybe?)

The final game? Sure.. It already takes a good while to find all the hidden stuf in the demo. :) I'll do a speedrun of the levels I've already made but i think its already around an hour if i power through it avoiding enemies etc. It wouldn't surprise me at all if the final game has a 5+hr campaign but it's difficult to be certain at this point.

Oh yes, certainly.. 😊 I'm working on the 1.2 build which should be up in the next day or two and I'll include a few different formats for compatibility's sake when i upload that.

Oh excellent! thanks for trying it out and I’m glad that worked. 🙂

I’ll definitely be supporting Windows and Mac eventually one way or another. 🙂

Ahh, I have an ACA1233n with the same spec, you’ll probably either have to boot with no startup sequence, reduce wb resolution, or have a blank wallpaper.. (if you’re running Fblit or the P96 native library in workbench that should help get it loadable) it needs about 1.8MB free chipram. Fingers crossed!

Thanks! I'm not 100% sure I understand, but currently you can play a version of the demo in AmigaLive, which is probably the easiest way to get it working without figuring out a lot of emulation stuff.. I'm not aware of any online emulator that runs demanding amiga games like this.. It will support non amiga-users soon, but i can't really talk about specifics yet. 😊