I JUST PLAYED IT AND WHEN I GOT THE THE END SCREEN I CRIED SO HARD?!?!

Have a good time with Cove Holden, friend.

I MORE DAY I CANNOT- First off all though, I needta speed through this pile of coursework I've been procrastinating on.

Oh, it's nothing major! I doubt many people would mind (it's just that my grammar buff brain caught it, lol). I didn't get screenshots for everything, but I do have two!

I also have this: 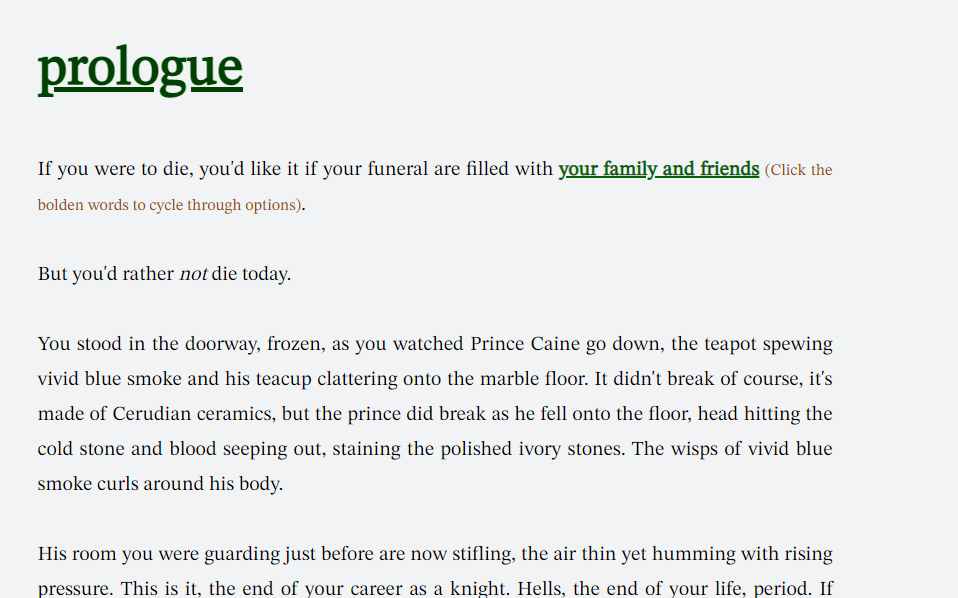 The grammatical errors I found tend to come up when you use "are" for sentences and transitions that should have "is" instead. There were also times when the tense would ping pong between the present tense and the past tense.

But don't let what I've said drag you down. Your writing is vivid and very immersive! This wip has great potential and I'm excited to see where it goes next! A few grammatical mistakes isn't the end of the world and, seeing as this is a beta demo, are to be expected! Have a great day/evening/night!

This was really great! I love how you describe things and your prose is great! I only found a few typos and some mistakes with the grammar, but other than that, it was great!

This game is great so far! Looking forward to seeing what comes next!

This is great so far! Keep up the good work!

Oh my god, this was absolutely amazing! I love the UI and the writing! Very excited to see how this story progresses!

Then, here's a wild idea- don't play it. If you don't like the game, you don't need to go into the comments and have a little b*tch fest- just do what us regular schmegular joes do and don't play it.

Oh my gosh, this game was so fun to play through! I'm incredibly interested in the lore as well as the characters so far, and very excited to see where this goes!

This story was pretty fun and interesting!

Sadly, no. These are brand new characters, and this game takes place in a different location. Besides the title and general concept it doesn't really have a lot of ties to the first game.

This concept looks so interesting! Can't wait to see where this goes!

Oh my god,this was one of the first demo's I played on dashingdon! I'm so excited to see the new demo and play it again!!

I've just played this game, and I gotta say, I really love it! I'm a sucker for management games, and I love how involved we are in this one. The main character is also really witty and smart (we love girlbosses in this house). Keep up the good work and I'm looking forward to more!! :D

This game is honestly so cool? I've been struggling with my gender for a while (I identify as Pangender but I'm still unsure) but I don't really have many people who I can talk about this to irl, so this game was pretty cathartic for me! Great game!!

This game is pretty interesting so far! I'm looking forward to more!

This is really interesting so far, and I'm excited to see where it goes! The UI is gorgeous as well!

I've been really excited for the twine demo of this game ever since I ran into the demo on tumblr, and it didn't disappoint! The UI is so pretty, and so is the art! Though, I just have one question: How do I input custom pronouns? Edit: Oh wait, crap, nvm, I'm just a dumb dumb. Great game! :D

As a writer, this was incredibly relatable. ( Now, time to stop procrastinating and try to finish worldbuilding my story. Wish me luck-)

Oh my god, this is so wholesome and cute?? As an aroflux person, I hardly ever see QPP's in media-even in other queer media- so this warmed my heart. Also, the characters?? Chef's kiss, they're both so warm and cuddly!

This was a really great game! (Unseelie fae queens are for smooching~) though, something weird happened to me- I only bought the dagger with me once, though on the third time I was forced to?

oH MY GOD YES- This was just so incredibly satisfying. I remember reading the myth of Orpheus and Eurydice as a kid and being like "Wait, that isn't fair!". Thank you for giving me the closure I never knew I needed- ;-;

Holy sh*t, this demo was amazing!

It should be illegal for someone to be that dang cute.

There's only going to be step 4, which is the end of the main game( at least, the part of the game that doesn't involve buying the dlcs.) I don't think you can marry cove in step 4, since that's a seperate DLC.

*cries* Bipoc gays, thank god for the bipoc gays- I honestly adore this game so far! The characters are messy yet so wonderful, the story is fun, and the art is just *mwah*!

HOT DAMN did this escalate quickly. Great game though- I genuinely love the horror aspects to it, and how well you conveyed everyone's personality!

This is honestly what I want my games to be. The art, the music, the story...it's wonderful. I remember playing it for the first tine and tears filling my eyes. Amazing.

This game is actually so adorable-

This game is actually pretty good! I got the old age, looking up, and shot through the heart by Bon Jovi deaths so far. I'm interested in looking for more endings! Great game!!

I was actually pretty surprised to find a game in Bengali on itch! I'm bengali, so I decided to play it and see if my reading skills were up to par (they were not, sadly ;-;).

As a bisexual person of color, thank you for making me feel seen. This game...it touched me, pretty emotionally. Like, it summed up all these fears I've had about calling myself bisexual and all these self doubts that I've never managed to express out loud. ( I also have a preference for masc presenting people so yeah, that screws with my head a lot) And don't get me started on how many people consider queerness as a whole to be "white people crap" which is just stupid on so many levels since pre-colonized countries have been historically known to embrace queerness-andddd I'm rambling now.

TL;DR: Thank you for this game.