In demo, only NSFW scene for Mads. Ragnar and Citali both have 1 SFW CG :)

It is the same artist :)

Thanks for the report, will be fixed soon in 1.05!

- For the police quest 2, you've got to talk to Hunny when he's in the clothing store.

-For the ranch upgrade, it's Building Material 3star that is needed (I need to make hover-able item name shows up for the level up screen x'D), which recipe is obtained from book called DIY projects.

Oops, that's a bug indeed. I... seem to have forgotten to hide the black transition x'D

Yeah, you can get inside the forest after the surviving after 7 days is over.

I might shorten the length to something around 3 days then?

The pack is amazing! Already bought the bundle =D

Do you have a base template to make it easier for us to make custom characters with this style? Thank you! ^_^

The demo will be made public in a few months. It's still in ALPHA right now, so yeah, too many bugs to release to the wild.

There will be sex CGs with him as merman! (I just need... some ideas regarding merman sex xD)

Banana Ranch most likely won't be approved by Steam, since it has shota characters with 18+ scenes. So, if the game is to be put on Steam, all 18+ scenes will need to be stripped and made into a patch, which is not something I plan to do in the near future.

Love your tiles! Would you consider making more comprehensive farming tileset that can match with this tileset? (with several types of plants and several stages of growth). That'd be amazing!

Production rate is more determined by the employees assigned to the factory (you can level up employees to increase their productivity). Levelling up facility to 3 allows you to assign one more employee, which makes production rate higher. Seeds need to be planted in correct season and have at least one employee with more than 0 stamina to maintain it.

Yeah, there is Sweet Lovers 2 book but I forgot which mission rewarded it... (No access to laptop now :x)

Oh, thanks for the report!

One only requires you to donate some money to finish the quest. The other one is making angel statue, I think.

Might just remove the dick sizes from all chara profiles and let players fantasize about the actual sizes in their mind xD (since I'm bad at gauging dick sizes anyway...)

This is nude Lex right now. Dick size should already be pretty big? I think I've put the wrong dick size on the char profile lol. 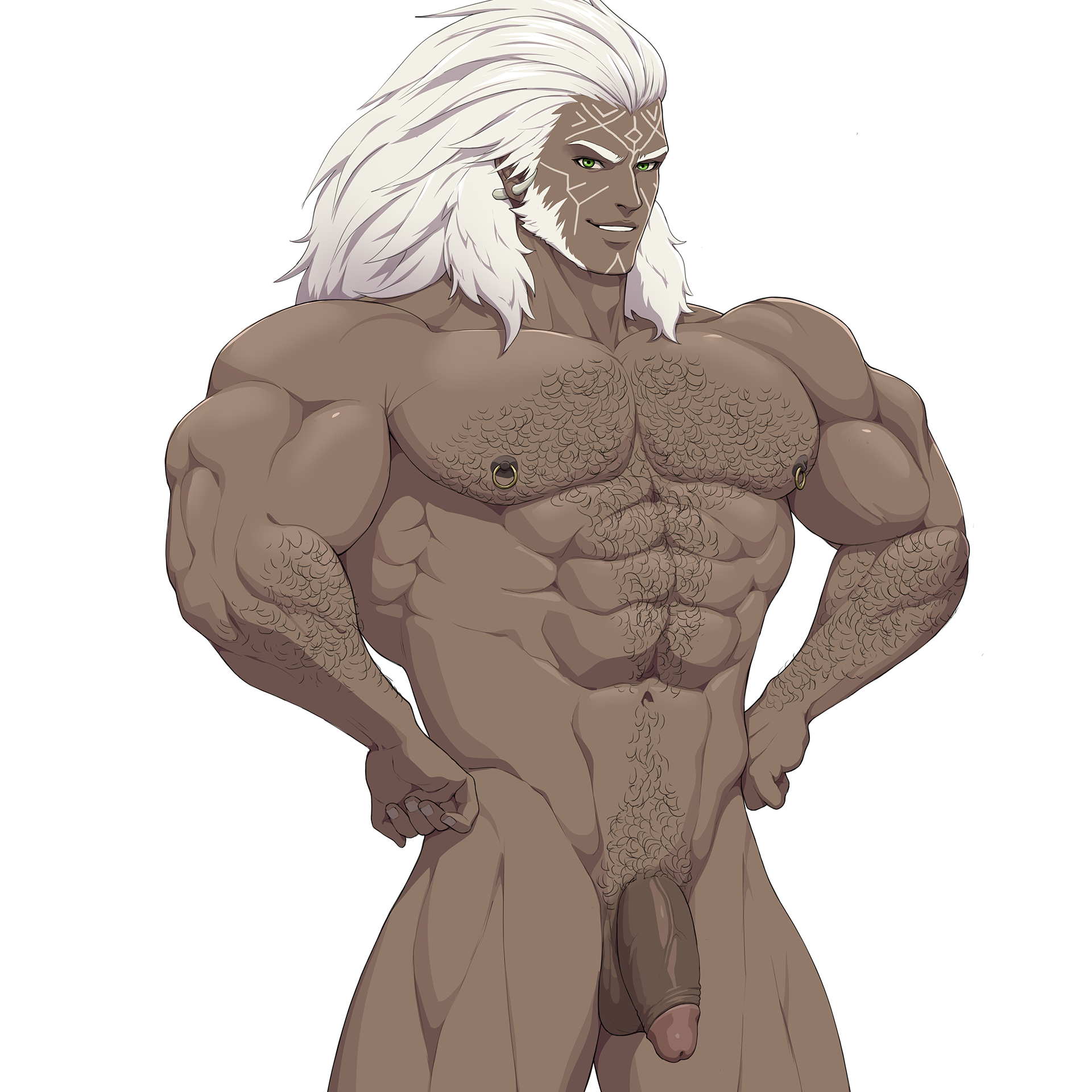 Yeah, definitely. However, android port takes longer to create, so I'll make it when the game is more stable.

Can you try using keyboard to move around? (Use the navigation arrow keys to move around and ENTER button to collect items). The only way to return to town is by moving to the edge of the town right now, but I might add clickable town map button for faster navigating.

I might also reduce the slimes difficulty a bit, since it is a newbie forest area, after all. But yeah, difficulty stuff hasn't really been properly tested  so feedback is appreciated! (not properly tested because while I was testing, it wasn't really in proper game flow aka I was probably using several cheats to quickly playthrough just to ensure no significant errors 😅)

Tough board is a crafted item, I believe. It's been a while and I have no access to laptop right now so I forgot the way to get the recipe.  Black dye is also crafted item (recipe is obtained from doing quests for the spider twins, if I remember correct, with raw materials of black colored grasses you can collect in spooky forest)

Hi there, no worries! I might tweak the amount of blue jello to 5 or 10, then? As for difficulty in battle, the best way to quickly get stronger is by doing Haves's quest so that you are able to buy various strengthening potions (can buy ATK/DEF/HP/MP increase potion, which is a lot more significant than charm skills). I feel like I need to tweak the escape rate so that it doesn't succeed too often (right now it's like 99% success rate) which makes fetching / gathering quests a bit too easy since you can currently escape all the time. I'll release these planned tweaks when I'm also done with Finn's route!

Yes, of course 😄 You will get access to full version game when it is finally released too.

Thanks for explaining it so well! This is basically the reason. Also, I initially didn't expect each route of Banana Ranch to be this long (I wanted it to be shorter than Seiyuu Danshi's route, but it ended up being much longer instead 😅). The CG count for each route is bigger too (SD has around 14-15 CGs per route iirc while BR has more than 20), which causes the artist's workload to be bigger too.

For a small dev, it is actually *very* common to work on multiple projects at once. Even during SD development, I had asked the artists to start drawing for other games when they no longer had task to do for SD, I just didn't announce it back then (and those games unfortunately ended up not getting continued). For Baradise Escape, I'm fortunate enough to get the artist currently working full time for me, so I keep commissioning them for new art now (at a scary rate for like ~15CGs per month) . Unfortunately, art costs money so I have to quickly finish the Baradise Escape demo to gather funds for further commissioning (otherwise, I'll just keep the project a secret project like I usually do lol, because people tend to assume the worst  😅)

Baradise and Banana have different artists, and I still keep commissioning art for Banana Ranch CGs as well (unfortunately at a slower pace due to artist not working full time). It's not like I can ask Baradise's artist to work on Banana Ranch's CGs, their art style is totally different 😅

Anyway, my current plan right now is: Work full time on Baradise Escape demo until 17th March, and hopefully by then Finn's CGs are mostly completed, and I will then switch gears to work full time on releasing Finn's route, then switch back and forth between the two projects like that. If the CG production for Banana Ranch takes too long, I might try hiring additional CG artist (though it can be hard finding reliable artists that are willing to draw 18+ and match art style ^^;)

The artists for Banana Ranch and Baradise Escape are different. For Banana Ranch, my only workload from now on is writing the scenes then coding in the CGs once they're done. I'm in the phase of waiting for the CGs to be completed (for Finn's route), so rather than idling around while waiting for the CGs to be completed, it is much better for me to work on another game. It is in fact very common for a small developer to work on multiple projects at once. Yes, sometimes more than two at once. Yes, sometimes those projects end up being scrapped before the public knows their existence to begin with.

Each route has more than 20 unique CGs (not including variants), which takes a long time to draw. I don't want to cut corners for any route, so it will understandably take time to finish. Making game takes a long time. If you have pre-ordered the game and do not want to wait, feel free to request refund. I'll happily process them.

For Baradise, probably yes, but it will be put on Steam at least 1-2 years after the game release. For Banana Ranch, probably not since there are several shota characters and Steam most likely wouldn't allow the game.

Glad to hear that! 😄

There isn't any download for this game because it's pretty early in development. Demo is planned to release on 17th March for now!

Unfortunately, there isn't any way to have sex with Gods in the beta, I'll definitely keep that suggestion in mind though (bcs they're indeed hot! 😆)

There's a lot of suggestion about this, so we indeed have a plan to add another twink merman as possible love interests (since we need an NPC for underwater area anyway, let's make it a cute twink 😝)

Yes, max facility level is 3. You are able to make 4 star ingot, the star is calculated by the average star rating of raw materials (so if you use higher materials, you can bring the star up to 4)

It's only the demo version release date! We've got a planned date now, though: 17th March 2022!

Fingers crossed his route can be achieved! Since the campaign is done through itch.io, I can do an extended period of funding (for Banana Ranch, it was extended to 6 months) which hopefully allows more time for the stretch goals to be achieved!

Most of the gameplay elements are things that I've implemented for Banana Ranch, so the additional challenge here is in making nice RPG maps to explore and survival aspects! It's definitely an ambitious project, but so is my other games. I want to push myself to break my own limits & continuously improve with each game 😊

Anyway, production time is definitely around 2 years until actual completion (judging by how long it usually takes for me to finish my games...). Though, I update almost daily on Twitter (twitter.com/meyaoigames) with game updates so hopefully that can ease up the anxiety for the long wait. Making games is just so time-consuming no matter how long I've done this for 😅

Aye, planning for one with cute curly hair! 😄