are there any other skips you found that we don't know about yet?

I originally typed out an explanation, but then I got wr so I'll just show the video here: 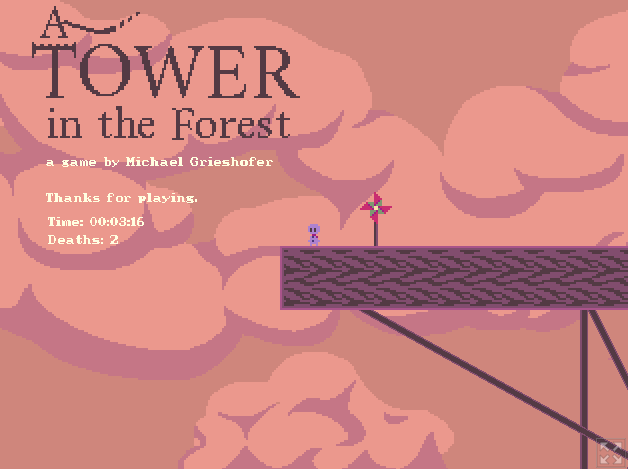 I just found a HUUGE skip!

I knew about all of these except for the triple jump, which I'll look into since I can get it somewhat consistent. I don't think that any of these are what the developer used though, since they are so hard. After playing through the game again I didn't find any new skips, but I'll keep trying to find them

Also, should we set up a discord for this game? I don't want to clutter the comments of this game with speedrun talk.

I don't think it would be unfair at all. I'd like a hint if you won't tell

Which skips didn't we find? Also GG on the sub-4!

If I decide to improve this I might try and get the game on speedrun.com

I got 3:35, which is world record as far as I know. It's a really sloppy run with a couple deaths, but it's good enough considering this only took ~20 attempts.

I think I'm the first person to find the secret room? I'm honestly not sure since I got it on my first playthrough and it honestly wasn't that hard to find. I don't know how to mark something as a spoiler so I'm going to put the image of the room in the reply to this comment.

Press x to open the menu, the go to reset and delete your save. Then, while on the title screen, reset the cart by pressing enter and then scrolling to reset. That will spawn the starter monster

actually, several people did runs on the old version of the game. Both myself and susuwi got times under 16 seconds

I spent about an hour in the game and found a few cool things/secrets. I don't know if the game has a proper ending other than the taking a nap thing, but here is what I found: (spoilers ahead)

There is a white gate in the first room. I don't know if it can be opened.

The white dog in the next part of the park has a bone. If you dig a hole, you can put the bone in the hole, and the dog will wag her tail.

There are two parts of the map that have an X on them instead of the normal dots. Digging here reveals two colored pixels. It might be some sort of nut? It's hard to tell. If you fill the hole in again, the nut stays on top. There are two places where there are X. I tried pushing the squirrel onto the nut. Nothing happened.

Behind one of the grass patches, there is some sort of meat. Probably chicken. When you eat it, you get a bone. This bone can be given to the big dog, which allows you to go through and get the game's ending. When you finish the meat on the bone, a black squiggle spawns. I don't know what it is supposed to be. You can push it around.

There is a duck who can follow you around. He will follow you anywhere until you change direction. Then you have to get him to follow you again. I found a way to use him with the two balls in the park. The balls normally keep going until they hit a wall. But they also stop when they hit the duck. By strategically moving the duck, I can get the balls to any place on the map. I'm not sure if I can do anything with this though.

This was a really fun game to play! It was interesting to play a puzzlescript game that required some skill elements, like timing moving around the energy loops. I'm sad that this was so short, because I believe that it could be a really great game if you made it longer.

I know you asked this five months ago, but there is actually a  discord server for this game where you can share level times or full game times. Here is the link.

after analyzing it frame by frame, you can save 2 frames on the pink kill, 2 on the black kill, and 2 on the blue kill. the best possible time is a 15.73, but youd have to be insane to go for that

sadly, speedrun.com rules state that they dont accept short or trivial games unless otherwise notable. a 15-16 second speedrun with 4 runners isnt gonna cut it. I had a similar situation happen with another game i ran, where the game got rejected because it was too short. its on the site now, because of an update to the game which made it longer, but unless this game gets a lot more content, it wont happen.

there is? im dumb lmao

since everyone is writing their times here, here is my record for fastest win. I got this about 35 minutes before susuwi's 15.93. As far as I know, it is the first ever sub 16 second run.