Right now, the only way I'm aware of translating the game directly is by editing the text within the RPGMaker XP engine itself.

If you're willing to take the time to use a video editor instead, that would also be fine by me!

Thank you very much!  My initial nexus design was very sparse (literally just a black void h-haha) so I wanted to make it look nice.  I also had a lot of fun making that area.

It's very helpful, thank you!  I do the same, which is probably why I add so much unnecessary flavor text.  I inspect every object, so I will make all of mine say things...!

Thank you so very much!  I'm not the strongest writer so it means a lot when people say they enjoy my dialogue and stuff.

Hi there, thank you so much for the bug reports!  Placing them here is perfectly fine by me, since it's easy to access and also others can see what's been reported or not!

The first one must be some form of passability error, where I turned the player's THROUGH on and forgot to turn it off... I'll scour those maps and see if I can find exactly which event caused it!  It probably is the one at the large gap, but I'll make sure something before then isn't messing with it either...!

As for the second, I think I was just a fool and forgot to select the move route for the stool to not happen if it can't actually be moved (like being pushed against a wall or another event).

Thank you for letting me know about these, I'll try to patch them up as soon as possible!

I am a simple person.  I see a new Sai game, I mash that mf download button.

Sorry for the delay in getting back, but I've sent you the file!  Thank you again.

It has!  I apologize for my slowness, I'm assembling the files and uploading it now.

That makes things much easier!  Please e-mail me at meakarts@gmail.com so I can pass along the necessary files!

Thank you very much, I'm glad you enjoyed the game!  I would be honored to see a Spanish translation.   Do you have the RPGMaker XP engine?

Queenie [b]ls I'm begging you, open up tipping so I can pay you for these sick jams.

Ah, thank you very much!  To be honest programming and coding was primarily handled by the RPGMaker engine itself, but I hope it worked well regardless!

THANK YOU!!!!  Especially thank you for testing!

asldfjlkasjdf THANK YOU!!!!  I'm probably in a bit of a game lull for a bit, but I hope this one will hold people over while I come up with more!

YOU ARE, IN FACT, NOT!  H-haha that's my debug room, I accidentally left the start point there after testing... I'm uploading a fixed version now! 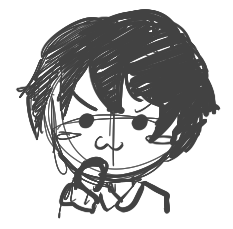 I gotta be everywhere for them sweet, sweet promos.

WELL I THINK THEY'RE CHARMING!!!!

YES I'VE BEEN WAITING FOR THIS.
I literally laughed out loud at some of your flavor text.

Small nit-picky thing:   I got so lost and so confused by the graveyard map.  It's a very large maze and there's no real "landmarks" and also some of the passability is weird (like Noël can fit behind some gravestones but not others of the exact same size).  Even just tiny things to make it less the same would help...!

Overall though I'm in Love.  Your art has improved so much and your writing is so mysterious and cryptic, I'm (eyes emoji) to learn more about the story.