Haha, no worries, no horror game, I'm going in a different direction with those. That's why I decided to let it as vague as possible in the game page, I guess surprise is a big part of that stuff.

I have some stuff already planned, but could't quite make it work in time for the Jam. I'm so glad you liked it! The OST of your entry is really nice, I'm already downloading it to check it out!

Hey, this seems pretty interesting. I'll be sure to give it a try once you upload the demo!

My project is a game called "Wally", and it's developed in Unity Engine for Windows only, and it's an idea that is on my head for more than 6 months, This limitation is due to some kinda complex stuff it does and libraries it uses, stuff that only works on Windows for now. It's a point and click game where you help Wally, a little.. thing... to do a list of tasks of his, and at the same time chat and learn more of his personality and his world. But there's much more to it, and I really hope you join me and Wally in this journey. (By the way, the game is only windowed, and there are reasons for it.) 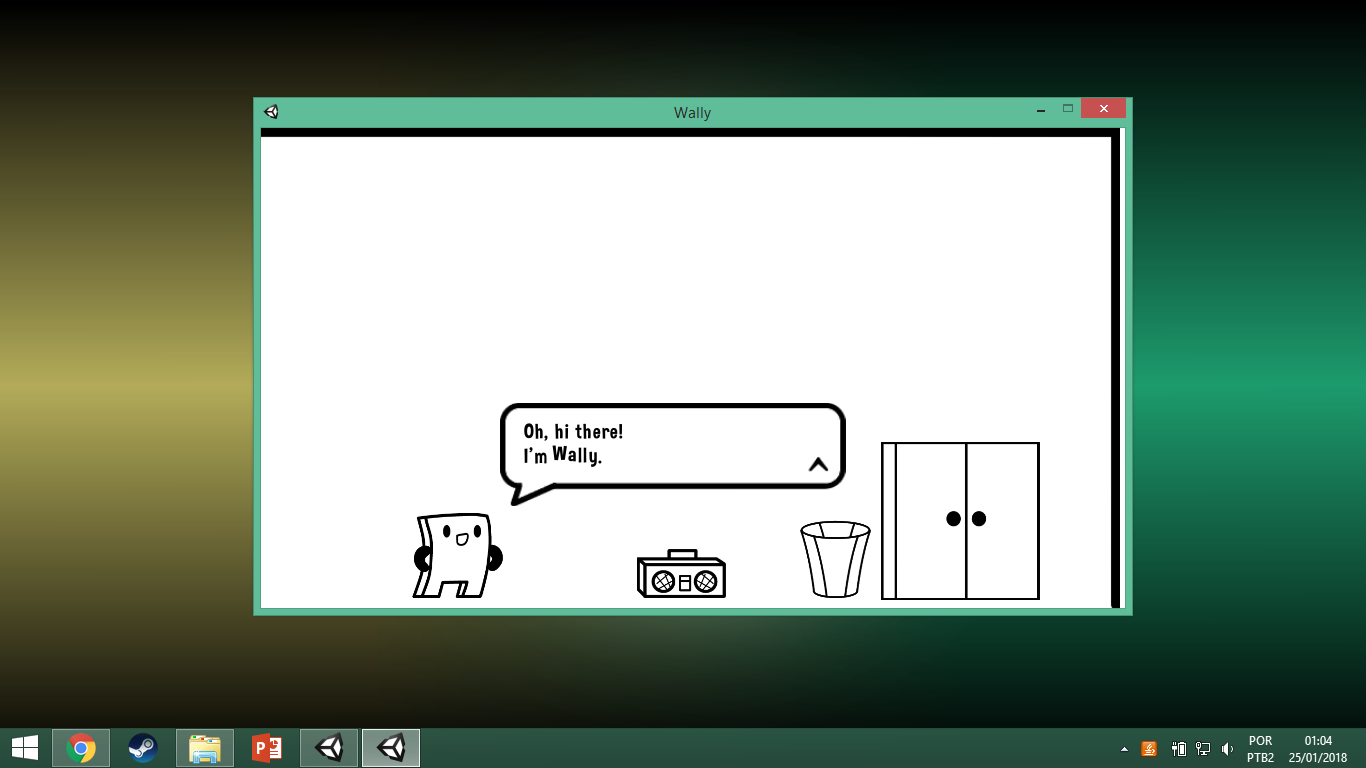 This paragraph will detail more about the game, but it will be kinda spoilerish, and I'd like for you to go in as blind as you could, but hey, if you're that much curious here goes. Otherwise I'd advise you to skip it. The game's primary concept is influenced by games like Undertale, OneShot and Doki Doki Literature Club, and it focuses heavily on making you feel that it is more than just a game. It will ask you to do stuff outside of it and I want to make Wally feel real, and for you to care about him. I've come up with a few ways to "break the wall", and I hope you find them interesting. And due to this nature, there's much more to this little game than it seems. Fun fact: the original name of the project was "Wally Breaks the Wall", but I thought the title was giving away too much.

I started working on this game project as soon as I learned about the jam, kinda 2 weeks prior to it's beggining. I'm FINALLY studying Unity, which was the main point of this: learning other Game Engines, since previously I've worked only with Game Maker Studio, which I used to make my college graduation project.
Since I started this without knowing nothing about Unity,and I still have some college stuff to sort (I graduated last month, YEY), so I don't think I'll be able to finish the game till the end of January, so I'm glad prototypes and demos are allowed. I want this to have a big scope and include some things that I really need to study yet, as well as improve a little on the graphics side. The art style is still black and white, simple drawing-like, but I want to refine that.

I plan to finish a few in game "tasks", around 4, for the demo and have some extra stuff ready for it. The 2 introductory ones are ready, the last one is almost ther, so I need to start the third and finish the background and some functions. I guess it's enough time to come with all that up and do some testing before uploading. (The extra post January days will be wonderful for that).

Last but not least, thanks a lot for creating this Jam. It was the push I needed to start going in the right direction and improving bot my programming and game dev skills. I mean, for the first time I even made a song that I like and think is kinda catchy!

Anyway, see you in a few days with the demo!

Thanks a lot, I did knew it was just that easy! You don't imagine the pain it is to do that on other game engines XD

I love those good old shooters! Excited to try it out :)

Really cool and nice little game! I like the style, and I figured the OST was made with BeepBox :)

I'm curious with one thing, tho: how did you implement the wavy and colorful text effects? Drawing each letter as individual objects? Just curious if you're using a different method.

Looks really interesting, Il'l be sure to give it a try once it's done!