Dungeon Throne is a rogue-lite platformer in which you explore dungeons kill their guardians and reclaim the throne.
As you explore the dungeons, you get to help prisoners and find artefacts.

The game is meant to be replayable featuring 40 different artefacts (many of which you'll have to unlock playing), 11 unique spells, 100 room layouts and thousands of dungeon layouts.

Hello everyone, a week has passed and I've got news!

In the previous Devlog I didn't show the menu between each run, this menu would allow you to spend gold on upgrading your artifacts, and to consume the essence of the enemies to unlock new powers and passives. 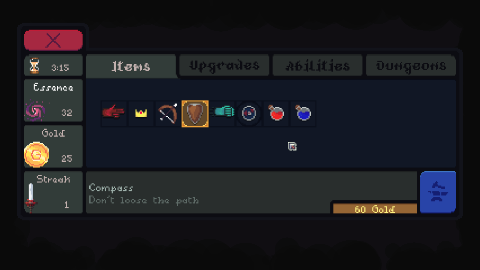 Items menu with one artifact upgraded 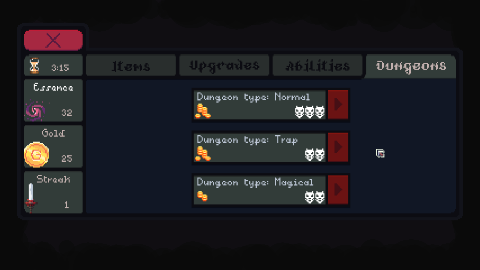 As you can see there's 3 Dungeon Types:

Each one with its own rooms, textures and enemies.

There's also 3 levels of difficulty represented by the skulls and 5 levels of rewards. 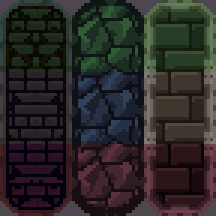 The 3 textures for every dungeon type

I've added a few more spells but can't seem to upload the video directly without  so I'll rely on you guys checking those in Twitter.

Welcome to the very first devlog of Dungeon Throne

This is a game I started making a few years ago, back at the time I wasn´t nearly as skilled making games as I'm now and definitely didn't know how much it would improve.

Since the game has been in development for a very long time but this is it's first devlog, let me tell you what it is about.

Story - What's the game about?

You're a wizard from a world that hasnt had wars for decades, it's a peaceful era. Suddenly dungeons start appearing all over the world and monsters come out from these, destroying everything they see. The kingdom you belong to was destroyed by these creatures and some people including you were taken as prisoners. You must get more powerful by obtaining artifacts inside each dungeon, save the prisoners, and destroy the dungeons you explore by killing their guardian (each dungeon has a guardian, who's the one that controls the dungeon).

"So that was quite an interesting story, but I wanna see some gameplay"

Yeah sure luckily I've prepared a video for this, it ain't much but it shows part of the combat from the game. There are items and I've alredy added a boss to fight but I'll show those once I tweaked some things since they're not ready to be shown publicly yet.

Now on to the video:

I expect the game to be released in about 2 - 3 months, it might be available first on itch.io through its refinery system.

It will be available in: Itch.io, Gamejolt and Steam for Pc Windows (although I might add support for Linux if I can).

If you've readen this far I want to thank you for your time, and for giving this devlog a chance. I'll try to update it as frequently as possible but if you want even more updates you can check my Twitter.

Thanks again and have a good week :D

Could you give licensing info?

Would i be able to modify it to fit the lightning in my game?