TITAN HUNT is out! 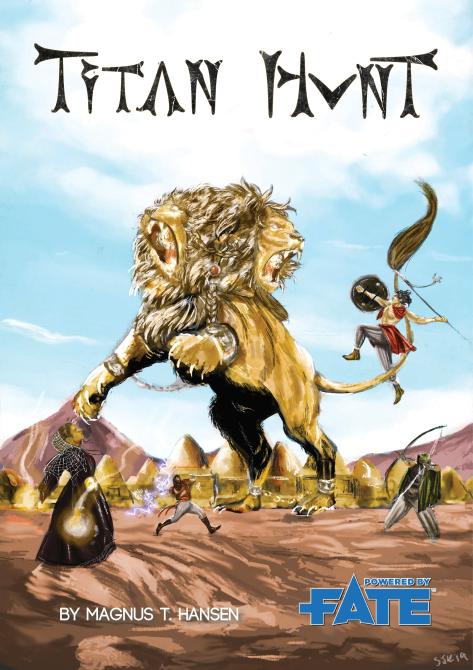 Titan Hunt is a short, Fate-based game about hunters from small, scattered communities hunting enormous titans that stride the earth. The game requires Fate Core to play, and is similar in scope to the official Fate Worlds, which inspired me.

The game focuses not only on the hunters and the titans, but on the communities they come from, the villages and hidden towns they must protect. Your friends and family goes hungry and an ice-eyed sphinx threatens to crush your small desert village. Gather up your allies, take your spear, and bring it low. Only with the spoils of the hunt can your people prosper, and only by crafting great weapons from its skin and bone can you hope to bring down even greater beasts.

You play titan hunters, brave heroes who climb the titans and defeat them in combat, protecting your communities at great risk to your life, forging great weapons from the bones of your vanquished foes, and providing for the needs of your community with their meat and skin.

The world of Titan Hunt is a broken thing, ruined and imperfect. Broad, rune-lined roads cross desolate mountains only to be swallowed by the jungle; once-floating cities lie bleached and waterlogged against the beach; great cathedrals have been buried by sand, but still show long-dead gods; broken walls rise like jagged teeth from the tundra and the swamp alike. Everywhere, the ruins of once great civilization dot the landscape, made alien and strange by once-controlled magic turned to chaos.

All that remains of humanity is tiny enclaves, villages and hidden towns. People struggle and fight, scrape by and hang on by a thread. They live in the shadows of great titans, in fear of great things swooping down from the sky or burrowing from below to crush all they know.  But they do live, and fight, and they will rebuild.

The game focuses just as much on these communities your hunters come from as on the hunters themselves. The community your hunters protect and nourish is its own character, and also aids and shapes its hunters, providing them with help, advice and a place to return to. Each adventure is shaped by how the community helps for that adventure, and each hunter is defined not simply by their magic, skills and equipment, but by the community they grew up in and their role in it. The communities, in turn, are shaped by the Titans the hunters bring home, built from their bones. Villagers feed on their flesh, and use their bones and hides for weapons, armor, clothes and more.

This is all done by the new Community subsystem, with communities as characters with aspects and stress, characters that place aspects on your hunters in the beginning of every adventure, as well as informing the characters character aspects. They take stress to help their heroes so, however, and must be constantly supplied in turn for them to continue to function, not to mention prosper and grow.

And the hunters need their community to fight the great monsters they hunt. These are massive titans striding across the land. The smallest of them are the size of large houses; the largest of them are the landscape and the weather. They include fire-breathing dragons, great wolves with clockwork hearts and freezing eyes, and many-headed chimeras whispering to you in the voices of the dead.

Because of their size and sheer scale, these cannot simply be fought normally, but are instead divided into multiple rounds; first, they must be brought to heel so the hunters can climb onto them. This is the capture phase, during which the great beast changes the environment, and must be restrained. Then the fight begins in earnest, as the heroes climb onto its multi-zone body and attempt to exploit its weaknesses to disable its limbs and special attacks and abilities until finally it falls. Then the carcass can be quartered and used, both for its bulk of meat, skin and fur, and for more exotic parts, such as fire-glands, crystal eyes, and ticking mechanical hearts.

Equipment While the bulk of the great monsters are turned over to the Communities, to aid and improve them, other parts are made into great titan-slaying weapons and other fantastical equipment. These are cloaks of thunderbird feathers that allow you to soar, unbreakable golden nets, or acid-resistant shields of manticore leather. The core of the titans are made into permanent pieces of equipment, stunts unique to each character and which change aspect as parts are replaced.

Other bits are made into less permanent equipment; brewed into strange potions, made into javelins of lightning, or armor to repel dragon's fire. This is done with a heavily modified version of the Invention subsystem, making your conquered enemies into short-lived or single-use stunts.

An excellent game - a tiny island, but a place i'd love to stay!

Just call it a demo goddamn.