My base got reset!!!

I checked the map, nothing else is reset, I have all my gear and all the resources I've collected. Too bad I don't have enough storage to keep it all. 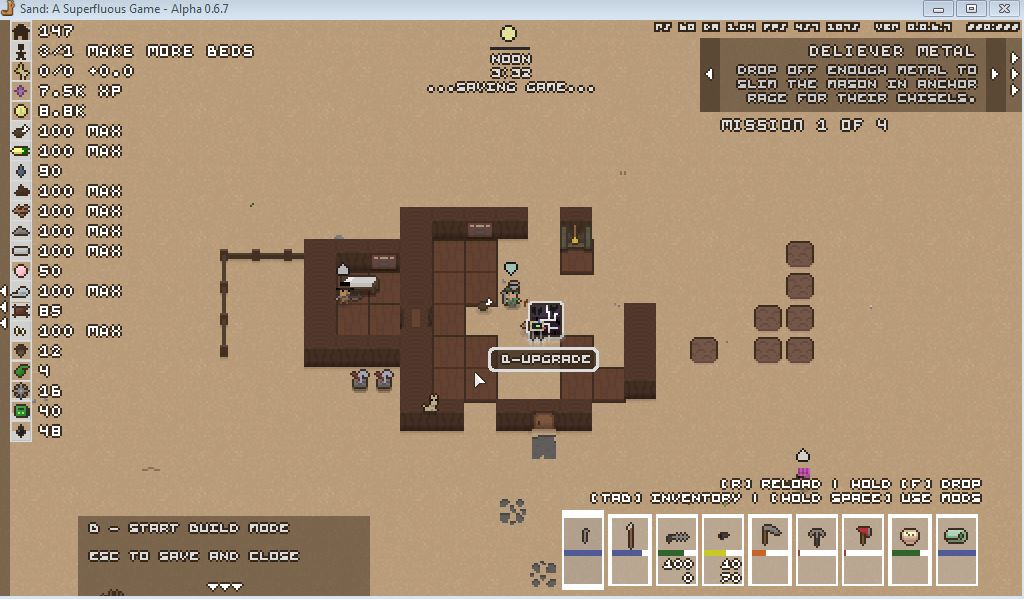 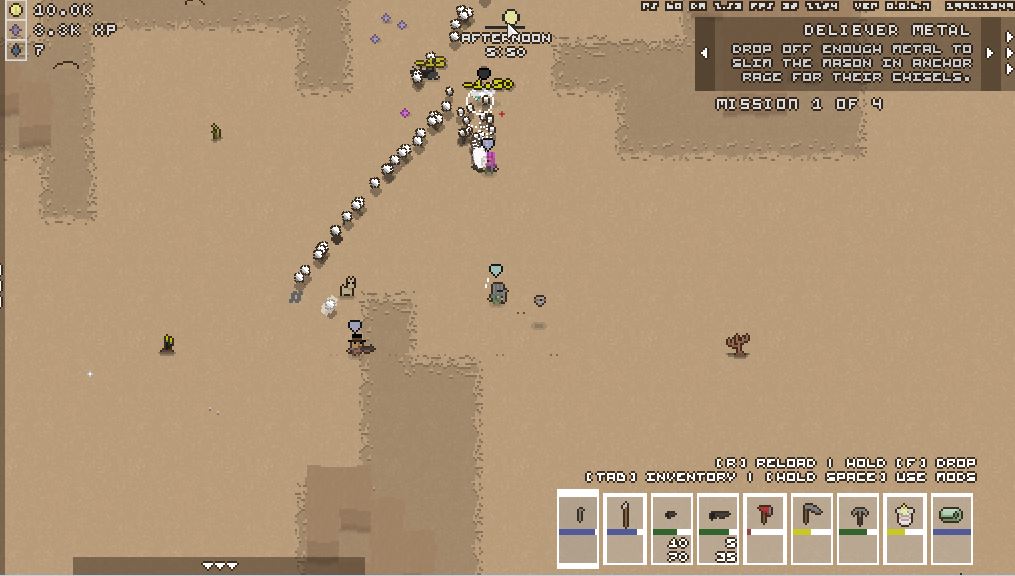 Hey, would you do the same with the Llamas? (I know there r cheap to build, but I don't know, guess I got attached those little woolly spit machines more than I though & I'd rather not make em if I'm just going to loose them). Just my view of the thing though.

P.s - would it be too crazy if Ripley wielded a FLAMETHROWER!!!

My question is, will the same thing happen to my car??? It's expensive (as you know) & I rather not loose it.

When you close the gate while you are standing in the middle of it, you get stuck in the fence.

Encountered this a while back & didn't want to mention it coz its easily fixed by restarting the game & re-spawning. [I guess I was on the fence with this one! (stupid pun intended :-D)].

Saddles???? (for Llamas and other potentially rideable animals ) - more of a kind request than a suggestion :-)

Please Note - English isn't my native tongue, so pardon my writing :-D (I'll try to make as much sense as I can)

In my opinion, it would effectively make it more clear to seen how many items the play have harvested/mined/collected.

like the (poorly) edited example shows, "+/-", "number of items" and "item name" can be made to appear next to the corresponding item.

I'm suggesting this because whenever I harvest corn from my farm, numbers of collected items are shown like this, 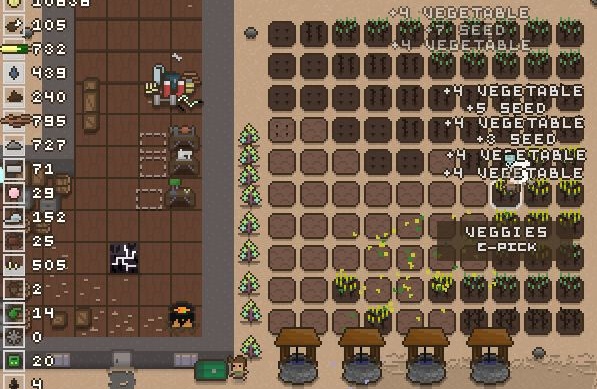 I love your game and no offence, but I crunch  numbers for a living & I rather not do it in my free time as well :-D. With that been said this is my view only and I don't know everyone playing the game would agree.

Plus, veggie stacks are still bugged

What do you do with experience points? (so far I have 14K+ but I've no idea on what to do with them)

So a small and kind of irritating issue,

So, I've the trade system right now is unique but basic (you put thing up for sale/buy & people come & trade).

But what if a once in a while a trader would come to the based & say something like "I got robbed on my way here, be a lamb and destroy those raiders & I'll reward you!"???

Or traders could sometimes (for a price!) tell the player where to find a particular weapon/upgrade/resource cache (assuming those will be put in the game)?

I think both of these kinds of quests can compel the players to do more exploring/fighting thus adding to total game play hours.

As per a suggestion by me (Dev approved :-) ), this thread's created for any missions/stories suggestions/improvement ideas you would like to be put in the game as side quests.... So, tell away!!!

Being a HUGE fan of the Fallout series myself, I understand why you would want to model your game after the first two. In my opinion, Fallout 1 has the best main quest in the whole series. But in my experience, every Fallout game focuses on being very serious and dark and it mainly focuses on the player having to make hard and conscience decisions that affects the very morality of the player. In my opinion, what makes your game stand out (if someone were to compare) is the humor offered by the world and its characters. Especially characters like E.D.D.I.E. or the Mayor who makes do with what they have instead of feeling all sad and grim about the state of the world. Currently, with the game as it is, is feels similar to "Adventure Time" (LOVE THAT!)

Few more things I forgot to add last time (will be brief this time),

-Multi story buildings (because why not? you cold also add roofs too)

-Travel encounters (be it a simple gang of raiders that happens to cross your path or more interesting encounters like a a blooming tree in the middle of the desert that catches your eye and when you try to cut it down, it turns out to be a big camouflaged mutant!!)

-Terrain buffs (like when you are in travel mode, there would be random events that'll course the player to loos/gain supplies - this could be done in the same way text-based quests work).

-Gore (I don't generally encourage this, but it seem s that this can use a little a bit of red and if done right, this can help to humanize enemy NPCs and add to the grim factor).

- What are Ink people (Aliens???) & are they fluid or solid creatures?

" thread where people can make stories" I'll do that (hopeful that everyone would be interested to have their stories told)!!

First I gotta say I found this game to be funny with potential to become deep and grim all at the same time. I love those kinds of games!!!

Hope to see more of the story line real soon!

Got some suggestions which I think could be great for the game (Chances are most of these already have been suggested before) I'll try to be brief (no promises :-D),

- Biome weather -  Two thing I've noticed about the game's biome. It's a desert and it's a post apocalyptic wasteland. So in line with that, you could add rain/thunderstorms/dust bowls/sand storms/heat waves/cold waves etc. I think it would add more depth to the game and you can make weather events give buffs/penalties to the player's town (E.g. - regular rain can water crops and you could add rain collectors as a buildable object while acid/radioactive rain can delay or kill plants and stuff same as that, electrical storms can give more power if a lightning rod power generator kind of thing can be built and dust bowls/sand storms could just get sand everywhere in the base).

- Enemy Mobs - MOAR!!!! to be specific, you could add bosses/semi bosses (just a little bigger and little harder to kill than your average raider). Also, you could give raiders vehicles/beasts (like big lizards or those black roach things) for them to ride on. Assuming you do give them vehicles you could make MAKESHIFT ARMOR/GUNS/CANNONS/TURRETS/SPIKES/CATAPULTS and all manor of wasteland things attachable to them. Also you could give them in the vehicle station as player vehicle upgrades.

- Enemy Mobs (wasteland beasts) - MOAR!!! again, to be specific, you could add more creatures that are typical for a wasteland desert biome (I.e. - giant Lizzards/giant Scorpions/Feral dogs/giant Armadillo-Ankylosaurus hybrid kind of things would make great hostile mobs plus there are actual things in deserts called Deathstalker scorpions and Thorny Devil).

- Faction Cities/HQs - you could have small Towns / HQs for both raider factions apart from isolated camps (assuming this is a direction you'd want to take).

Let me know if any of these are worth putting in the game. Plus I am good at story writing and stuff so.... could help with stories for side-quests & stuff if you need Pro bono! (I absolutely love this game!!).