BloodbornePSX community · Replied to ArionaAllant in Inquiry for the better educated among us.
Merlyn Morgan-Graham105 days ago (2 edits)

I apologize for any lack of clarity on my part. I was not asking for them to change how they’re doing things. I think it’s great how it is!

I was replying specifically to the “That’s why it’s a self contained application.” part. Maybe a bit confusingly, and pedantically on my part. Was just trying to say this isn’t strictly a requirement, nor a smoking gun. It being stand-alone is a hint that it’s actually a PC game w/ masquerading graphics (and I am well aware that this game is that, and was before I even came to the page). Just that it’s technically possible to skin an emulator so it looks like you’re running a single game natively.

But as you said, that would have required them to have actually made a PSX game to begin with. Which they didn’t. They made a PC game that just looks like a PSX game. It is in no way compatible. Totally get that on my end.

Reply
BloodbornePSX community · Replied to ArionaAllant in Inquiry for the better educated among us.
Merlyn Morgan-Graham106 days ago

they could have built a rom and stuffed it in a stand-alone emulator. they just didn’t

Reply
BloodbornePSX community · Posted in You'd have to pay me to play this.
Merlyn Morgan-Graham106 days ago (1 edit)

As for the rest of your opinion: Git gud. Scrub.

I have a 144hz monitor and the game runs way too fast. So do the other games linked have similar problems.

I suspect some of the people complaining about it being “impossible” might be running into the same problem but not realizing this is the issue.

maybe that was on an old version of the demo? it was a long while back that I made my post.

I think I read on Twitter that the dev is sick right now, but I suspect he'll reply after he gets better.

Was gonna grab the game here or on HB. Guess I'll get it on Steam instead! :)

(steam keys would be nice, but I'd rather just buy on here period)

thanks for making me a wizard!

Stuck at the spirit woods...

I'm pretty sure it's either not working at all, is at least a 6 arrow combo, or is a 5 arrow combo that doesn't end in right. Don't ask me how I know, lol.

Options menu, and Map menu does nothing at the moment.

Bug: In the screen just right of town, at night, I fought a skeleton, a bone got thrown at me. I lost the last of my HP during that hit. I clipped somehow through the ground (diagonally hit a corner?), fell through the terrain, then fell forever. The screen then kept scrolling right to the far edge, and stopped at the scroll-to-next-area boundary.

Got a soft lock, and could not activate the UI at all to try to reset myself, had to escape out of the game. 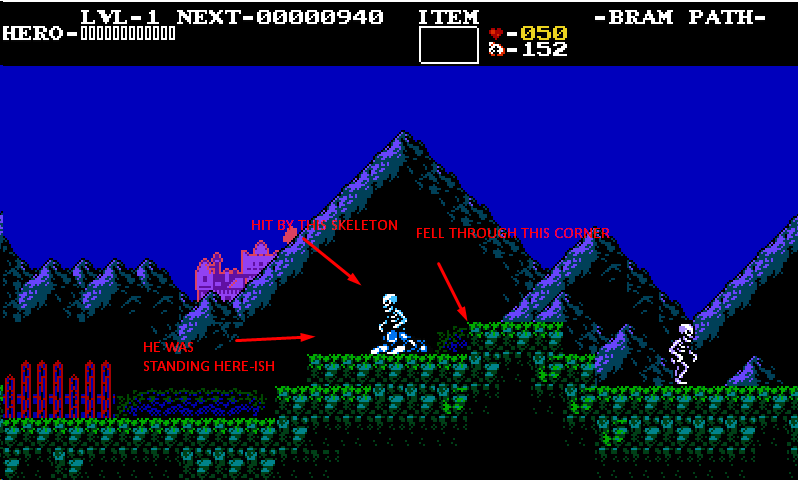 The specific control I was suppose to press to activate the statue wasn't obvious to me, nor was the hitbox. It wouldn't be NES-authentic, but it might be useful to have a "press <xyz>" prompt on some of these things.