Thanks for playing!  We appreciate your feedback and are glad you liked the voice acting!  We are trying to mimic a style of jousting where you aim to hit each others shields and not the rider, which causes some confusion at times.  The spinning icon in the top right if you wait for it to stop spinning and change colour it indicates which direction to hit on the keyboard to cause your shield to move.  As you saw, the keyboard controls are a little clunky - the game was designed from the ground up to use XBox controllers for input, and very basic keyboard functionality was only added after development was complete.

Reply
itch.io Community » General » Release Announcements · Created a new topic Joustaposition! A First Person Stabber for you and your friends!
Joustaposition5 years ago 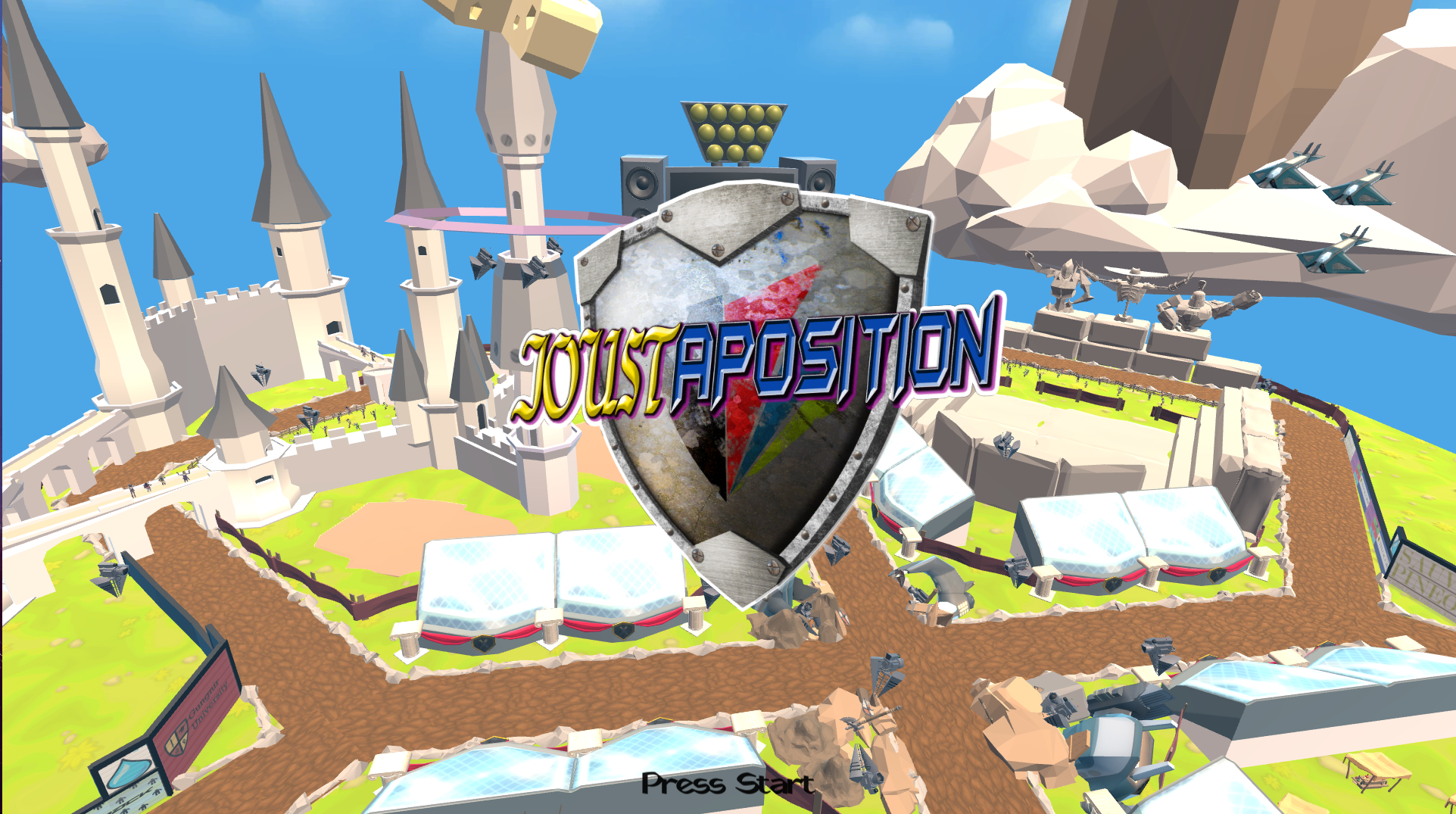 Hello Folks!  It is my great pleasure to finally get a little project my 15 peers and I have worked on for the past 8 months.  And to our great relief, after showing it off at a few playtests, and at Level 2017 in Toronto Canada, people seem to be genuinely enjoying it.  So here we are on itch!  We are giving the project away for free for people to player with their friends, family, and sworn enemies.  More information direct information can be found about the game below!  If you have any particular questions you would like to ask about the project please don't hesitate to send a message our way!

Joustaposition is a local multiplayer, fast-paced, energetic, and woefully inaccurate comedic future society’s take on the ancient art of Jousting.

- A Cast of Zany and quite Eccentric Characters

In the future, the world of sports is in decline, people are becoming disinterested with the fare, and crave something new. With the combined efforts of historians and robotics engineers, Joust is brought to the public and reaches global popularity. A historically inaccurate recreation of the classic medieval sport with robotic combatants set in an arena that sits in the sky.

When the very damaged manuscript describing jousting was unearthed, the galaxy at large took great interest in its craft and has done its best (very poor) job of recreating the age-old craft of the proving sport of knights.  Players controls one of these knightly champions as they charge on unconventional mounts through equally bizarre arenas in an attempt to defeat their opponent and be crowned the champion of the Joust.

At an overhead level, Joustaposition is a split-screen first-person game where two players ride their own mounts through a minigame where they earn points based on them completing the game successfully.  At the end of the mini-game the players enter a joust where they will attempt to hit each other’s shield to reduce their opponent's “Stability” (health) to 0 and increase their own personal score.  When the opponent’s Stability is reduced to 0, they are Vulnerable, and a single critical hit on a subsequent joust will unhorse them, leading to victory for the player.

The gameplay of Joustaposition is composed of the players controlling a lance and shield (lance controlled via the right analog stick, and shield controlled via the D-pad) while they ride on-rails atop their mounts around the arena.  From a first-person perspective the player will be aiming the lance (within a controlled margin) around the screen to make contact with targets (rings, dummies, the other player’s shield).  Additionally, the player will control the shield via the D-pad to play a number of set animations during the jousting phase to make it move.