hello, i love the game and everything you've done, i do have a question though, are there actually any scenes yet with images in the game? because i've been playing for around 30 minutes and i've just seen all black screens the whole time and the gallery still only has the same 4 images that it came with, is this intentional and (to re-say) are there any images that i have yet to find?

yo you poor soul, you probably found this out already but if this doesn't work for you still then try downloading it from steam instead, I personally know for sure it works on steam

hello, something you'll probably notice is that a lot of games have this behavior on Catalina and honestly after looking it up i was only able to find one solution for it and it worked, and the best thing here as well is it isn't even a work around, it's actually a whole solution, this amazing man found the problem and actually showed how to fix the error a lot of these apps make, and honestly here, i'll just paste it and if you have any other questions or want clarification feel free to reply and i'll help you out further (also, be sure to follow the instructions carefully),

it'll lead you (hopefully, most likely) to a folder called contents, open it (like, literally double click the folder to open it)

You'll see multiple folders now, but the only folder that matters is called "MacOS". Open it. (again, literally double click the folder to open it)

In here you should find one file (most of the time). it should have the same name as the application itself, but in some cases it's different, but whatever file this is, we'll need it later so keep this tab open and where it is

(if you knew how to open terminal, start back up here after skipping the curly bracketed stuff)   Now type "chmod +x" in the terminal window and make sure you end with a space but DO NOT HIT ENTER YET and again, make sure after pasting that in there is a space after the x, so the command should look like "chmod +x " when you have this and again, do not hit enter yet, just keep it like this

Now drag that file from earlier from the MacOS folder we were in before into the terminal and the full name will appear in the terminal behind chmod +x (please note that the system might put in some backslashes when there are spaces and odd symbols in the name. Ignore these and just know that it does this automatically and is supposed to happen).

If you see no messages extra messages and it "does nothing" in the terminal window after pressing enter then that means it worked and if you check back to the file, it has changed and now everything should work if you open the application (not the item we "fixed", i mean the actual application, so in this case probably raft)

i will include a screenshot of an example and note that most of the spaces after "Joshua" look empty, it wont look like that for you, i just took that out in the screenshot because it had my last name after my first, and also just fyi i did edit this a lot because the original poster didn't have too well of wording in some parts and i hope this helps and solves your problem (oh and i'm also noticing, the app i used as an example is a gamejolt app but honestly if you've ever used both, they literally are the same, this is a universal fix) 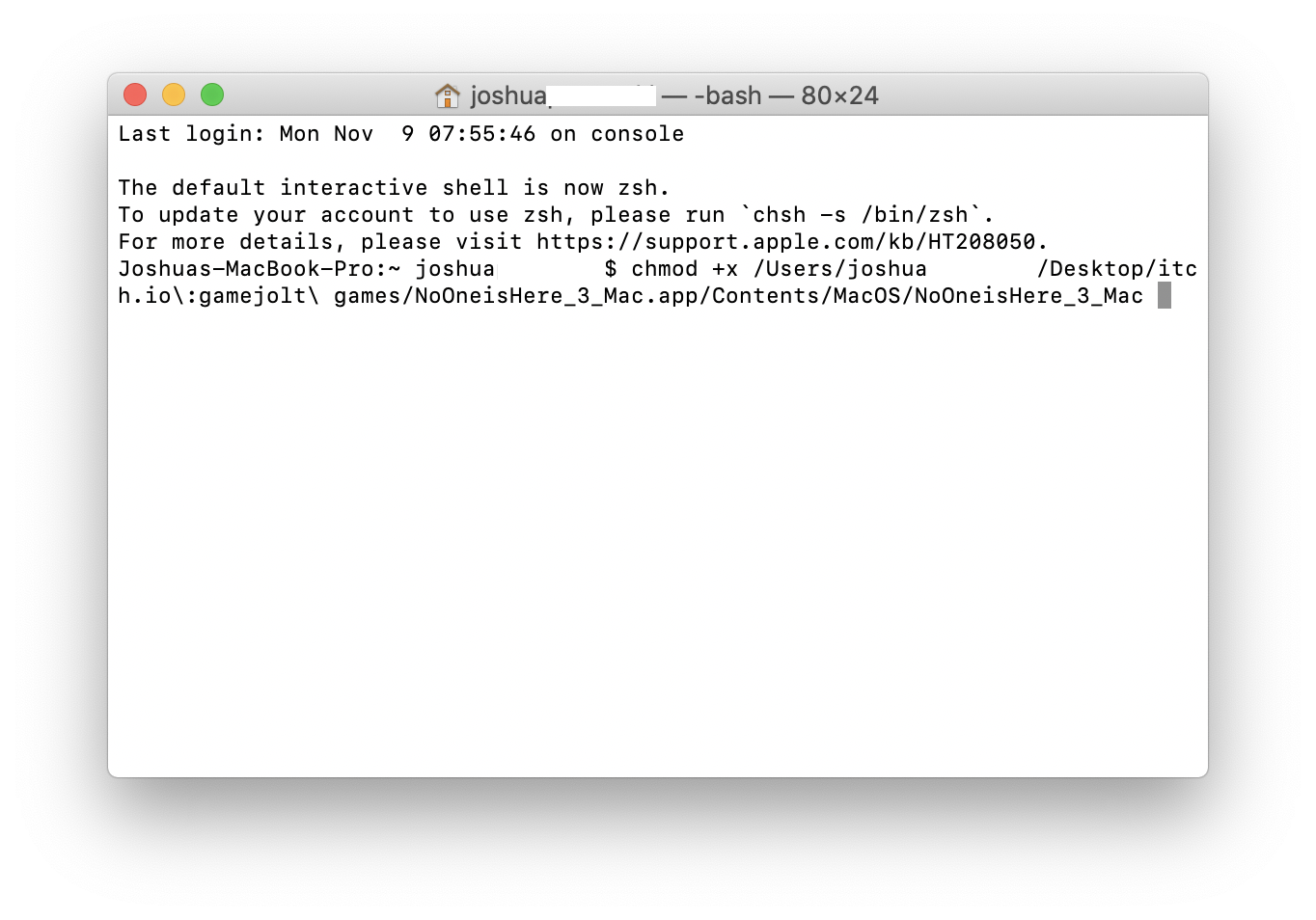 ummm, ps as of MacOS 10.15.6 (the most recent MacOS rn) when you try and open it it just says "the application "V1.04_raft_macuniversal" can't be opened" (aka it either isn't compatible, or isn't properly formatted or something) (screenshot demonstrating the folder its in on the right, the application in the right folder, and then the error)

i presume you know by now but no actually not too much of one, the one jump scare is, well, i'll put it vaguely because i can only describe it as this because its confusing, "bit by bit and after every bit it disappears and comes back" but it happens in fast succession (but not too fast), you'll see

you dont have to pay

yes, definitely, me and my friend played it together (she was in the discord call) and we enjoyed it, it was a nice, small game.