Hmmm you are right, is this something you have changed  or am I just crazy, I thought it use to give any character who had duel access to shields.

Anyway thanks for the work you do with the plugin.

Thank you for this, looks good from the quick testing I did for it.

I have a new question to ask of you, do you think it would be possible to add in a way to check if the player has access to being able to use shields or not, since if i'm not mistaken your plugin just allows,  all to use shields with or without that right?

I have made a work around for this, but thought i'd ask you see if you could add it into your own plugin to help clean things up.

Hello again, so hopefully one of my last questions on this topic, but is it easy to add into the script that if a buff doesn't have a turn count it will not display a number?

At the moment, if a buff doesn't have an auto-removal time, it will display as just 1, like the image below, which can make it confusing when, you see others that do wear off next to it, becomes hard to tell if that one will also wear off, even tho it wont.

So I've found that, the turn counter is displaying the duration in turns, even if it is set to none, which is why it will display 1 turn since thats the default for duration, which makes sense since the code is only checking the duration id.

Between when you select the skill and then it happening, which I am talking about when an Action Sequence, gets to like a point where it's around 100 lines or more, you start seeing like 1,2,3 seconds of delay past that kind of point. Even if the skill isn't dual wield, but you plugin is active it will cause this, when yours is off it has no delay even at that amount of lines, you could probably see for yourself if you copy and past just a normal attack sequence, a bunch in an action sequence and can find out if you have it also.

it isn't exactly something that causes it to become usable, just need to try more optimize them better if they are one that gets to be so long, just thought id see what you think, since base Action Sequence doesn't seem to have this happen to it.

Hello Ramza, I've been playing around with this plugin now for last few days and I've noticed that the longer a Action Sequence is, the more delay before the attack will go off.

I can't be 100% if it isn't some other plugin also clashing, but simply turning yours off, will make even a very long Action Sequence go back to no delay, even if the character does not have dual wield, if your plug is on will cause this delay.

Have you noticed or seen this at all, is there anything that can help with this, or is this just simply the nature of it, with how much it needs to do?

That looks to be the same plugin as the one in the template, called "Untitled-3", which is what makes the state counters work good, just the autopassivestates don't display at start of battle still tho.

Just the default 50, i tried with other amounts and no difference, I also tried it in the latest 1.1.3 template, incase it was something in mine, that was messing with it, but they don't appear in that either for me, so maybe there is something missing?

Like it works, its just that they wont be displayed on the Luna states setup. At least for me.

Nice! having a quick look at it and it seems to work. One thing I noticed tho, with the one you used to test it, you have 'x' + stacks, if you make one that just uses the "stacks", without any kind of symbol or word, it will not appear, tho simple fix is just '' +, leaving it blank.

I don't want to be a bother or anything, you have been a big help with making this work already, but from the looks of it, yanflys autopassivestates does not work with luna, the states only appear after actions. Idk how hard it would be to make work, or even if its just something needed to be added into the yml, but if you could look into it that would be great, if its not something you want to look into, could let me know and i'll figure out other ways to go about it.

Are you able to get like a screen shot of the code or something?

I feel like I've tried doing this and many other ways and still either I'm doing it wrong or something still not right.

Thank you for looking into this more, also I was trying a bunch of things, but how exactly do I add that into the config?

Sorry still trying to figure out how to use this.

From the looks of it, this only displays the turn counter.

What I was originally asking about was, the counters used as like variables that comes  from http://www.yanfly.moe/wiki/Buffs_%26_States_Core_(YEP).

// Set the combo counter for the state.

It would create like a custom variable, in a state which is very useful and would display the number on the state like in my original images, I'm not sure how hard, or if it is possible, to make compatible with Luna, but if you were able to or show how, it would be very appreciated, I've spent hours trying, but don't really know how.

Awesome news, thanks for the work you are doing, to help show how to use this amazing tool fully.

Also for a future example, I don't know if its possible or not, but if it was. Showing how to use the, state counters info, for like gauges and text etc, then you would be able to create those, into custom gauges for all kinds of things. But like I said idk if that is possible, just a bonus idea.

"Update the Sideview Project with a sample of State Turn Counter. This is for Yanfly Battle Engine Core users." Will that also mean, that the custom State Counters from, the buffs & states core, be possible to display with Luna?

I've been struggling to find a way to make them work, would be amazing if it does.

So I was wondering, does anyone know of a way to add  Yanflys Buffs & States Core, into the ymls so that the custom counters appear?

The image on the left,  is using code from the demo project to display states, but doesn't pick up the custom counters, the other image is when you have an ally targeted, which it does display them. I figured since it seemly seems, able to display through the right image, there must be a way to make it be displayed over the normal state display. 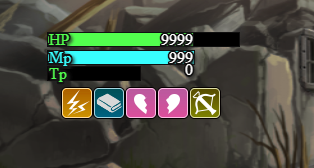 I've been trying to figure out some workarounds that seem to work fine so far,  instead of being able to use the dual linked feature, I just have it add/remove "cannot move state" to the other member, which just resets their atb, while not as good, a decent enough work around.

As for the summon one, I've just used events rather then the plugin to summon, which so far seems to work and along with your plugin, but who knows if ill run into future troubles.

So take however long you need, I would probably only want dual link, with Ellye's ATB to work now anyway,  if you ever got around to it or found what you use to have for it.

First of all, I'd like to say this is a great plugin, which creates many cool new possibilities to battles and what you have done is really cool, for people like me that would have no idea how to make this possible. So my question to you is, are you able to make this plugin compatible with these two plugins as well?

Another Atb plugin like yanflys, but seems to work better with what I was going for in my game, your plugin works with this, just doesn't seem to be able to use the dual linked feature you added with yanflys one, so I don't know how hard it would be to add it with this one too.

A plugin that allows you to summon an actor into battle, I've tested it and it doesn't seem like your plugin is able to pick up the character when summoned into battle this way. Once again I don't know how hard it would be to do, but it would allow the possibility to, have summoner like classes or pet classes, which has their attacks go through the owners commands with your plugin.

If this is too much to ask I understand, I don't want to make it seem like you have to do it or anything.