Game Off 2022 community · Posted in Streaming your Game Off development? Drop a link here!
IcyLava21 days ago

Going to stream in roughly an hour: https://www.twitch.tv/icylava_

Will also stream on other days.

I like the music. It's fun to strategize where to plant your sword.

Thank you, glad you enjoyed it! I tried to make sure not to make it too hard, and also to make it forgiving even if you die.

Thanks a lot! I'm pretty sure it sticks to 160x144, but I do think the camera can move on subpixels, hence why certain objects can appear shaking, because on one frame they're in one position, then on another they're off by 1 pixel (which appears as a huge jitter on a scaled up 160x144 display). I'm not entirely sure what I can do about that, maybe ensuring the camera doesn't move on subpixels, but all the objects in the game also move on subpixels so I don't know if that would help.

Thank you! Glad you enjoyed it!

Thanks for playing! I'm glad it was worthwhile for me to make that animation!

I really appreciate you playing on stream, wish I could've been there! It's always nice to actually see how a player responds to things in your game. And thank you for the compliments!

Thanks a lot! I tried my best to make a complete experience within the time limit given (and in fact I started a bit late). I'm glad it shows. But yeah, the downside is that I didn't have enough time for more variety in the actual gameplay. Still, I'm really happy with it!

Amazing! There's so much variety in the enemies, the levels, the moves. The art is great, the sound and music is great.

The gravity is a bit too intense for my liking, but other than that, it's great! The graphics are fantastic, and so is the music and sound.

Something about this reminds me of Nitrome games.

Man, the room with that last petal was brutal. Never thought I'd feel bad for a flower!

I figured it was appropriate for this sort of game to do that, kind of a punishment for not taking out the enemy. That said, sometimes you can't see the enemy ahead, so I can see how that could be frustrating.

Thank you! I tried to focus on the polish and make it kind of like a full game (though of course there's a lack of content).

Reply
GBJAM 10 community · Posted in Hi I will be streaming your games today at 7pm (cest)!
IcyLava68 days ago

I'm pretty sure I'll be able to be there.

Thanks! I really spent some time on the cover art, and had to learn a thing or two since I'm not a pixel artist. I think it was worth spending that effort!

Thanks! I took inspiration from SMB1 for the countdown.

Thanks! I appreciate that you made a video about it :)

Thanks a bunch! It was challenging to make the soundtrack with the limitations but I'm really happy with how it turned out!

Thank you! Well you're not completely defenseless, you use a melee attack when you don't have carrots. I did consider taking it out though.

Yeah I tried to impose some limits on the audio and graphics to make it feel authentic.

Like the other person said, it takes a long time to grow the berries, and it doesn't help that there's a long delay when you sleep. I couldn't afford anything other than seeds and it seems impossible to beat the monsters (I couldn't beat a single one), I don't know if I'm missing something.

The graphics look quite nice, though I did notice that the sprites don't snap to the pixel grid when they move.

The music is a bit repetitive and annoying, but I like how you have several similar themes for different areas.

I didn't enjoy the game unfortunately, but from what I can tell it has a lot of things you can do in it which I find cool.

Thanks! I tried to keep that flow of constantly moving forward with the level design, it's tricky because you also need variety in the levels.

Nice! Thanks for playing!

Wow that's fantastic! It's really cool to actually see someone playing it!

Thank you! I really tried to make sure that the whole gameloop is satisfying.

Thank you! The collectables were originally only meant to be ammo, but I felt it was appropriate to also make it your health and have it count towards your score.

Yeah the game needs more variety for sure. I focused on other things, like title, intro and ending screens, but really felt that nagging feeling that the actual gameplay part feels a bit empty.

I'm glad you enjoyed it! For sure, I had that feeling as well. I wanted to add more enemy types but chose to focus on other areas instead.

Thank you! I tried to really double down on the gameboy aesthetic, even though I haven't played that many gameboy games.

I'm glad to hear that! I worked hard on those, I'm not a pixel artist so it was tough.

And yeah I tried to limit myself in ways that make it seem more gameboy-like.

Thanks! I made sure to add timers exactly for that reason.

Thank you! Congrats on beating it!

Thanks for playing! And yeah that is a known error.

I got an error while playing.

The final level has an unintended solution. You are supposed to push five boxes into the empty space on the top right. Thanks for playing :D

Oh, sorry for not seeing this earlier. Currently I don't have plans to make this into a full game, but who knows ¯\_(ツ)_/¯

First off, it's really short! I understand that it's a 48 hour jam though, but maybe a good amount of levels should've been a priority. I also don't really see how it relates to the theme.

Another problem I see is that the gameplay is sort of trial and error, you can somewhat tell where the walls might be based on the graphics, but where the chests are is not so clear. To solve that, you might have some sort of indication next to the chests, maybe make the tiles next to the chest gold or have some sort of symbol on them. It doesn't solve the issue entirely, but it makes the player more likely to find the chests, without giving away their exact position.

Anyway, I would say this is quite original. The closest thing I could compare it to is one of those pipe connecting games where you have to make water or whatever flow from one end of the level to the other.

I like the visuals, and the music and sounds fit in with the aesthetic.

This is not a bad idea, but again, I just wish it was longer.

It's kinda hard to aim and the movement feels imprecise (probably because I was using keyboard and mouse). Nevertheless, I enjoyed it. Skipped level 12 and gave up at 14 :P

Reply
GMTK Game Jam 2019 community · Posted in Share and play: Only one room or screen
IcyLava3 years ago

My game doesn't scroll so I guess technically it's on one screen. But mainly the point is that you only use one button to slice enemies and you have to time your slices to get through each level. 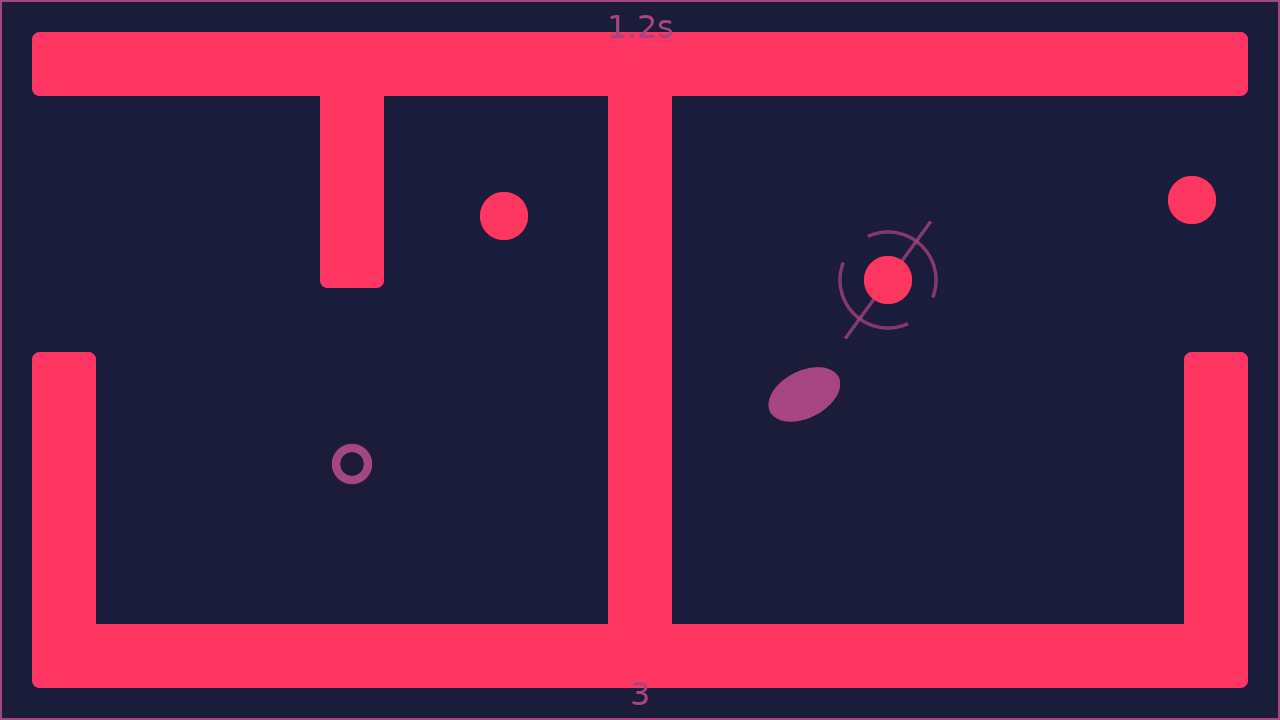