Thanks and yeah I will keep that in mind as I am planning on changing the way i release builds to here and you might be glad to know the game is coming along nicely. I will need some testers in the coming weeks as I have rebuilt lots of the  the current build into a more efficient way. I am just about to write a new post as I seen your post on here with some details. Do not fear the game and goals for the game remain as were planned. I will leave more details in the  post so look out for it sometime today.

managed to get hold of a second hand card ;) should do the job for time being gtx 970 just gona test card hopefully all is well.

Oh and no offense taken. I welcome criticism. only way we can improve games is by listening to gamers such as your self. but do bare in mind its a work in progress so dont be too harsh lol.

Thanks but im unable to actually build the game within the game engine. The game engine crashes and freezes too much since i extended the map and added in loads of the new game play mechanics. I will certainly contact you should i need help testing it before i release each build on here and/or later, on steam.

Hi Milk And Shake, yes i am working on it as we speak  to best of my ability without a graphics card. writing scripts  and prototyping in small scenes.  I currently have no graphics card anymore as it as died on me. I have not been wasting time tho. Their will be a slight delay until i can find the funds to buy a new card as me and my partner are barely getting by with 3 children one of which is only 3 months old!. I am currently working on a few  side projects creating art to hopefully help towards funding a new card. I have not give up on this at all tho. just been so busy working on what I can,   given my circumstances. what you will be able to expect in the next build tho is the things I already mentioned in the previous posts including the inventory system, Building and Crafting system along with the first lot of AI characters (wild animals such as cows, bears deer and more). you can also hunt them for food etc. the hunger thirst system is totally done now(If you run low on food and water too long it will start effecting  your characters health eventually killing you.) Helicopter's will be in however still need more work and boats also along with more drive-able cars and somewhere that you can buy them and fuel them(yes fuel system is pretty much done). I have also been doing more work on the conveyor belts and a few automation machines but may not be in the next build.  Reworked the jobs system for delivery jobs, fixing a lot of the bugs and reworked the way it works(mostly behind the scene stuff). I have built  the map(still need to add more to the scene and add more city's etc) but you have a full open map with islands and sea.   hiring employees will be in a bit later as i want to get a solid frame work for the game. They are going to be in the game because I also really want them in. its the point of the game i want to create and also  play myself! :) I will write a new blog later this week. I have no intention at all to give up  and wont. Its kept me motivated and I enjoy it. The only thing that may slow me down  is if get a part time job for time being but I am currently trying to avoid that by doing some side projects like creating art for games and even  thinking about making an app. Have  any more questions don't hesitate to ask. just fire away and i will reply asap :)

sorry deliver them to the locations when done

I will be releasing a new build in the coming weeks with better guidance to get you started.  Plus bigger map and more content. please bare with me :)

im sorry to hear, could you send me your specs and also which windows are you using?

Hey Mr.Waffles thank you!.. I will be releasing a new version either later tonight or tomorrow fixing those issues and finding the jobs will be a lot better too. I am also adding a new van which you will be able to purchase from the garage which I also added along with a warehouse where you collect the job and boxes. I am creating a temporary pause menu whilst I work on the real thing. it will be very basic  for time being just to enable people to get back to the main menu. I have also fixed some issues I had with the dialogue which was supposed to be in the current released build where you interact if npcs to receive jobs rather than just walking into a trigger area in which you will now be given a bit of direction so you know what your doing.  I just have a few bits to fix and sort out today and if all goes well I will  release the new version tonight if not it will most likely be tomorrow! :)

Well, I have been discussing this sort of topic recently with a few other fans. Now currently the plan is to get a lot of the basic mechanics working and then build onto that. My idea to start with was to come to a foreign land/country and start out with nothing but the clothes on your back. start out with survival sort of mechanics and start crafting goods and sell them to local stores or work jobs and then work your way up to having your own industry's like factory's with conveyor systems. wiring up all your  machines and building your own warehouses/ buildings and shops.  Intention is to be able to hire workers that actually turn up to the job on shifts they are given and given you get enough research you can eventually have robotics arms etc automating your factory's  instead of workers as a way of making labor cheaper.  But  as for crime, I am going to implement jobs like working security having to fight criminals off from robbing the banks or stores. Since i have been working hard to get good shooting mechanics which are still to be implemented I am now planning to start adding criminal ways of doing things like fraud, robbing stores your self and maybe just maybe adding in drug dealing/ weapon dealing and any other ideas that may pop up later through development. However because i have not started work on the criminal jobs etc they may not be implemented until I have most of the other mechanics implemented like the building/ crafting mechanics that I have been working on and other things like the hunting mechanics.  As for a time frame for when the criminal jobs will be added to be honest I ain't entirely sure but they are coming. In turn i will also have to work on the Police AI also which may take a bit of time because I am still working on traffic and  pedestrian AI. I am now currently working on this game by myself so as you can imagine I have a lot to do how ever I have been working on a lot of the mechanics for the past year but still need tweaking and implementing into the game. I am also doing this in my spare time but recently been spending every night doing it give or take sometimes I like sit back like anyone else and play some games or spend time with my kids. :) I am releasing a new update hopefully later this week making the delivery jobs more playable and fixed some bugs. I am also still fixing a few issues i have with the dialogue system but will be in the upcoming update, along with a new van which you can buy from the garage which I also implemented. After this  update I will be extending the map and maybe implementing boats as another way of travelling or  delivering goods and no doubts some more bug fixes if people find any. I also want to implement some bears, wolves and dear into the wild for the player to hunt for food. I will write another Devlog along with the  next update with more details on what to expect over the next few months. Expect more frequent updates now tho! things are moving along much faster now and any suggestions like yours are very welcome and will be considered as the intention of this game is to play the way you want.  Short answer to your question.....Yes you will be able to play as a criminal when and where as you choose. 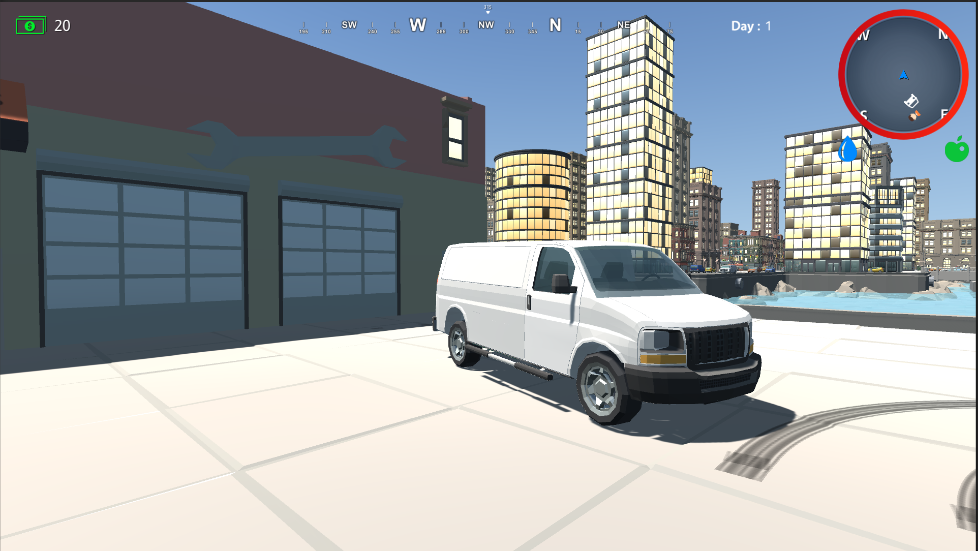 Hey thank you very much I am updating with a more playable demo hopefully next week :)

Thanks for the feed back we will adjust that right away. I am pretty new to Itch.io atleast on releasing content side of things anyway! thank you. :)

please check out Simpoly Business using the link above :)

You get the access to the same prototype wether you purchase or not. im new to itch.io bare with me :)