The only complaints I have are the script has a couple of misspellings  and doesn't flow too naturally, and the Ghost's design isn't 100% consistent (sometimes she has bold black freckles, sometimes they're more blended in and sometimes she doesn't have them at all).

Other than that, the plot is fine, the art is great and I can't wait for more!

"Unfortunately that's kinda true. The final game is ready, but it's in publishing-hell, some tools are being develop to create ports to consoles and... it has been in that state a couple years."

oh man, that kinda sucks. I just assumed this was the typical situation of either A.) the Dev lost focus/interest or B.) the Dev wasn't getting enough money, but the fact that it's your publisher holding things back makes it worse.

"However, if you're interested in testing the full game write me an email at gagz9k@gmail.com to see if I can sent you a release candidate of the full game."

I couldn't do that, I'd feel like I was robbing you. I will buy the game if your publisher decides to get the lead out and release it at some point. if you can pass this sentiment onto Gamuzumi (I assume that's your publisher, as that is who is listed on the Steam Store page), that would be much appreciated.

also, thanks for responding. I would've never known any of this if not for you.

I can only assume that this project is dead, there hasn't been an update in over a year and the dev has been radio silent on here as well.

Really disappointing, because this was one H-game I was really looking forward to after playing the demo.

Looks really good, any plans for an English release?

A big problem cropping up on Itch currently is that of scammers/bootleggers, especially in the NSFW creative community; there was the case of the Dieselmine Scammer, who was outed by HentaiWriter on Discord, the Dottoru Scammer, the Ses Scammer, and the Ru-Item Scammer who is still currently active, alongside many others who have yet to be caught out.

A lot of devs usually have a pre-existing form of communication; JP Devs have Ci-en, EN devs have patreon and everyone who is trying to grow has a twitter.

I propose that games (specifically those that have a former presence on other storefronts) be held in confinement by itch until contact is made with the dev through a reliable network.

If it is them putting their game up, everything is peachy keen. throw it up on itch.

if it's not, the dummy account is banned. (and maybe do more harsh punishments; IP ban, MAC ban, etc?)

Download link is gone both here and on patreon.

an hour ago the game page was updated to remove the comments. 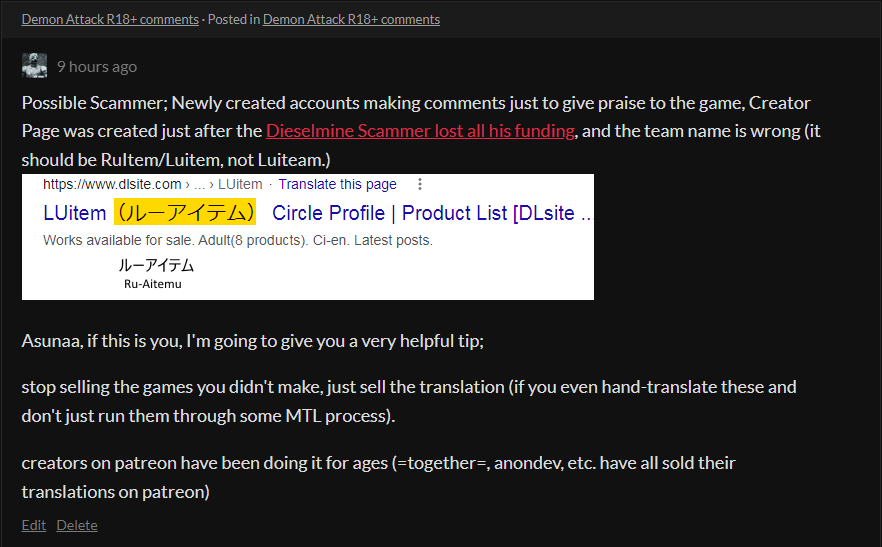 wonder why that was?

I'm convinced you're the same Scammer as the Dieselmine situation now and you're trying to hide evidence.

Possible Scammer; Newly created accounts making comments just to give praise to the game, Creator Page was created just after the Dieselmine Scammer lost all his funding, and the team name is wrong (it should be RuItem/Luitem, not Luiteam.)

Asunaa, if this is you, I'm going to give you a very helpful tip;

stop selling the games you didn't make, just sell the translation (if you even hand-translate these and don't just run them through some MTL process).

creators on patreon have been doing it for ages (=together=, anondev, etc. have all sold their translations on patreon) 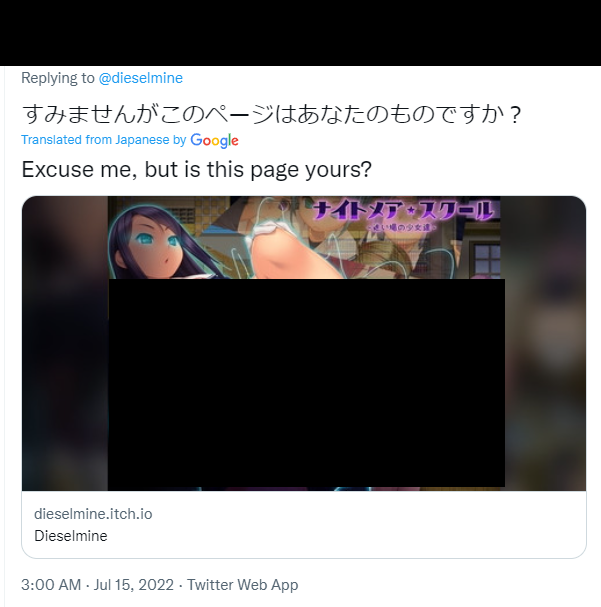 except that's not true, is it?

I have screenshots of you in a DM talking to someone trying to get them ( a very successful H-dev) to advertise your game. you did nothing to prove that you were dieselmine and straight up refused to post a tweet on either @Dieselmine or @DieselmineL.

and then your page gets taken down two days after I post the link to it to @dieselmine?

come clean, make your own games and then you can get paid. 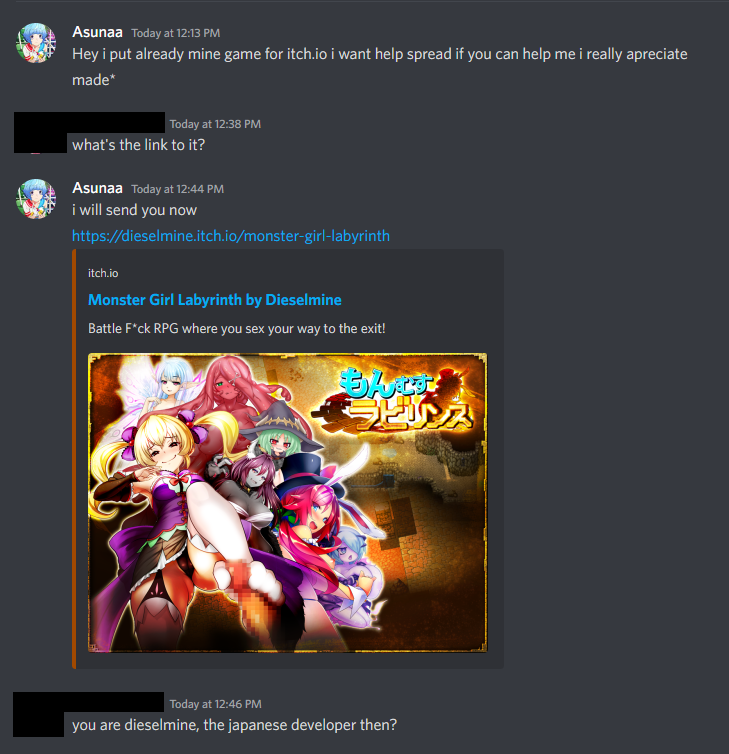 for anyone wondering why this game and Monster Girl Labyrinth got taken down; the person who put these games up is not Dieselmine, he's actually a "modder" (read as Pirate) known as Asunaa.

they fan-translated Monster Girl Labyrinth and sold it on this storefront (which is illegal) and straight-up ripped the official DLsite Translation of Nightmare School ~Lost Girls~ (Which is EXTREMELY Illegal).

probably because you are not the original creator, Asunaa.

Right now it's leaning towards FemboyxMale, but will there be more FemboyxFemboy (I'd assume so, since we still have Anubis and the Lich King to look forward to) and FemboyxFemale content?

Just got to 20/20 with everyone who is available, hopefully the next update won't make me have to restart.

couple of bugs I noticed were;

looking forward to seeing what else you have planned in the future.

Where'd you hear that? Last update on patreon was over a year ago and they've gone radio silent on the discord.

pretty fun FNAF-esque game, hopefully it won't become much more complicated than it's current form; A problem the FNAF sequels had, in my opinion.

the animations are nice, if a little stilted at times (the Trick animation at the end of a successful night has some clipping issues) and I'd like to see more than just silent "loop" animations in the full release (maybe 2 alt angles and a finish animation would be the perfect mix? just giving my two cents).

Reply
SLOOTER community · Replied to BuxomDev in Will you add defeat events?
Golgom93240 days ago

sounds very similar to the system in H-Doom. for bosses and unique enemies will it be a 100% guarantee that they'll go into "defeat mode" instead of just getting killed off?

actually pretty cool little proof of concept, I certainly would not be opposed to seeing this become a full game.

Aren't you guys also working on another game where you play as a succubus? Vaguely remember the CEO of Critical Bliss retweeting it.

do you have plans to release the uncensored version on itch.io? paid for, of course.

just to make it 100% clear; this patch will revert all the characters to their original design, along with their h-scenes?

Reply
Aolta community · Replied to Hornblase in How to move again after sitting down?
Golgom931 year ago

sorry just saw this message; the two places I've encountered it are at the morgue when going in (the guy that buys stuff probably caused it) and when exiting Evergreen Hospital (sleeping guy definitely caused it).

Reply
Aolta community · Replied to Hornblase in How to move again after sitting down?
Golgom931 year ago

just thought I'd add something to the list in terms of bugs;  when leaving or entering a location you can cause a softlock. I think the cause is if an NPC is too close to you, you'll start dialogue with them and transition to the new area, leaving you stuck with an empty text box. 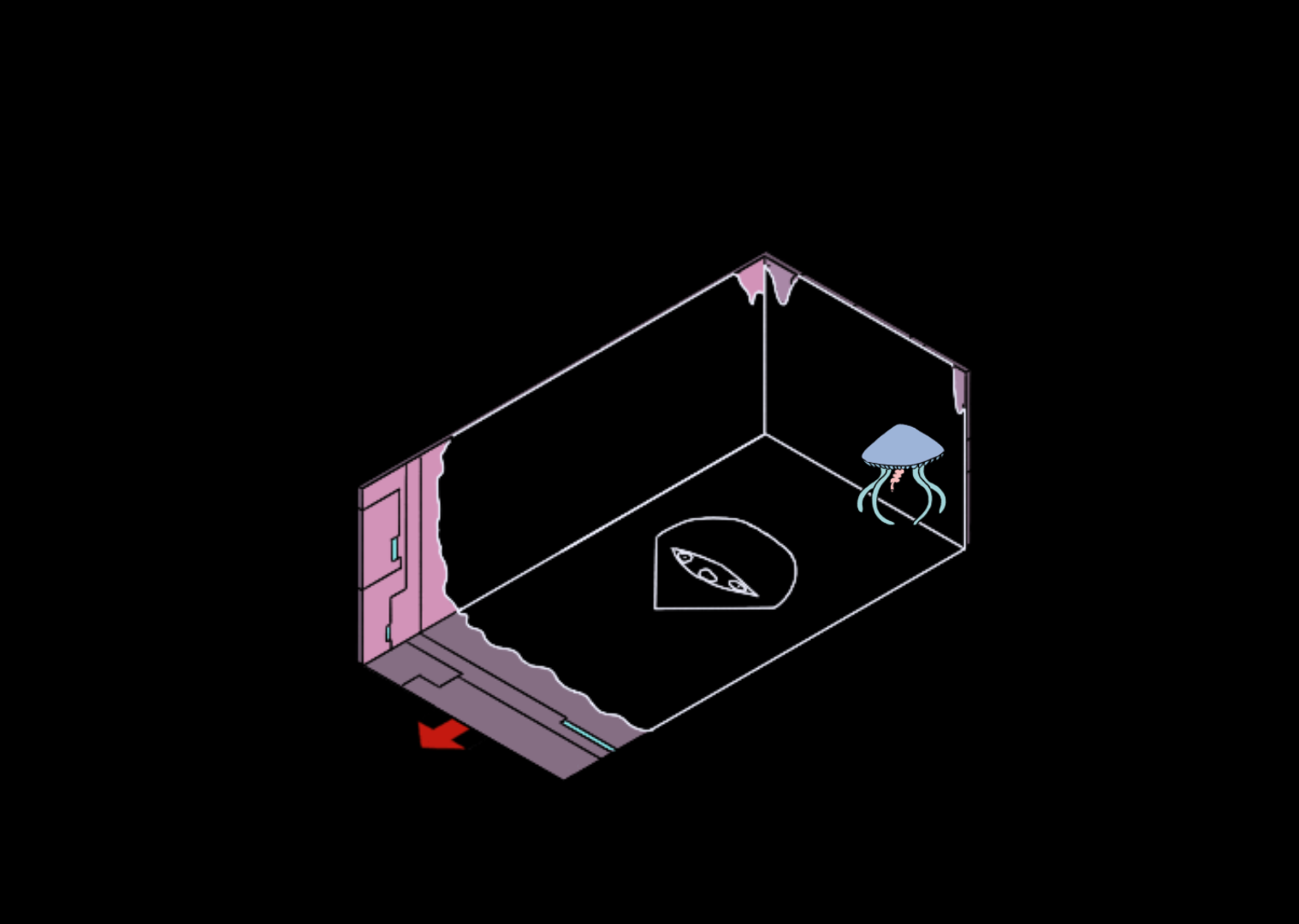 strange room I found behind the toilet stalls.

"why the hate"? counter question; why the entitlement? you're not even planning on buying it and are complaining about it being delayed.

I can understand pirating AAA games, most of the developers are scumbags that like to insert microtransactions for more revenue, but most eroge titles are made by a small group of people, usually not more than 5. 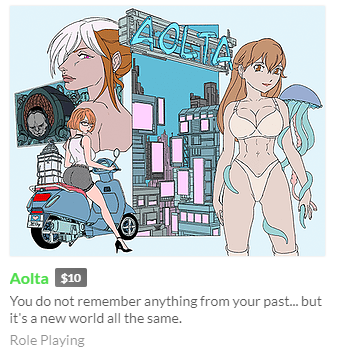 been moved to the 30th because of a bug in the finished release, afaik.

at this point I'm done looking at the aolta page; Hornblase, respond to this thread when the game's actually out, then I'll buy it.

what happening with this game? it's been on ice for at least two years now.

Hornblase hasn't even changed the deadline that passed :(

I think the problems I have are that talking with Jun feels inconsequential, the viewer numbers seem pointless, internet has like 2 websites to go to and there's no variation with the sex scenes. if these areas are built upon I think this could be a pretty successful game.

keep up the good work

not a big fan of the gameplay; I'd prefer just a regular match 3+ mechanic, or at the very least make it so that reverse twists aren't a limited commodity.

Both of the inspirations for this game are NTR games, is Mistress Carmilla going to be the same?