Funnily enough, most of this was corrected or worked-around by switching to PC (and a day getting up to speed with the toolset)! Feels like a native app here. :)

Hey JP. I've only ever used Playscii for image conversion, which has provided endless enjoyment. I knew it was also a powerful drawing tool, and I'm super jazzed to learn today (after randomly catching your talk at Roguelike Celebration) that it's also a game engine (though puzzled to see there aren't more creations floating around made with it). After sketching out a game concept I've had stewing in my head for a bit, I think this is going to be a great fit.

I wanted to know if you'd consider a few QoL type thoughts I had after poking around a bit & looking through the manual. I do have "Learn Python" as a longish-term goal, so perhaps there's a way I can kludge it myself someday, but:

• Is it programmatically possible to pan an Art while the char/color picker's open?

• I'm sure this will improve with time, but a shortcut I could see using a lot is the ability to cycle through tiles. Going back to the picker to find the exact right tile takes a moment like a medium size speed bump. Holding a modifier and scrolling through active tiles to paint would rock hard. I actually hope this is a low-key feature I'm missing.

• Last one, because threes — perhaps a toggle to lock zoom on Art center? Could be a nice default to keep Art in frame at multiple zoom levels.

With news that Adobe's buying Figma, which is neither here nor there, it's real nice to have creative software that works and is fun and good and not terrible in every way. Thanks for your hard work.  👋

Reply
Escape from Aeon community · Posted in Is the game dead? :-(
Ghostknot Games1 year ago

Hey CTRL, thanks for asking and playing! It's been bittersweet and inspiring watching fans test out and talk about EFA recently! Development has paused, for lack of a better term. EFA has been a wonderful downtime project for us both, but since covid, I've been without regular work and my downtime has been spent hustling, working odd jobs, or launching a design studio so I can make money (!) — so that's made focusing on it rather difficult. Rauno has been waiting patiently for me to get my shit together in the meantime. :) Besides the bug squashing you mentioned, we have more enemies to implement and balance before we could rightly submit another release.

All that said, we're still heavily invested in completing EFA, rest assured. Even after all this time. :)

Hey Dirty Grandpa! Thanks for checking in on us. :) Hope your 2021 is off to a great start.

The sum of the general state of the world, minor personal/life difficulties for at least half of Ghostknot Games, and a handful of other side-side projects meant we definitely slowed development for much of 2020. After internal deliberation and discussion, we've decided to release a truncated version of EFA — we had ambitious plans from the start, but a released game is better than no game, or at least better than a game stuck in development hell. It'll be tighter, a little shorter, and hopefully a little more fun, with the largely the same systems and mechanics as before, but leaving some of the loftier elements on the cutting room floor.

Release date is still TBD, but 2021 is our drop-dead goal.

Hey! We've had a fiddle with the UI since the last build, so I'm sure something is causing a hiccup at 1440; likely explains Submit not registering as well (but we did receive feedback yesterday, a few times — so there's likely a separate notification issue as well). All conjecture on my part, but I'll huddle with Rauno and we'll get it situated. Thanks again!

hey! major,  major thank you for playing and providing in-depth criticism. means the world to us.  a few caveats/notes:

I'll break down what I can, and hopefully it's helpful!

> How do you identify the unidentified module

this is planned to work in the same way as recharging module abilities, meaning the research occurs as you explore the map (reveal unexplored tiles). a research bar is in the implementation phase, and will operate just like the experience bar so you have a better idea of how research is going. in fact, here's an (ancient) writeup from our design doc:

If unidentified, an installed module will reveal its behavior after 3 recharge cycles. One cycle requires 100 charging units (so, use a module, then explore/uncover 100 tiles to recharge, or 1000 [1/10th of a recharge unit] turns without exploring any new tiles).

as you have noticed, there's an "ID" slot in the inventory, which is where research is planned to occur. but unid modules can also be installed (as they operate currently) and used without proper identification (as some modules can malfunction and hinder the player, as a cursed item would in other RLs). long story short — it's not 100% implemented at the moment!

> Is there a way to "rest" like in many roguelikes? A way to heal without finding one of the hard to come by, red stims?

you can wait in place with [NUM5], and is planned to be remappable in the future. healing is (currently) accomplished through select module abilities and stims, and we're adding some interesting things with vitality tweaks via other modules in the future. as for now, it does make games short, difficult and relatively unfair.

> Is there (or will there be) a way to compare things without picking them up?

[L]ooking at an item on the ground will populate an "equipped" window in a future build; i can see some interaction states working with the inventory open as well for comparisons similar to how CDDA works as well. again, just one of those things we'll have to get to in the future. frustrating, i know, but it's notes like these that help us stay on task and consider what else needs to be completed!

> Do the stats only do what the box says

at the moment, yes. the design doc has some other things to add to the mix in each stat that currently are not hooked in. early on, we were determined to cut out the typical wait & regen mechanic to open up possibilities with modules, and this was to be countered in part with the aforementioned "other things" from the design doc. think of stats as they are as a proof of concept — and in fact, the whole of EFA is certainly that as well. there's a lot of moving parts, and for a relatively green studio, much of our implementation, balance, and conceptualizing is a trial by fire. :D we're chipping away at the excess and arriving at the fun, though, slowly but surely.

> What do the three shapes in the armor specs represent?

these are your armor value, CU modifier and strength requirement (which now occurs to me is missing from the character panel; seems the symbols didn't survive a few passes in the stat area. i'll be sure they're accounted for somehow in an update). but agreed — it's needlessly cryptic right now, and there are ways to explain what you're looking at. take a look at a previous mockup for some real symbolsanity: 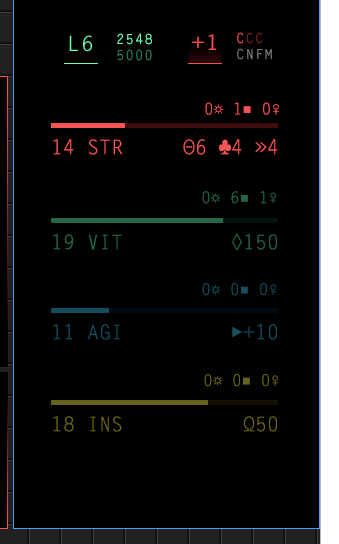 > Do you absolutely HAVE to destroy things to get drops? Like the chests, ammo boxes, medical stations, etc. Or is there a command to just loot them?

currently, they must be destroyed. chests can be straight up looted. the potentially unfun reasoning is an opportunity to build Risk (ask me about this other not-fully realized concept some time :D ) and make scavenging a scary, risk/reward proposition. and, as before, it's a concept that requires more thought and balance before we release, let alone put forth a traditional demo. while the dispensers should be the primary source of non-dropped loot, that's another avenue requiring way more cleanup and balance.

> Sometimes there is a =|1 symbol (like an equals sign with a line through it) that appears  just left of the character section of the game on the right. What does it mean or represent?

well that is frustrating! (an aside: kindly post a link to your twitch so i can catch the next stream — that'll be super helpful as well) that little button is your level up indicator, meaning you have 1 point available to increase a stat.

> This last thing isn't so much a question as a criticism.

you will hear no arguments against your points here — largely because EFA still exists in a very conceptual state, the earliest of accesses. if the back-of-napkin hierarchy of game release is full release > demo > beta > alpha > in development, we are very much still in development. i spent a decent amount of time on the tile, UI and mechanic design — all of which receive constant tweaks — but some of the toughest work is refining, rebalancing, reconsidering and editing. and the development half opens entire galaxies of both potential and headaches. :D

but, speaking for bothmyself and Rauno, we believe in EFA, in its merits and unseen corrections and the concept as a whole, and we want to get our riff on the RL thing out into the world. if i could do it again, i'd rescope EFA into something smaller (and in fact it was intended to be a mobile game, inspired by wanting to improve the movement system in Cardinal Quest, of all things) and more manageable by a 2-person, globe-spanning team. with that said, there are steps we can consider to make improvements more meaningful:

anyway — i want to express our thanks again for streaming, sticking with broken builds and mechanics, and reaching out with feedback! it keeps us inspired and on task. i was recently cut from my main job, and EFA has been on a very distant back burner as a result, but not a day goes by that i'm not thinking about or quietly sketching things out something EFA related. i know "sorry, it's broken and we know" isn't the best answer we can give, but that's the reality at present. just know it's definitely not where we intend to leave it. :)

Reply
Escape from Aeon community · Replied to CTRLhasESCaped in Any update on the next build?
Ghostknot Games2 years ago

We'll be sure to take a look at it, CTRLxFU. Thanks for posting, streaming, and using the feedback system  — it's incredibly helpful!

hmm, interesting! mind sharing your operating system and specs? i'll pass this on to the dev half and see what we can scare up. thanks for posting!

we're also implementing a feedback screen in-game to make this sort of thing a little easier.

I love this! Great music too. By my 3rd game I got a decent production line happening. I did get stuck with 0 stone and planks early on; might be nice to have a stone equivalent (doesn't require further processing) to wood for basic structures. Also numpad movement would go a long way! And F1 or clicking Help crashes on my Mac. Keeping a close eye on this!

Thank you! We've...often talked about going full XCOM and making EFA team-based, but it's perhaps better served in its own dedicated game. Someday, maybe! The UI is definitely an uphill battle, but we're cranking on it daily. Appreciate the kind words!

Thank you! Haque's been a blast so far — very impressive.

Hey, thanks a lot! This version is quite outdated, and we've squashed quite a few bugs since (and added a customizeable keymap too). We took a microbreak this month but will be back on it shortly — stay tuned!