Have you read the instructions for controllers above? If not please do, and see if that solves your issue. If you still can't get it to work, please let me know what gamepad and browser you're using.

Thanks for trying out my game 😀

Thanks for this! Really comes in handy. I have however noticed that it doesn't seem to work on some computers.

When I launch my game I'm checking for an update, if there is one I download the updated version to the working_directory. When the .exe is downloaded I run it with your script. Work flawlessly on two of my computers, but for some reason it doesn't on the last one I tried it on 🤔

I don't know if you have any idea why?

Anyways, thanks for making this! 😀

The game mechanics seem very impressive and it isn't hard to tell you've put a lot of time into this game. However it really lacks a tutorial or something to explain the game to a beginner. The game seems very well made though, so don't get me wrong. It's just not very welcoming to new players and therefore a bit confusing. I wasn't entirely sure what I was supposed to do when playing the game.

Also why does the game launch an .vbs file after exiting (removeport.vbs)?

Could you please elaborate or send a screenshot of the error you're getting? 🙂

I'm glad you found it helpful! 😃

That's great to hear! Really appreciate your support :)  Give me a follow and I'll make sure to keep you notified when I have something playable.

I'm actually working on a new version of Tough Islands, which will include lots of exciting stuff. Might be a while before I have something playable though :)

Thanks for the follow and your kind words! Much appreciated :)

The link should be working now. Hope you can find some use of this and don't hesitate to ask any questions about the asset.

Hi Ladeio and thank you for playing the game.

Alternatively, you can just use this link to open the manuals: https://sites.google.com/site/toughislandsen/

Hope that works out.

Glad you enjoyed it. I know this isn't an original idea. This was just a little hobby game I made in a day or two. Thanks for letting me know anyway! :)

Hi and thank you for your feedback.

I'm not working on the game anymore, for the time being, but I appreciate your kind words and your feedback.

Thanks for your idea and sorry for the late response. I must have missed your post. I like your idea, and I've thought about it myself too. I can't promise anything, but I might implement it in the future.

Hi. I'm sorry for the late response. I missed your post.

I don't speak Russian, and the translations aren't the best, but I'm going to try to understand your issue.

From your screen shot it seems you placed iron instead of stone on the ground, when trying to make the axe. That should be why it isn't working. 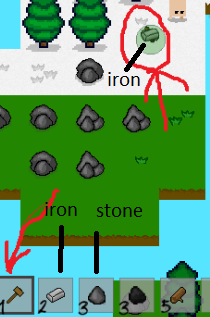 You can make axes of iron, but then you have to heat the iron first on a campfire. However, to complete the tutorial you have to make the axe of stone.

I understand your frustration and I apologize if the tutorial or the link I sent you wasn't clear enough on this.

Hi. Have you tried the tutorial. If yes try to read this explanation here:

Thank you for your suggestion. I like the idea, and will be taking it into consideration. :)

Thank you so much for your kind words and your donation! It's much appreciated :)

Thank you very much for your feedback! I thought about this, but didn't think about a solution. Now that you mention one, it seems so simple. Can't believe I didn't think of it. Anyways. I've updated the game now, with your solution implemented. Thanks again.

First of all. Thank you very much for your donation. It's really much appreciated

Just as GearBunny said, this is often a problem with games and programs developed by unknown developers. The game is completely safe, as MalwareBytes says. I'm guessing you are on Windows. If that's the case you should see either of these to screens:

If you see the first screen, you need to click "More info" to get to the second screen. Then click "Run Anyway"

I apologize for the inconvinience

The mice eat the plant, and then you have to start over, or kill the mouse before it eats the plant. They shouldn't be able to hide under the crop plots, but I'll look into it in the weekend, when I have time. Thanks again.

Thank you for posting a bug report.

This is not a feature, so it must be a bug. Mice are able to eat your crops, so make sure that's not the reason. I'll look into it when I have time. Please tell me if you have any more information on bug.

This has nothing to do with the game. This happens because you are trying to download the file to a directory on your computer that you don't have permission to write to. Read this if you need further help: http://www.rectanglered.com/tech-tip-google-chrome-download-error-insufficient-p...

Reply
Forager (Demo) community · Posted in Have you seen this clone ? Tough Islands
FelixGameDev3 years ago

No, my game is not a clone of this game. I created the game, without ever playing this game. The games might be similar, because they share the same genre, but I think you would realize that these two games are much different, if you've actually played them. I've posted an explanation about how I created my game and came up with the idea for it here: https://itch.io/t/159120/i-have-a-simple-question. Please read it.

Honestly I find it frustrating that you made this post, as it gives me bad reputation, for a game that I've spent more than a half year working on.

Hi and thank you for your question.

I'm going to try to explain how this game came to be.

Back in January 2017 me and my friend wanted to make a game. It was my idea to make a survival island game and i got the inspiration for the game after watching a youtube video by rm2kdev. In this 2 year old video rm2kdev showed a game he made during a 10 hour livestream. I liked the idea of an survival island game, but also wanted to make my own game, and had a lot of ideas on how to make my own version of a survival island game. Yes both games are on an island, you can cut things and craft things, but the similarities pretty much ends there. Of course many of the elements in the game are the similar, but they are also similar to the elements of any other survival game, like Minecraft and so on. My game has rocks and trees. Minecraft has that too, but I don't think that makes my game a clone of Minecraft. I came up with most of the elements and items of my game myself: e.g. mice, rope and farming, different island seasons, bridges, the way the chests work, the random island generating system and many more.

After making the base of our game, my friend showed me the game that you mention Forager, and he wanted to make something like that. I disagreed, because I wanted to make my own game instead of copying the work of someone else. Shortly after my friend stopped working on the project, and I continued to work on it on my own. To this day I've actually still not played Forager, so I'm really not qualified to tell you, if my game is similar to the game in certain ways. I've just watched the video of the game, and I can see that the game has some similar elements like being on an island, being able to craft things and having an inventory, but again I think that's pretty common for any game in this genre.

Later in the progress I watches a video of the game The Forest and was also inspired by some of the elements in that game. E.g. trees respawning and being able to sleep in a tent. I think all game developers get inspired by the content they see and like, and I think that's fair. I don't think copying others' work is fair and making a clone of game is unethical if you ask me. I never wanted to make a clone or a copy. I programmed the entire game myself and made the game, in a way that I think is good for a survival game. Furthermore my game is free, so I wouldn't gain anything from copying someone's work.

I hope that answers your question. If not please tell me.

Thanks again for reporting bugs. A huge help

I'll have an update ready in a few days, when I have time to fix it.

Thank you, for helping out. I'm glad you like the game. That means a lot.

I'll have a look at it later today and release a new fix. Please don't hesitate to post more bugs.

Edit: Should now have been fixed in version 1.0.4.

No problem. I'm just glad that I was able to fix a few bugs, thanks to your reports. Please tell me if the rope bug, should happen again.

I have fixed the first three bugs, but I need a little more to go on, concerning the rope randomly disappearing out of your inventory. Did you notice anything that might help me solve the issue. Like when it happens, or what you are doing when it happens?

Thank you for your report.

I am looking into it right now, and hoping to release a fix as soon as possible. Possibly later today or tomorrow.

Thank you for your report.

It all sounds very odd. The only thing I can think of, is that the wheat was only about 99% done, and needed more water to get to 100%. This however doesn't explain why it worked with another basket. I'll look into it and see if I can find out what is going on. Please tell me if this happens again or if you have any more information that could help me solve this.

Cool! Glad you fixed it

I'm sorry that you are experiencing problems with the game.

Do you see the black screen when runing the game or when making a new world? What settings did you change? Have you tried reinstalling the game?

Please give me any information that could help me, figure out why this error has accoured.

Thank you for your post. I am aware of this bug. A fix will be released in a few hours.

Should you experience bugs in the game, I sincerely apologize. Please sumbit a bug report here and I'll try to fix it as fast as possible.

Please include information about when the bug happened, any error messages that might have appeared and anything else that might help resolve the bug.

Try not to post duplicate reports, up vote other similar bug reports instead so that I can easily locate the most severe bugs.

If you have any great ideas please post them here and I'll have a look.

Try not to post duplicate ideas, up vote other similar ideas instead so that I can find the most popular ideas.