Nice gameplay idea, I love graples ;) you can further update the game if you want it to respond to players expectations (score count, a victory condition, and so on).

Still congrats for your game!!

Needs some work to make it into a full "game" indeed, but it's already pretty well done and the idea is funny. Hope you'll make an updated version =)

Ok! You can now add it with this link:

Harder than it looks! :D Tried twice but I got owned even on the second try when I thought I would be able to beat it :p

I'll try again later, but it's a well-made game, congrats!

Just, FYI: Z and X are not side to side on my keyboard. X and C are a better choice, usually.

Congrats! Especially for your 1st jam =)

You can send me the link to your game and I'll be able to send you a link to add it post-limit.

And also, make it so that the attack mode has a short duration, but you can make it last longer by taking new attack items (or by stacking several bonuses you can get stronger and beat other attack modes... then the other player may still find a defense item to cancel his attack and negate yours).

thx for contributing, your game is simple but pretty addictive with its shop system, hehe. I went pretty far and would have loved to see an ending.

Some suggestions and bugs to correct for future updates:
- make it so that updates don't cost the same, Firerate is way better than Bullet speed (which can be cheap and I still maybe won't max it)
- after several Bullet damage upgrades, the meteor health sometimes appears with several digits (I even had a 0.00 meteor "floating" around)
- the choice to shop or continue is too quick and I sometimes skipped the shop without wanting that
- Z and X are not next to each other on my keyboard, X and C are a safer choice
- my base was destroyed many times, maybe make it so that we have to survive to get to the shop, but just for a limiter amount of time (shown)
- add a simple ending after a number of waves, and a total score
- in the shop screen, "Music ACTIVATED" can make us think that we can disable it but it doesn't seem possible? I see the ingame joke, but if that's only decoration use something less ambiguous like "coffee machine" or something :D
- when playing/upgrading for a while, the shooting sounds becomes exhausting, maybe make it softer, (especially after upgrades maybe) 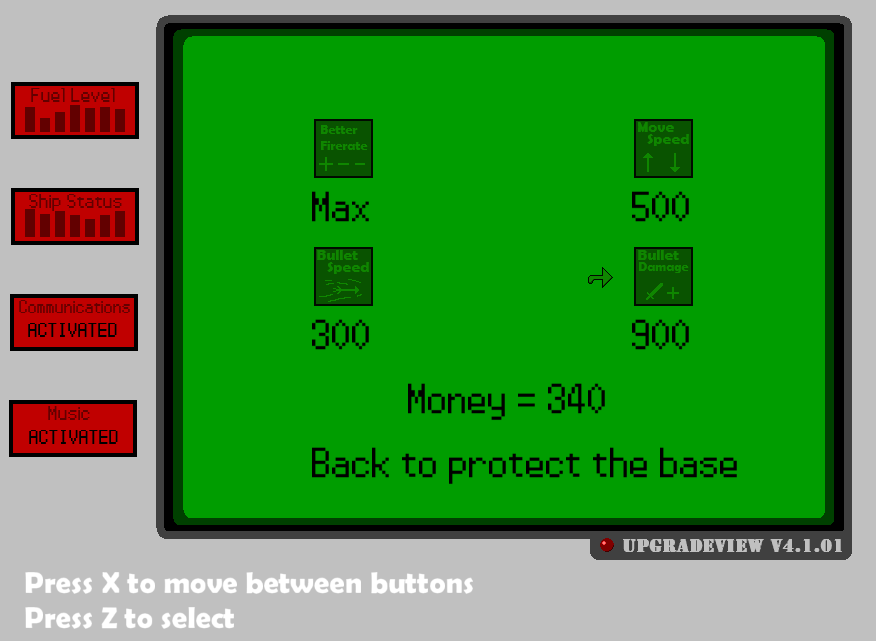 Love the color and aesthetics! And the facts that many keys are synonyms, practical.

An update could maybe enhance the starting screen (showing the available keys of example).