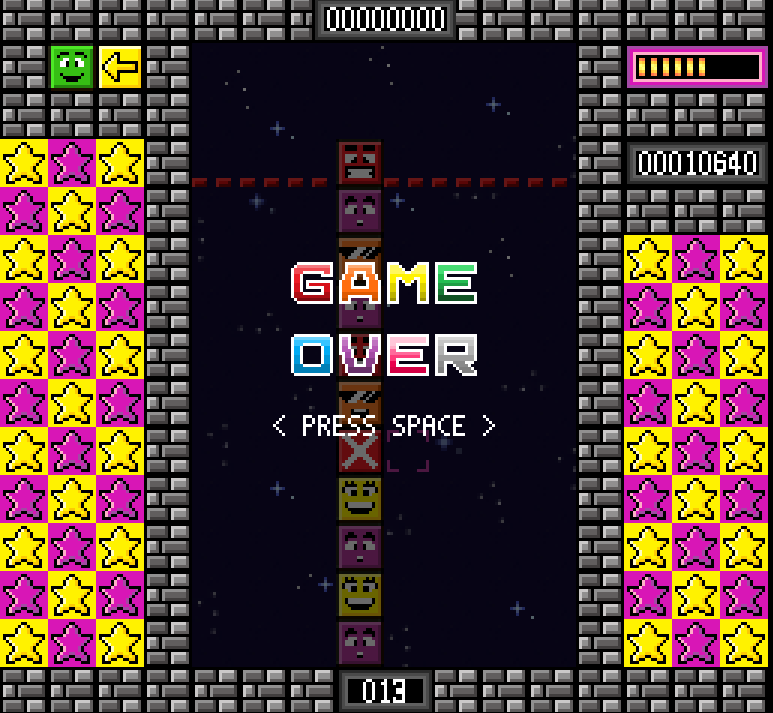 Congrats on getting the game done all of you! :)

You are epic too! :D

Hey there, updated the game just for you with this suggestion! Lemme know if you think it's better! :)

I agree that it starts potentially too easy, but at the same time, I'd rather someone less experienced/more casual to be able to  learn to play the game with it being a bit too easy for the first 30 seconds, than losing in the first 10-15 seconds 10+ times in a row then giving up and writing "game sucks, too hard".

Ideally I'd have a difficulty mode selection that would adjust the block placement time, the starting ball speed, and the score multiplier.

Thank you very much! I'm glad you feel that way, I tried to make it as polished as I could in the time I spent on it (including getting it optimized for and running on mobile).

Thank you I'm so glad you enjoyed!

It's designed to start off easy, maybe a bit too easy, but once you get past the 200 seconds mark it gets pretty tough to keep up with the ball, trust me. Reducing the time between spawning over time would break the game because you literally would be slowing down as the ball sped up.

Originally (before jam was over) someone suggested that the original time to place was not fun (too slow) so I halved it as well as increased the ball's starting speed.

Thanks for the comments! Good try!

Thank you! Controls were designed with just the Left Mouse Button in mind, because I have designed it to be completely compatible with mobile (it runs perfectly on there now as is)!

Rated yours and left feedback!

Great game. I thought theme and game-play wise it was completely on point! Top score of mine was 360 so far, but I reckon I could get a good bit higher, just wish there were some alternate buttons than 123 as my hand was cramping a bit using those. Music was nice too, only criticism of the aesthetic I had was the characters didn't really stand out from the dark background as much as I would have liked, maybe some lighting on the player or king and projectiles would have been nice.

I updated that, also made the ball start a bit faster to compensate for it!

Thank you very much! I'll consider doing that quickly before the jam ends!

Thank you very much

Are you looking for audio help, would be happy to lend a hand if so!

Reply
Houdini Game Jam 2021 community · Replied to SideFX in I had another question regarding the jam, also wishing best of luck to everyone taking part!
Fatal Exit167 days ago

That's absolutely brilliant, thanks for the answer, and it makes perfect sense.

Reply
Houdini Game Jam 2021 community · Created a new topic I had another question regarding the jam, also wishing best of luck to everyone taking part!
Fatal Exit168 days ago

I've decided that I'm most likely going to relegate myself to working on Audio for this game jam as I don't feel confident in working on a solo game and getting it done on time.

Wanted to ask what the stance is regarding somebody helping multiple jam entries with Audio should the opportunity come up?

I've done this in the past on a few jams where I have been a part of helping several teams, but I can completely understand if this is something that wouldn't be allowed to go ahead seeing as this is a jam with prizes and the like.

I think I'm gonna scrap my idea of working solo on a game as I'm not really feeling it, so I'm looking for a serious team (as in not likely to decide to quit 48 hours into the jam) to do Audio work for.

I wrote the music used in the 2020 Houdini Jam Reel, and have written hundreds of songs over the past 7 years, in virtually every style you could imagine. Some of my music has made it into games and some of it is published on streaming services. Looking for a team that'd be happy to have me help with Audio stuff. My Discord username is CillianCreates (FatalExit)#9525 and I'd be more than happy to text chat for a bit if anyone would like my help for their game jam entry. Good luck to everyone in the jam!

Reply
Houdini Game Jam 2021 community · Created a new topic First Topic! And I have a question for the Jam Hosts!
Fatal Exit178 days ago

Looking forward to the jam, I've been getting back into learning Houdini after a break as well as trying to prepare a workflow that I'll be comfortable working solo with for when the jam begins.

I wanted to ask if there is any issue with using a 3rd party visual scripting asset solution like Playmaker (for Unity) for the jam submission?

I decided to try and learn the basics of it today, as I'm looking for the most pain free solution towards designing a game with the least fighting with the game engine in regards to technical problems (gonna be using Unity for the game this time around and I still have zero interest in diving into C#).

Last Houdini Jam I used Construct 3 which was completely based around visual scripting, so unless there is a "no assets of any kind" policy, I can't really see issue with someone using something like Playmaker.

After starting work on it over 1 year ago, and then procrastinating a bunch, Thinking with Wormholes is finally here to play.

Thinking with Wormholes is a 2D, top down space arcade game. It is inspired by Asteroids, but with a unique portal mechanic and a retro GameBoy inspired aesthetic.

Here's a link to the game's page.

And here's a gameplay video!

You missed the point of the software entirely, It doesn't make sound, not even top tier million dollar AI stuff could generate music based on these ideas. This is a piece of software for musicians to get themes and ideas for music they make. Kinda like a random gamejam theme idea generator if that makes sense to you.

I just found out about this program today! Props for the awesome development. Tried it out on a quick animation of mine and I am super impressed.

However I found a funny bug. I realized that you can put equations into the fields, and generally seemed foolproof until I did a typical QA response of dividing a number by zero and CTDed, losing my project. Hopefully no one else will do something as stupid.

Thank you, sorry I didn't see this earlier!

Reply
Brackeys Game Jam 2021.1 community · Replied to JHawk Studios in Any chance for a few more ratings on my browser game before the submission period ends?
Fatal Exit1 year ago

Played and rated! Found it a cool concept!

Reply
Brackeys Game Jam 2021.1 community · Replied to MinuteGames in Any chance for a few more ratings on my browser game before the submission period ends?
Fatal Exit1 year ago

Played and rated! I enjoyed your game!

Reply
Brackeys Game Jam 2021.1 community · Replied to SnugPig Studios in Any chance for a few more ratings on my browser game before the submission period ends?
Fatal Exit1 year ago

Played and rated! Helped you reach 20 (and congrats on that accomplishment)!

Had to scrap my original review because I finally got the game going and it didn't disappoint.

First thing I want to say, I'm not sure if this is a problem with my PC (on two browsers), but when loading the game, it shows up as a blank grey screen for like a minute, no progress bar, no game engine logo etc. It looks like it's not loading at all and I nearly gave up reviewing it as (I thought) I couldn't get it to play.

As a tower defense game it's a neat concept, I really enjoy combined elements in TD games (like Gemcraft and Element TD). I'll always be someone who would give tower defence games a chance as they are one of my favorite genres. I also enjoyed the artsytle, and felt that the game as a whole was cohesive to a style.

Only other thing I wanted to say was I could see no mention of a wave counter, I nearly quit the game as I thought it might be endless (and I had built a formation of towers that nothing could pass). But then I randomly won! 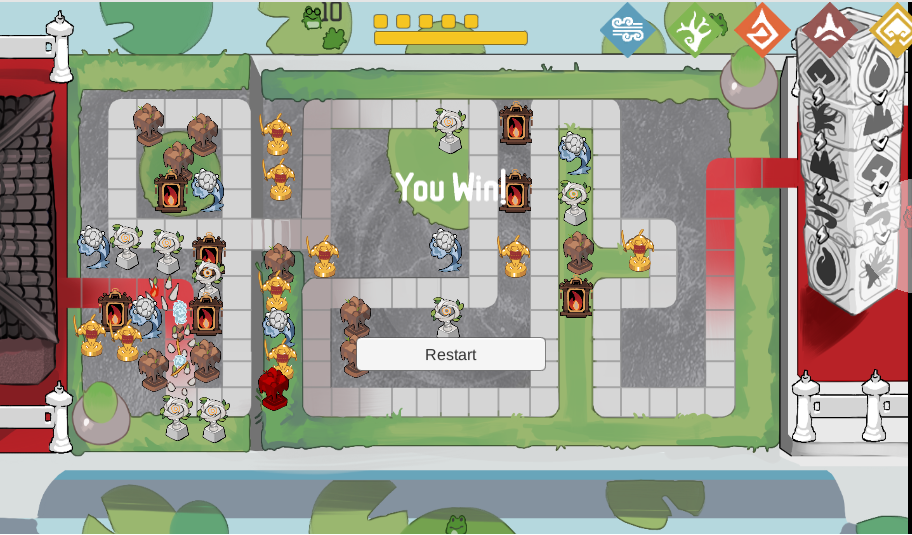 Overall happy I played, and would be interested if you played around more with the concept!