There's a fanmade walkthrough on our Steam Community Hub that's probably closer to what you're looking for. - Hallows

Hey! If I had to guess, the problem is that the demo version is uploaded as a .zip, while the full game is uploaded as .rar. I'm not sure why the .rar isn't extracting properly, but I reckon if we switch back to .zip then everything should work. It may have to wait a day or two as our hands are full releasing an update to the game, but that might be for the best as this way you can play the version with additional scenes. I'll make sure the update is packaged as a .zip when it goes up and hopefully that will solve the problem. - Hallows

We went back and forth on it for a while and it mostly came down to the experiences we had to draw from and a lack of confidence starting out. While we'd both dabbled in erotic fiction, we'd never attempted anything on this scale before, and so we wanted generally to keep the perspectives grounded to our own experiences, and that created a slight problem for M/M pairings because it was really the only perspective we lacked. I guess the short version would be that as a heterosexual man and a pansexual woman, we felt that any M/M content we wrote would probably be the easiest to critique, and given the inherent insecurities of working on a project like this we decided to spare ourselves the risk of fucking it up.

Stuff like Markus being pansexual is mostly a holdover from when we were still considering M/M content, and we liked it for his character even if we never gave the player the option of reciprocating. In hindsight, we should've just gone for it, and moving forwards we have the confidence to write things outside of our experiences and accept that we can draw on others if we're ever in doubt, or even look into hiring writers for specific scenes that fall outside our area of expertise. There's really no need for us to limit ourselves at this point. - Hallows

Yes, Rar isn't supported on Windows by default, but there's lots of free options which will allow you to extract. WinRar is probably the most popular, but there's a few others listed here: https://www.thewindowsclub.com/open-rar-files-in-windows-10/ I hope this helps :) - Hallows

Hey! Sorry to hear you're having trouble. Could you tell me which version of the game you downloaded (PC/Mac/Android)? None of the builds are RAW, but the PC build is a .Rar and needs to be extracted before it will run. - Hallows

Hey! The Android demo is still up but we haven't released the paid version of Sanguine Rose on Itch yet. It'll be coming in June, including the Android version. - Hallows

Yes! We're focusing our efforts on Steam at the moment, but we'll be selling the Steam version here on Itch too in about a month's time.

Hi! The main character is Roman, a man. There's a few scenes which can be played from a woman's PoV, but most of the game is from Roman's perspective. In our next project it'll be possible to play as a man or a woman. - Hallows

The Steam build has five epilogue scenes, a full scene gallery, and an artpack so you can enjoy the game's artwork outside of the game too! There's also some touch ups to existing artwork in the game. - Hallows

At the moment, yes. This is a short UI test we made to see if people liked the visual aesthetic and UI. A proper demo is on its way ;D - Hallows

Thanks! I love getting comments like this :D We don't have any concept art for the main character just yet since our plan is to have something of a character creation system. Nothing too complex, but the general premise is that the main character is you (or at least, someone you get to design).  - Hallows

Take this with a grain of salt because game development is tricky and neither of us wants to rush too much, but right now the goal is for a demo by the end of April :) - Hallows

Hi, I'm afraid this is just an early UI demo to gauge interest, so this one conversation is it. A playable demo will be coming fairly soon but we're not quite there yet. - Hallows

Are you playing with animations turned on? Does the animation in the Wholesome scene unlock?

Thanks! Female protagonist is something we definitely want to do, but it's hard to say when or if we'll be able to implement it. Character customisation is hella hard when all the art is hand drawn, but we want to do as much of it as we can. Ideally we'd like to be as inclusive as we can manage without having to remake too many assets.

I don't think that feature exists within Ren'py (the engine we used) without making all the images fully accessible, which we were a little apprehensive about doing in case they got shared around. Maybe in an artpack with watermarks though, it's something me and Duski need to discuss. That said, I can help you with tying up Crow. Towards the end of the scene, you can enter as Roman, or you can leave Crow and Carmen alone. You get different art at the end depending on which you choose. I think you haven't tried leaving them alone ;) - Hallows

This is one of my favourite comments we've ever received, thank you! It's so incredibly nice to have all the little details appreciated, especially the stuff that often goes unnoticed. Glasha is the most fun I've ever had writing, and I'll admit, some small part of me does just want to make Glasha Quest. Duski and I have actually discussed it before! I think if we do go back and build on Glasha's story though, she probably won't be bedding Roman (since we never really saw them as a couple, which was a poor choice in hindsight since everyone else did) but lord knows we've got to have her banging someone. Hopefully one of the characters in Joystick Bliss (our next project) will scratch the itch for you, but if not then maybe Glasha Quest will have to be a thing :D - Hallows

Yes! We're planning on having any public builds be html5, but we may be having downloadable versions too. - Hallows

Awww, thank you! We're very excited to get a proper demo out soon so you can meet all the characters properly. Very different to Sanguine Rose, but we hope it'll be a lot of fun too :D - Hallows

You're welcome :D Thanks! - Hallows

Hey! Sorry for the delayed response, I've just finished writing a walkthrough which should help: https://duskyhallows.itch.io/sanguine-rose/devlog/101501/sanguine-rose-walkthrough

Not in the first few builds, but it is a planned feature, yes! We want to make as many aspects of the player customisable as possible, but while we're getting the base game running we're using a male MC.

We've not heard of any issues on Linux before, could you post or send us a screenshot? - Hallows

Glad you're enjoying it :D Sending Crow to the tavern is an optional scene where you send Crow to whore herself out. You can unlock it by choosing to get supplies from town at the start of the game, not swapping your shift with Glasha, and then listening to Carmen's offer. At some point, Carmen will ask what you want to do with Crow. Say you're happy to let her play the whore. At the end of the day, Crow will leave for the tavern and you can switch PoV to watch her.

To Poison Carmen you want to not get supplies from town at the start of the game. Lay low, and at the end of the day make sure you feed Carmen on her knees. The next day when Glasha wakes you up, express doubts about the mission. Listen to Carmen's offer, and at the end of the day Roman will pocket something called Red Velum. At the beginning of the third day, choose to finish the mission no matter what.

For now, yes, this is just a UI test and a character introduction. We're currently working on a larger demo. We're using Unity since it has better browser integration and there's gameplay elements we're implementing which wouldn't be possible in RenPy. Enabling hardware acceleration in your browser settings might help, but the game will also be downloadable.

Yes, as well as any other epilogues or scene changes we make in the meantime, and an art pack (although we may sell this separately) which contains full quality versions of the game's artwork. We'll also be offering free versions to some of our supporters and discounts to others (depending on lifetime pledges/donations).

Yes! The versions available to our patrons right now contain epilogues which aren't part of the main game, which is free and will remain free. We intend to sell the extended version here and on Steam within the next few months.

Good spot! We've added a link now, or you can click here :)

Hi, Duski here, the artist and co-developer. In the adult industry and in the context of art926's comment, gay refers to m/m content. I know what gay is, I'm a pan woman, that's a big part of why there's f/f content in Sanguine Rose and why we'd like to do m/m content in our next game. We had our reasons for not including m/m content in our first project, and we're happy to discuss them.

Thanks! I'm glad it's working now :D Enjoy the game!

Ah, sorry, I should have tried to make that clearer. If it's any consolation I've updated the apk again, and it should work now... Hopefully... If not we'll be releasing another version in a few days anyway and maybe increasing the version number will fix things! - Hallows

Hi, I've updated the apk again. Seems to be working on the devices I tested with so fingers crossed it works for you now!

Is this the first version of the game you've downloaded? It sounds like it hasn't downloaded/installed correctly. Could you try removing it from your device and trying again? - Hallows 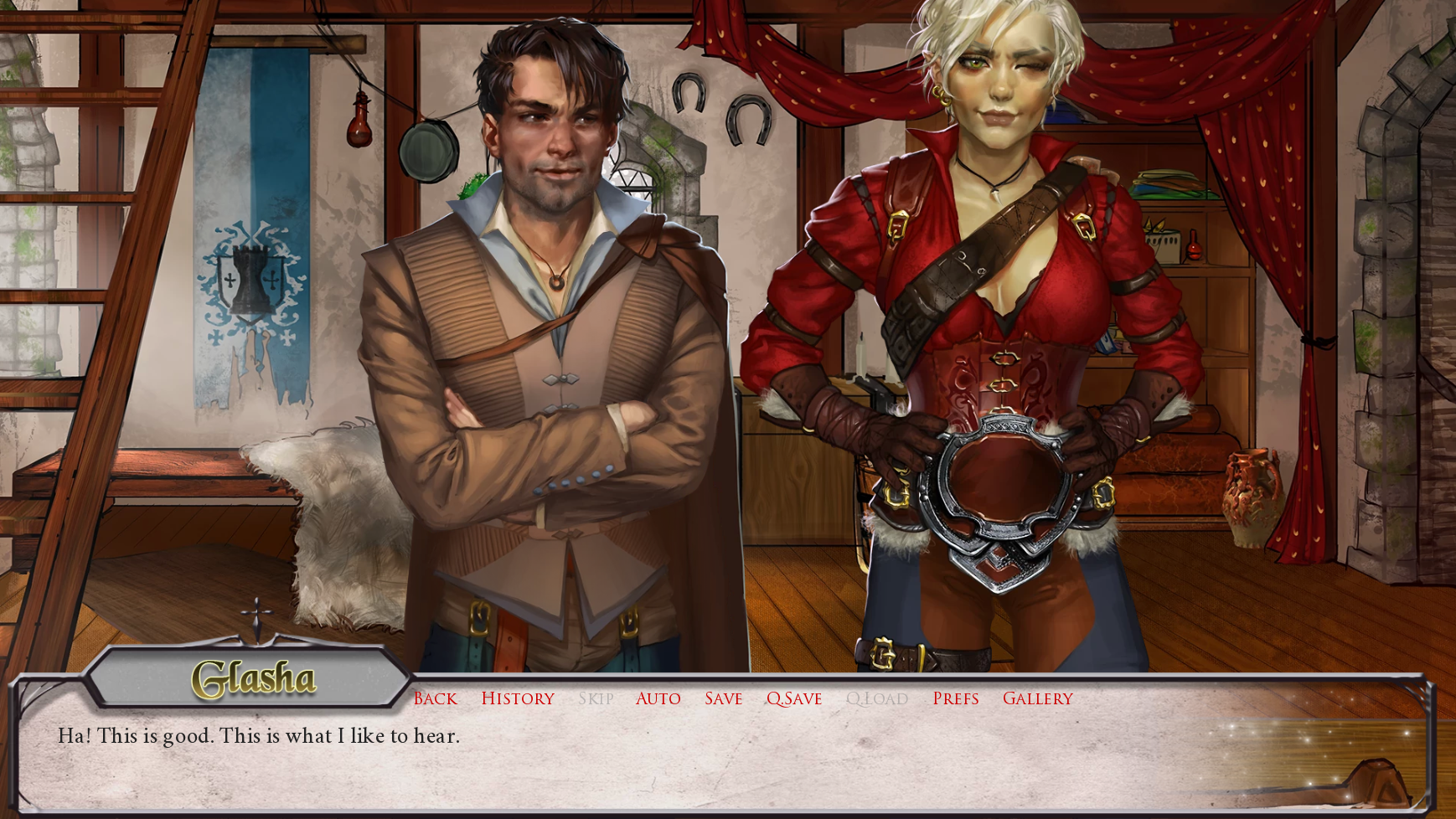 Thanks! We decided against gay options in Sanguine Rose but in our next project it's something we'd like to include :D - Hallows