That is not Eric :P

Zach would be a love interest if they hit the stretch goal on their patreon ;)

So go support them if you could :P

The game is still going, just give the dev some more times, I suppose.

Chapter 1 should be another story branching outward, and will probably have some plotline that is related to Shax and Nerus's story down the road.

They are dateable if their patreon reaches a certain stretch goal :P

Chris is so cute <3
But that is one of the stretch goal on their patreon, so go support them if that is the case :3

It should be, as welp, WOTB tweeted that it is not coming on the currently latest Sho update, so it should be this one.

True, but I kinda like the direction of style the artist is going with :3

I think it will be muuuch later than that.

That is just my speculation, because I didn't know if 0.26 will bring two cutscene at once.

He does, but not really frequently.

Although that kinda contradicts what WOTB said tho.

He said it is not coming in the next update.

But well, I guess it is either this or the next Shoichi update.

I see what ya did at there.

Is it because he looks like he was about to cry?

The screen cuts to the day transition screen if you haven't fill a character's heart bar before CS 10 ends.

Except that there is only the animation of sakura falling from the tree. No days that tells you when does this happens.

Then, the screen fades to black.

There, we can see that the day of MC's graduation have arrived.

And then despites his effort, he is unable to win the All-Japan Junior Tournament again.

But, despite the setback from the tournament, he still decided to go forward to being a professional tennis player.

Two weeks after his graduation, he officially announce his debut into the world of professional tennis.

One week after that, he moved to U.S where he will be living from now on.

And then he mentioned about other's life.

Jun managed to graduate the school and got accepted to a music school he want to go in Germany. And at there, he is studying to became a game composer.

Shoichi graduated the school with honor, and got accepted into a prestigious college in Tokyo. Due to their busy work schedule, they haven't really met up as frequent as before, but they are still close together as a friend.

Saya came with MC to the U.S where he share a room with her. Although to MC's opinion, she's difficult to live with, but still, he is glad that he's not completely alone in U.S.

Keisuke is now the captain of the tennis club of the school, and his father makes him agrees that if he does not win All-Japan Junior, he is going to be forced to quit tennis and inherit his father's company.

Aki has been working harder ever since MC is gone. And he decided that he will take care of both his school work and his mom at the same time.

In the end, MC said from his own perspective that his dream finally come truth, however, he feels like it is emptier than he imagined it would be. Although he love that fact that he did it, but at the same time, he expected more out of it. He feels like the problem of it is because he still have some regrets. And what he regrets the most is that he doesn't properly enjoying the last year of his student life. He thinks that perhaps if he'd been more decisive about what he wanted, things could've turned out differently.  However, he said that "indecision has always been one of my traits."

In the end, he talks about there's not much point in lamenting about what could've been in the past. And now, he is responsible for his own future. And there's no room for mistakes now for him.

Check out the teaser posted by Nyaruh (the game's artist) in the Twitter! 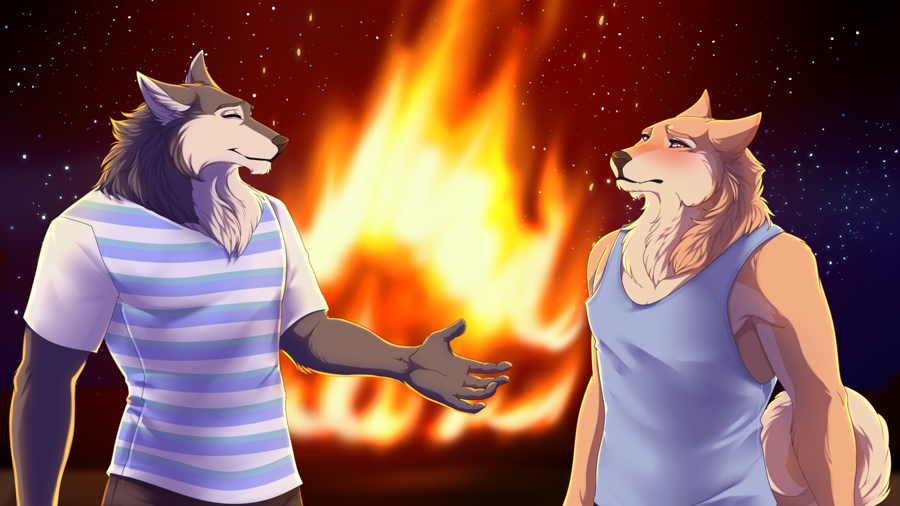 True, but, well, at least we know what Sho/Jun/Keisuke "future" looks like...(?)

(Tbh, it is kinda sad seeing MC being regretful of not spending more time with each other during his last year of high school)

Ah, you mean when you didn't choose a character route in time during CS?

Bugs, you can report it in the error log :P

Yep, new change, as he was supposed to be naked in that scene.

Um, then it is suppose to happen :3

If so, this is a continuous error.

And well, because I kinda reverse-engineered the game a little bit.

And if you want to know how, no, I can't do that, since well...this kind of stuff is looked down upon for the developer.

Yep, I think it is a reference to Dyne Wolf.

And the "American RPG" keychain's characters is basically characters from Wolfstar Sins and Paradise.

And well, needless to say, it kinda hurt my heart as a whole.

But I didn't regret reading it though :P

Didn't he sign up for vocal lessons at his local music school? I think that is the reason that his work are being delayed.

Or is there something that I am missing?

But anyway, wait patiently for him, and he deserved some rest too :3

So the next update is going to be about Sho.

There is going to be more of our best boi in next (not this month) update.

Yep, would be fun to see him getting a route in the near future :3

I found out a lot of grammatical mistake in my post after you posted this, lol.

> How does Patreon work? How do I find something there?

To answer your question, it is a site that allows you to support the creator by donating your money to them.

And oh well, here is his patreon :P

After that, you will need to click on the button that says "Become a patron."

Then, select a tier or make a custom pledge .(depending on how much you want to pay monthly)

Enter your credit card info and you should be good to go!

Just a reminder though, you might want to wait until April 1st, because of the way how patreon works.

> You seem to know alot. I guess you are much longer member here than I am. And you aren't American or Britain either, right?

True, and I am surprised that you somehow know that I am not American nor Britian 👀

> By the way WOTB are you Japanese? Not that it would change anything 😄 Instead I would be even more hyped since this story turned out incredibly well and is happening in Japan. This culture and the people aroused my interest.

Though I am not WOTB, but I can answer this question. Surprisingly, he is a Brazilian :P

> If not there must be a reason that the characters are Japanese, right? Is it because of Mangas and Anime and stuff like that? It fits good I must say...

Take it with a benefit of doubt, since I kinda...forget about it. But WOTB mentioned something about this VN came from the inspiration of Japan's sport manga, so you are right on that one.

> Here is another question. Do you plan to write more VNs? The least I want is pushing you. It's just a humble question. 😌

I think he said it in his twitter that he wants to work on more project in the future. But...still, I am not sure about that one.

Oh and if you want to know more about him, check out this interview:

A: Spent less time together, but still as a couple.

B: One person gave up their plan and then stay together with the other one.

C: Or somehow found a way to stay together without interfering their life plan.