Hey! Actually there were but they got corrupted due to an issue. I'm still trying to recreate them now. originally, there's gonna be an update to this game. I originally wanted to do a sequel to it, but I may transform this game as a whole if I find the time. Although I'm gonna leave the original game avalable as a download if I did make major changes to it though. So stay tuned for that! All I can say is that it's gonna be more mystery focused and maybe even a bit spooky too. So hey, If that sounds fun to you, then stick around! :D

Also sorry for the late reply.

Hope it does work for you now ^^

Ok it was a mistake on my end. Ive changed the name of the Twitter account. now it should work if you type it in.

If you look at the post it note you’ll find it when visiting the link written on it.

I inderstand that. Maybe if I’ll figure out how to make something that is exactly like what the game talks about i’ll include it

I think there are only 6 if i remember correctly.

That is certainly unusual. I don‘t know if its a bug but thats not supposed to happen. Maybe save your saves folder and make a backup?

Could you give me that zip? I‘m afraid that i‘m going to have trouble with it otherwise.

No, that's strange. Have you looked around the Control Room yet? What number are you missing?

Thank you for your patience!

Ok. I've updated it, now it should work. If it still doesn't, please let me know.

Ok. I've updated it, now it should work. If it still doesn't, please let me know.

That sounds like a big issue. I’ll look over it but I can’t promise that it’ll work. I don’t have a mac myself and i’m not too familiar with the software.

Thank you! I’m glad you are enjoying it!

It can be found in the Spectra Folder that came with the download. the one where you start the game from.

You must be very lucky! 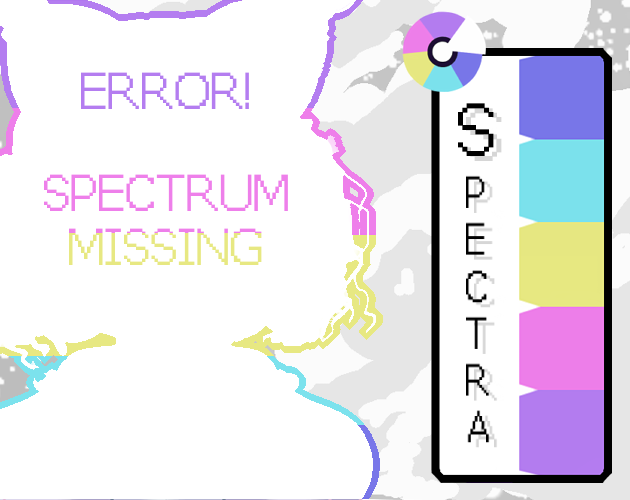 If you are a fan of Visual Novels, you'll probably enjoy this short adventure!

But Spectra isn't just a Visual Novel. You are on a mission to fix the biggest problem within this weird dimension that we call our home. Don't worry though, I'll be here to help you during your journey. So there's no need to feel intimidated!

a unique cast of characters

a lot of choices

many secrets both inside and outside of the program

a big mystery to uncover

I'll be waiting for you on the other side~

Also, If you have any feedback, feel free to share it with me!

I'd love to hear you guys's opinion!