Yes, whoops sorry I realized that later, my connection was so bad that pages were appearing to load fully but actually just, not.

It'd be nice to have a screenshot or two when deciding whether to buy it...

There's not much that's helpful about what you're doing either...

I've played this twice now and while I think I've reached the end of its replayability potential, it was a lot of fun while it lasted.  I love the personalities all these characters had. Little Timmy was sooo precious, I adore him. The X-Files references made me laugh as did the time the imp showed up dressed like an angel. The music is very chill and relaxing to just let run in the background as well.

I might give this another go as an evil ruler, that seems like it would be fun after a few hours being  such a force of sweetness and light...but I'm not sure how viable that would be as a serious play through, seems like a quick way to run the kingdom into the ground more than anything.

Is there anything that can be done about the kraken? I really hated that guy. The mimic was annoying too. We took out a dragon, surely my heroes can get rid of a wooden box with teeth. Heck a handful of termites ought to do the trick.

This reminded me of a game on Steam called Reigns, but Sort the Court has so much more charm and is is delightfully wholesome and family friendly. I'm recommending it to a few people I know with kids.

Great job with this, guys! 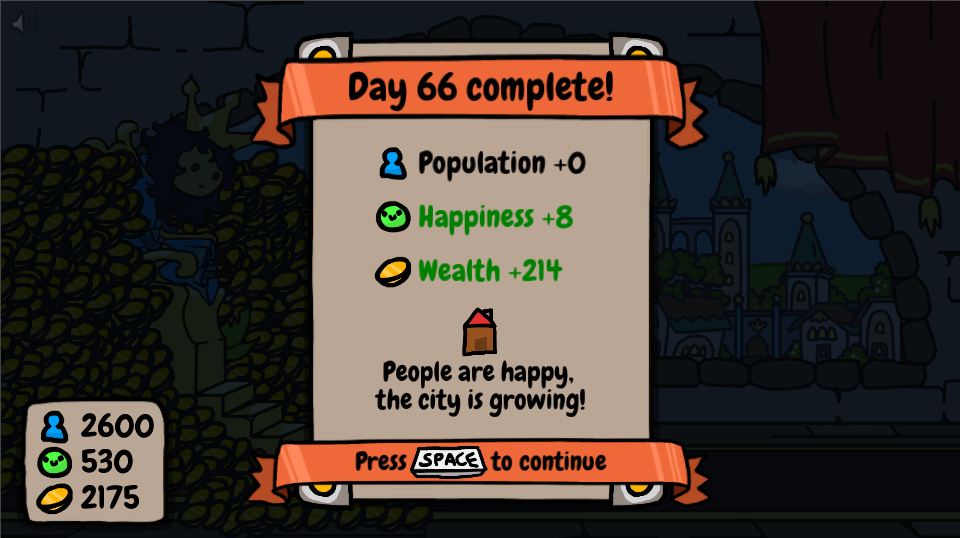 I do have to say though that my Queen's slouch is appalling. I kept wanting to make her sit up straight, that looks like a painful way to spend all day and all night...

Very cool game. The sound and the art just made for such an intense experience . The hunting just by itself was very satisfying as a game mechanic, I'd love to play a wilderness survival  game with this spear mechanic. And the fires added a whole new level of danger to everything, especially since it took a bit for me to realize I could put them out. Really nice exercise in minimalist/non existent storytelling here, this will really stick with me despite not having any kind of plot in the classic sense.

Reply
Sort the Court! community · Posted in On what day did you get acepted into the council
Civette2 years ago (1 edit)

This is my first time playing, but I think it was day 55 or so? I saved not long after and I'm on day 59 now anyhow.

I've had what seems like very good luck with the wizard though. I don't know how often bad luck is expected with him, but I've only had a spell go wrong once out of many many times.