The Devil's Calculator community · Posted in Where is the graph function?
Cinq-Mars Media270 days ago

Hi there! The graph button shows up once you have two or more calculations in your history, otherwise the levels button is shown. Thanks for playing!

Copy Editor is  a non-profit, intricate puzzle game that teaches you Regular Expressions (RegEx), commonly used in computer science and language theory. Build complex rules that process and revise famous texts for your wacky and demanding publishers! This is a preview of the version to be released in early access soon.

With Chameleon you can stream your favorite movies & tv shows (along with twitch, YouTube and pretty much any other content), transparently atop your desktop. This way you can work on your computer but also watch films, shows, lessons, etc... all while having your full computer screen to work with!

Services supported included but are not limited to:

Named one of the 10 best indie games of 2019 by PAX, The Devil's Calculator is a non-profit, educational maths experience masquerading as a casual puzzle game. The project is available now on Itch.io, featuring levels by some of the world's leading mathematicians including bestselling author and Guardian puzzle editor Alex Bellos, Grant Sanderson of the highly popular 3Blue1Brown YouTube channel, Numberphile's James Grimeand many others. The game was named a fan favorite of GDWC,  is a shortlisted for a TIGA award and was celebrated at the MOVES conference by the National Museum of Mathematics in New York City.

An evil calculator has its normal arithmetic operators replaced with sadistically obscure functions. Based on machine learning concepts, players interpolate these functions  using sophisticated logic and reverse engineering. Rather than the typical scenario of "solving for X" in algebra, the operators themselves are a mystery. To calculate your perpetual goal of 666, you must strategically collect data and recognize patterns in the output of the calculator. Advanced graphing mechanics and deep integration with professional tools such as Wolfram and Weka help you in your journey and make the experience accessible, not mathematically erudite. 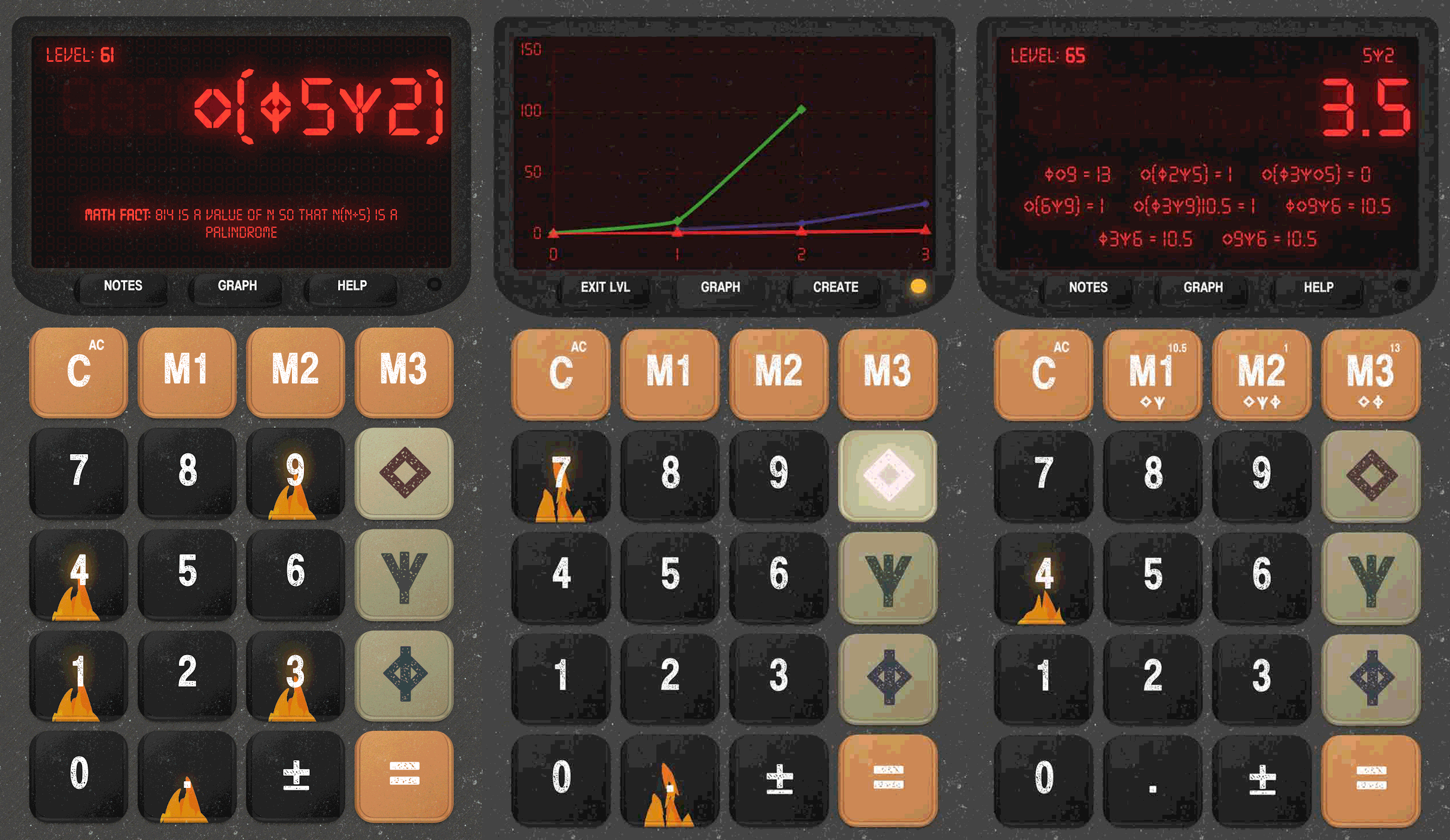 The project arose from our non-profit's mission to undermine the stigma that educational gaming is banal--to make a maths puzzle experience every bit as entertaining as contemporary video games, but with real scholastic merit. The biggest obstacle to this was designing mechanics and puzzles that weren't didactic, attempting to stay out of the player's way and provide them a sandbox with no lose state where they could gather data at their own pace and make rewarding inferences for themselves. A great example was at PAX this past August, where a ten-year-old girl yet to take algebra 1 sat and played the game for two hours, stubbornly working out mathematical precepts no one expected her to grasp. Getting further than most adults, she taught herself the very concept of a binary number system on graph paper, and then scratched over all her work, destroying it so no one else there could stand on her shoulders. With a discipline as rigid and scholarly as mathematics, designing for and encouraging this kind of ingenuity was our greatest challenge and our largest point of pride. Modeled after machine learning concepts, the game necessitates collecting data points and then interpolating a mystery function, similar to curve fitting or performing multiple regressions. Originally designed to gamify this aspect of machine learning, The Devil’s Calculator supports the use of advanced tools like Wolfram, Weka and Pandas to run elaborate analysis of your dataset, although none of this is required save for some of the more erudite DLC levels. In fact, we believe the most remarkable accomplishment of the game is its accessibility regardless of a player’s maths education. While it may help in certain cases, only a rudimentary understanding of algebra is required to beat the game, as lateral thinking and puzzle solving skills are the focus of our level design.

The game contains a sophisticated level creation system, the same we used to code the main campaign. In it, players are able to program their own levels, from concepts as complex as imaginary numbers to simple expressions, notated with ease using Math.js and its standardized evaluation system. Teachers regularly use the tool to tailor games to their curriculum as it is fully open source, supporting unrestricted customiziation by the community. For advanced level design, including computations a phone or computer would struggle with, we even include support for Wolfram Cloud APIs. Once a level is built, it is immediately accessible to players on all device and is then ranked based on feedback from the community. Our favorites are showcased in a special DLC section of the game along with levels made by some of the world's leading mathematicians. Most of these guest levels relate somehow to their research in the field, with many requiring some investigation into their work in order to solve. This is by design, as cultivating interest and enthusiasm around the subject of maths was one of our principle ambitions. Another was to build an experience that allows anyone, regardless of education or prior exposure to maths, to engage fully with the subject in the context of an entertaining and addicting puzzle.