this was a fun time I love the physics even if a bit clunky. I liked the random items and the levels having this fun simple goal and how to get to said goal. Great Work!

Super excited thanks for the reply!

Hell yeah so dang excited and can't wait to get the full shoe on both feet and do some kicking of skulls in!!! could you please make a Mac version of the full game please I have been following development and I really would be quite cross if the game only comes out on windows and then can't play the game.

3 press enter and open the file

3 press enter and open the file

This was the best update I have been following from the start and this is really starting to take an amazing path of potential. This was really great super excited to play the game more and might even make a fan poster. I think this is really cool, and I love how much the style is being matched. I think level design-wise Phil might structure the levels differently.  It is amazing to think ten years like it still feels so recent to me. I think the controls are a bit clunky, but it still does what is needed to do inputs. some of the puzzle structures and level structure are confusing, but overall this is an amazing prototype that I assume didn't take 7 years to make. ( joking)

This is really fun I love the flip how each round has you getting downgrades but they can sometimes help you in the long run. I had around where I had a bright green on pink and then the next round got a "powerup" where I was able to flip that black and white. really cool idea I am super inspired now to go make a game. 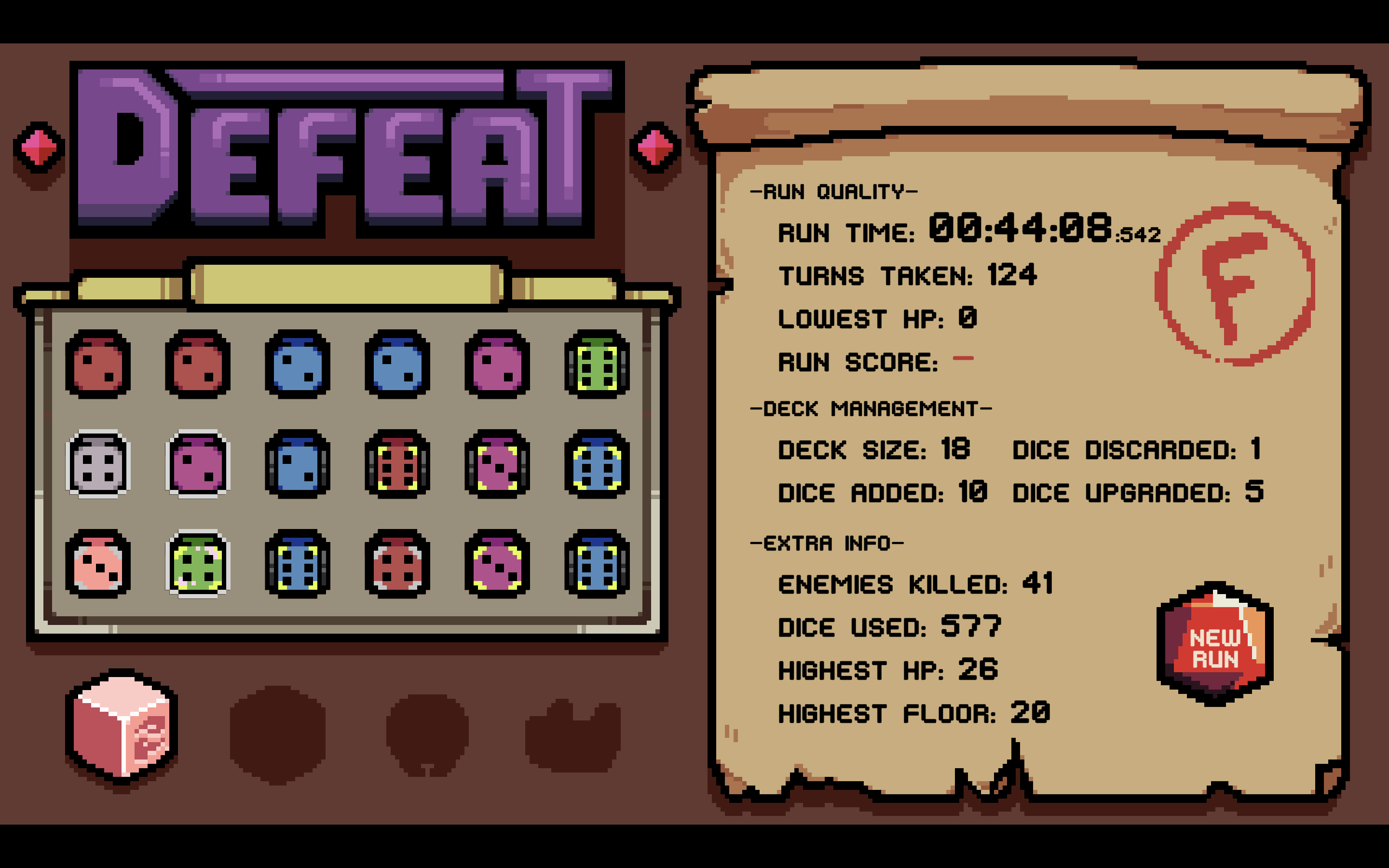 so close the Queen was at 35HP 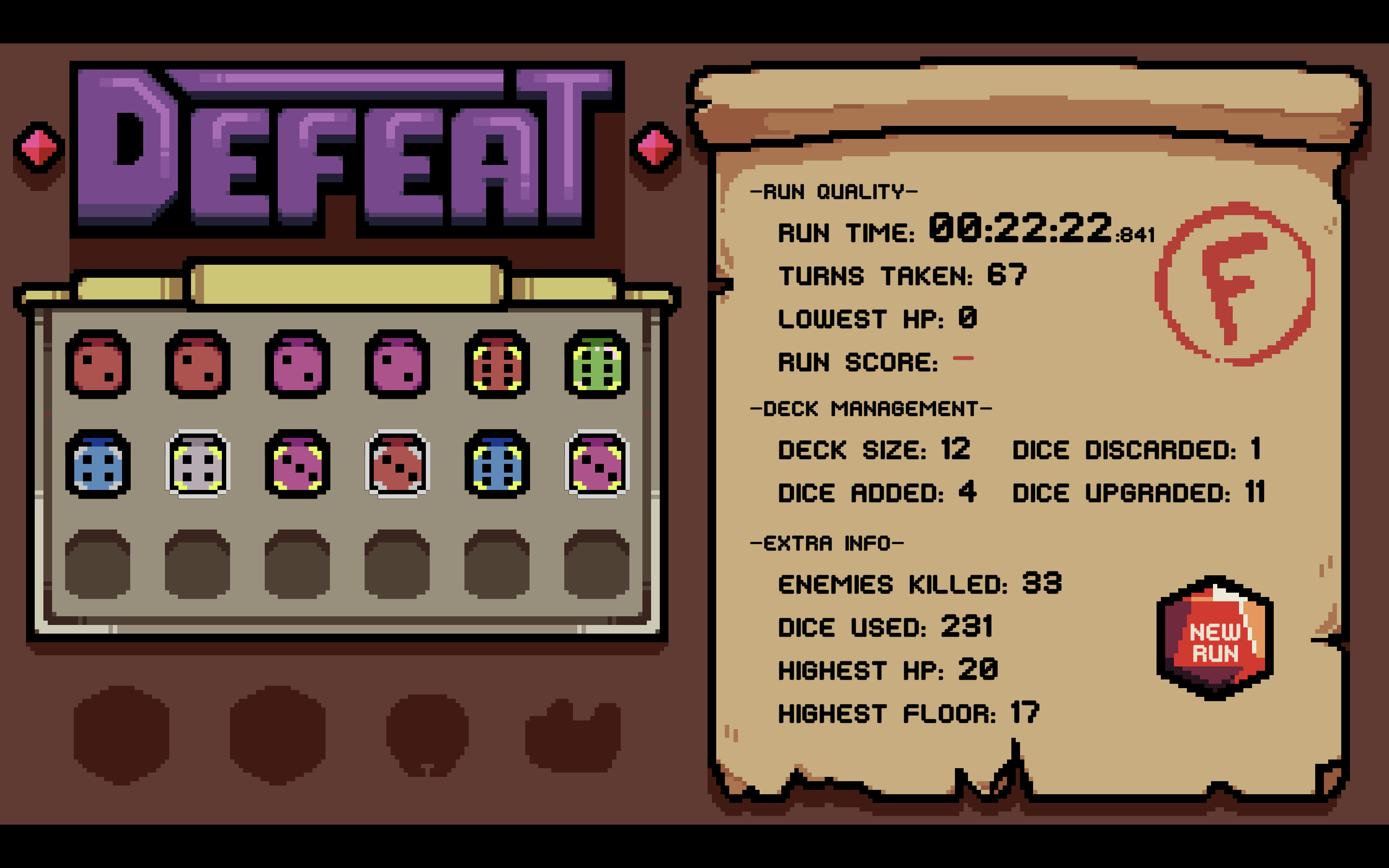 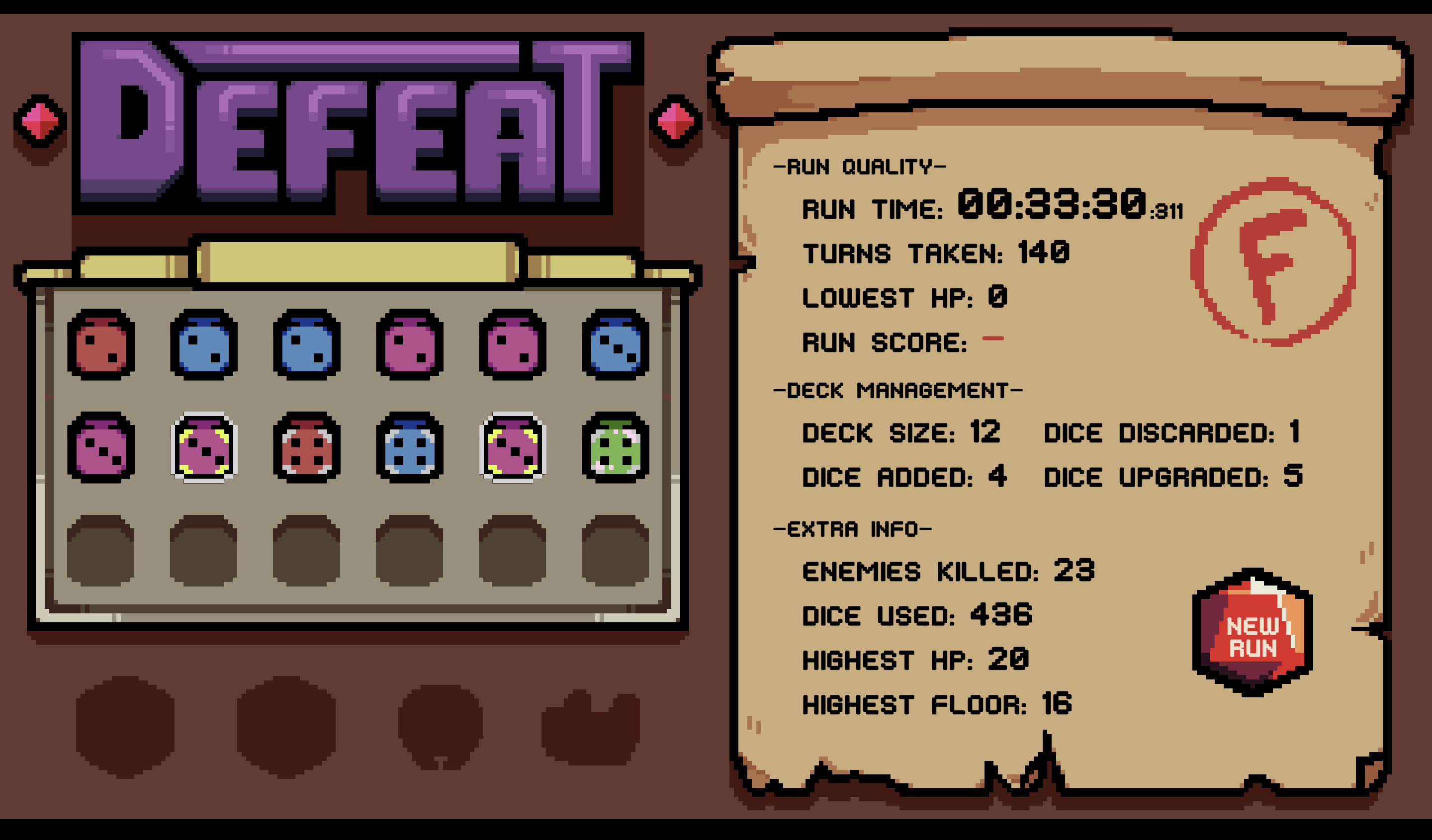 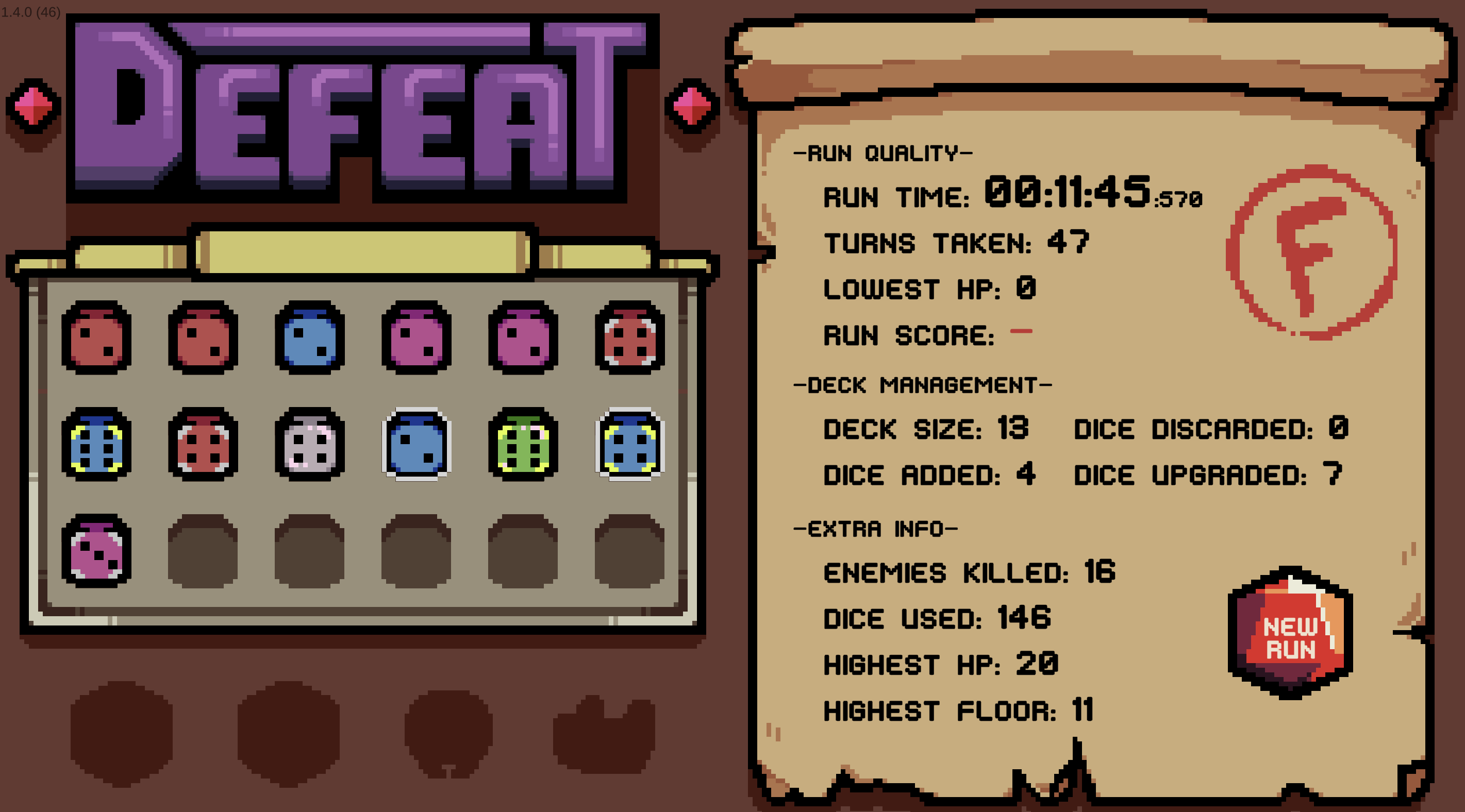 I like the esthetic of the game and the gameplay is enjoyable but it is still just brutal and in a way that isn't enjoyable. I still feel like I can never get that far because of the upgrades just not being much of an extra punch. I think that giving a bit of healing at the end o each round having the player get new dice would make the game have a more functional difficulty curve. - but maybe I am just missing a large part of the game

I like the esthetic of the game and the gameplay is enjoyable but it is still just brutal and in a way that isn't enjoyable. I still feel like I can never get that far because of the upgrades just not being much of an extra punch. I think that giving a bit of healing at the end o each round having the player get new dice would make the game have a more functional difficulty curve.

The game is still a bit hard and the difficulty curve hits hard fast. I wish the upgrades were a bit more interesting and useful like I sometimes just feel I am not getting better dice. I keep getting one-shotted because I didn't have a chance to get better dice. The game has a great style and is fun but just needs some balance I feel.

Ooooow a good image of Foot kicking a sucker up wall holding another against the wall with a plunger in his mouth. Or a worm's eye view of Foot jumping onto a pile of tentacles and snakes or the fish guys. Or lastly, Foot cross-legged cleaning a jammed gun the has blood in it and is pulling guts out and putting them into an alligator's mouth next to him the alligator is dead as well. Also, I call the main character Foot. Thanks for the question!!!

This is the best version yet I was up at 1 am playing after I finished my finals and thought I should probably sleep. The collisions are a bit buggy got stuck in one part as a speaker got stuck in a door guns through walls all that stuff. Sometimes the enemies would shoot two shots at a time, and sometimes lead to "that's ehhh ok I guess next run?" Love the new designs I am thinking of doing a fan art poster for my room or finding one online to print. Super fun and this is the only game I pay attention to besides Minecraft and am more excited about this game, to be honest. Hope you are all well and putting on some nice shoes and kicking back a couple of drinks and just kicking some vibes if not then you do you.

all of your games remind me of JW and Vlambeer's old prototypes fantastic job love your style. If you're ever interested I am a game developer too and would love to collaborate

it's simple and cute I would love more and for the animation and other maps and new enemies+cards in a full version.

These look fantastic Donny thanks for putting these up!!!

It was simple and to the point I really liked the feeling of being like "oh shit that old guy with the paper or oh the lighter!" The feeling of discovery and earned discovery too not the "Goddammit finally UUUUGGG! feeling" cuz that sucks.

I love the game so far but I keep crashing fully on Steam, Mac version and the game has the correct game sounds. Meaning I can hear that I can move swing a sword but the image is stagnated. Not mad or like I want a refund just wanted to share that and see if I am not alone.  But I was so hyped for this game and booted up my computer saw that it's out and was like hell yes!!!

I now refunded the steam one and tried the itch still the same problem so don't know what the deal is but still, the game is fun up to the crash. oh, the crash is on sewers 4.

This is my favorite game of yours so far and it's super good!!!

there is code that you can input into the terminal that can open any file without an apple developer account https://www.youtube.com/watch?v=NJC3xz-MPq4

(mac version) I had the game on the lowest setting and at a couple of points I thought does the game have slow-mo now? but it was just the frames dropping fast. I had a lot of guns and enemies get stuck in walls and doors. I shot the Granade happy enemies with a shotgun in front of their face and it didn't kill them. Doors sometimes just don't break by kicking them. The difficulty was fantastic this time around and I had fun the entire time and was not frustrated at the later levels. I liked the improved lighting and the art is getting better and better each time.

(suggestions) I would love to see gun twirling animations for picking up guns or even shooting. Like when you pick up the shotgun you toss it up in the air and catch it. With the uzi pickup, you can have a gun twirl and shoot when you pick it up and start shooting. The pistol you could spin on your finger like a basketball. ooooh, and with the red bomb heads, it would be cool if you could pick them up and throw them. Also, an enemy idea a small pug with headphones that scream alerting enemies where the player is. This pug could maybe kick grenades and takes guns off the ground, then hides them. maybe even takes them from the player and runs with them.

agreed it's almost like what Hello Neibor planned to do but did soooooo welllllll (sarcasm) but yeah that should be fixed or be able to kick couches or vault over them.

I feel like maybe having the riot shield enemies in Narcotomi tower could be staggered by shotgun shots and maybe have less Accuracy. I had to put down the game at that point because I was frustrated in not the "that's hard and god I gotta play again." more this is too hard WTF. I love all of the other parts up to that section but I will try again later. Good job loving the game and how many new simple but very hard changes to make in 3D game development have been made. (This game makes me proud to be a game designer and happy when a new update comes out.)

I mean you have a great base here but the game feel needs some work like screen shake, more punch to the sword swing, and just a lil juice to the controls. But Again this is a great base just could use a lil work

I haven't fucked the shart yet I just fucked the dog and the bee person then went to the basement to use the torcher thing. Couldn't do that then tried to fuck other stuff. Wait so is it fuck the bee, then the dog then the chair then the shark?

I can't figure out who I have to fuck!!! I am stuck on the Shark person and Demon person is their lubricant or something I need to use? Cuz so far this is the best I just want to get fucked game I have played. Reminds me of the sex games on Newgrounds but one that I actually like. The art goes against the tone of the game and it's amazing.

From a Queer romantic only this is cute and totally valid feeling. I Wake up many days and just want to be slammed against a wall and be kissed and touched!!!

This game is very interesting with the amount of simple but very compelling actions that can be made. I only played for about seven minutes and didn't notice any bugs or anything. Great job keep making cool games!!!

This game was really cool spin on the miner/resource games. I like the structure of the game and the way you used the kit.  Great job keep making cool games!!!

This is simple and cool, not really my kinda thing but still well-executed and good. I think the hardest part was the controls I would say try to use one key. Try making a game that is fun with just one key like a platformer with just one key or a fishing game with one key but each press is a different game in itself. Still a very good game great job keep making cool games!!!

This was great loved how the game went from pretty easy to ramp up at the end. The calm nature was also really enjoyable for a morning snowy playthrough. Great job keep making games!!!

No problem I make games as well, that feeling of I  don't want to bust out the code is real. Well, you now know that next time working on item management so don't worry.

I think this game is good too, the biggest issue I had was the ammo and health drops. Some runs I had way too much other times I killed all the enemies and never got any ammo. The system in Nuclear Throne is based on the percentage of the player's health and ammo in relation to the items around. I don't use Pico8 but I think you could cheat the system and next time make a fake system that could act like the Vlambeer Original. But overall this is a very dedicated and interesting build. Good Job!!!