You Are A Volcano
A solo world-building and storytelling RPG where you are literally a volcano.
balou85
The Artifact
A solo cosmic horror RPG written for the Wretched & Alone game jam
balou85

Thanks for sharing this! I love how your story turned out, and especially the characterization you gave to your curator and some of the sound editing you did.

"You Are A Volcano" is now live!

My first idea was to just write twice as many prompts, but it might be more interesting to have you read the same prompts and think about how you might foil those tactics on the second time around.

So, I've already submitted "The Artifact" which stays fairly close to the original Wretched & Alone template, with one little twist around using a joker to extend the story.  After reading through some of the other posts in this thread, I've got a few more ideas, and I think I'd like to develop at least one more of them before the time runs down on this game jam. They all play with the rules/idea of the game in different ways.

1. Hunter/Hunted - The idea behind this game is to have you switch perspectives halfway through. You start as an assassin stalking your target, and when you inevitably fail, the assassin's guild sends someone after you, and you basically play the game again, but this time you are the one fleeing from the assassins.

2. I don't have a good name for this one yet, but it plays with the idea of the unreliable narrator.  Here's the overview: you are investigating a conspiracy theory, and it is much easier to win the game than usual. However, when you get to the end and "win", you discover that the conspiracy you have been obsessing over is invented and not true at all.

3. You Are A Volcano - In this game, you are literally a volcano. You recently emerged from beneath the ocean to form a volcanic island, and some people have settled on you. Each "day" is about 100 years, and for each day you would draw one card of each suit, representing things like cultural developments, technological developments, weather/climate/geological patterns, threats to society, etc. and describe how the society that has settled on you deals with/incorporates those four things. Your goal, as the volcano, is to find a way to relieve the pressure that is building up in you before you explode and wipe out this little civilization. The tower would represent catastrophic eruption, not sure about the Kings yet - maybe they abandon the island? I'm thinking about ways to make the pulls from the tower work in this situation, and maybe make it a bit more winnable? Or, like the Downfall RPG, maybe the point is to build the society before destroying it?

I'm really leaning towards doing the Volcano one. That seems like a fun challenge to me,

I love this question, and started to write out an answer before realizing that there were several contingencies to talk about. For example:

-When do you draw the salvation/savior/Ace of Hearts card? Or do you start with it on top of the deck?

-Are you including mechanics like the Ace of Spades (put the King of Spaces back in the deck) or the Ace of Diamonds (remove a token on a 5 or 6) like in The Wretched itself, or are you just following the Wretched & Alone SRD?

-How many pulls do you have written into your game? How many pulls are you assuming will cause the tower to fall down? In a different thread, Sealed Library mentioned that they designed around ~30 pulls ending the game, so I used that as my default here.

I puzzled about ways to write an answer including all of that info, and then decided that it would be way better to have a computer do the hard work for me. So, I wrote a computer simulation to allow the user to manipulate all of the relevant variables, ran it for many, many simulations with various different settings, and came up with a few fascinating take-aways.

Before I get to any of that stuff, you can find the model, and instructions on how to run it here: https://github.com/brismithSFHS/Wretched_Alone_NetLogo    Please feel free to use/manipulate this model however you would like.

Ok, now on to the lessons learned.

The rules-as-written make the game BRUTALLY hard to win, verging on impossibility. Check out this screenshot of one of my model runs: 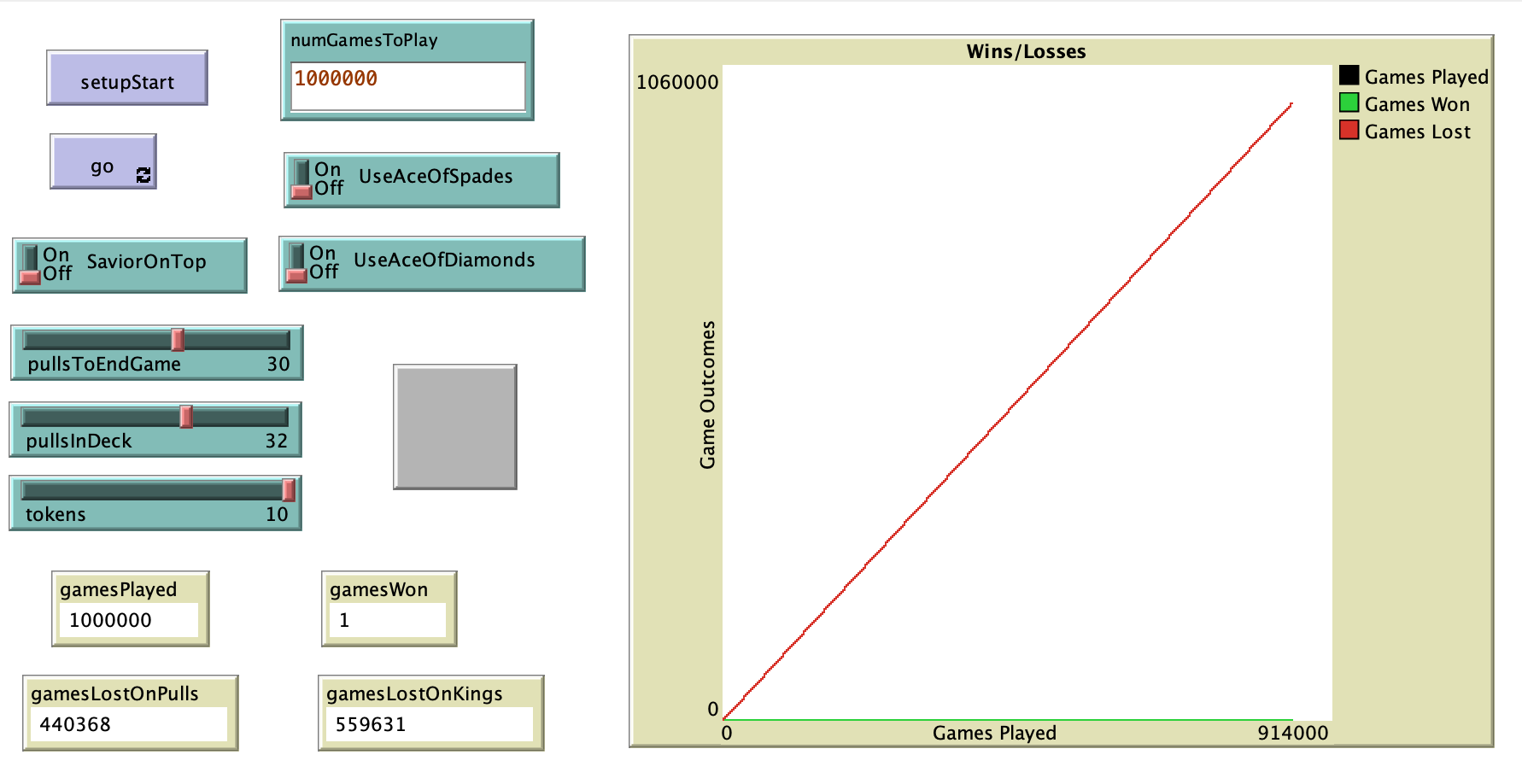 Let me explain what I modeled here. The savior (Ace of Hearts) is NOT on top of the deck, and we're NOT using the Ace of Spades or Ace of Diamonds mechanics from The Wretched. Also, just like in The Wretched, there are 32 cards asking you to pull from the tower, 10 tokens placed on the Ace of Hearts, and we're assuming that 30 pulls from the tower will cause the tower to crash.

I ran this simulation for 1 million games. Exactly 1 of them produced a win condition. I was floored. I knew this thing was hard to win - didn't know it was THAT hard.

So, let's try to get it closer to the 50-50 win condition you originally asked about.

I tried turning on the savior- putting that card at the top of the deck. That resulted in 3 wins out of 1 million games. Not a huge improvement.

Next, I put the savior on top of the deck, and turned on the Ace of Spades and Ace of Diamonds mechanics. That got me to 288 games won out of 1 million, or about 0.03% win rate.

The tokens are clearly the most limiting factor here, so I went after them next.

With the savior mixed in the deck, both ace effects off, and 5 tokens, I got a win rate of about 0.5%

With the savior on top of the deck and both other ace effects turned on, 5 tokens yielded a win rate of about 10%.

Ok, when do we actually get to something approaching 50-50? Well, it turns out... 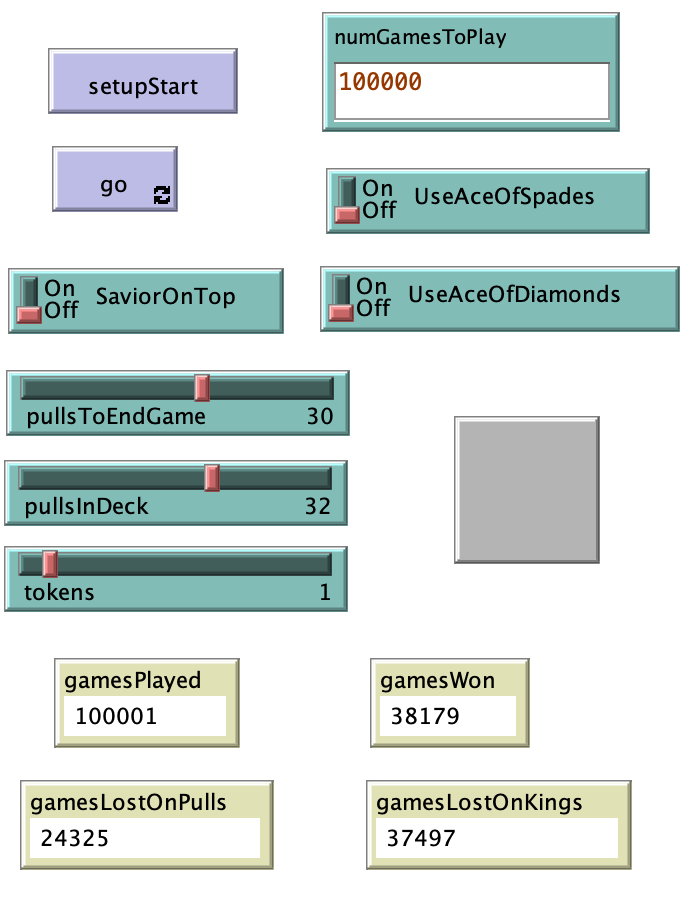 If you shuffle the savior into the deck and don't include any of the other ace effects, 1 token STILL only gets you about a 40% win probability. Having 2 tokens cuts the win percentage down to about 16.5%.

If you shuffle in the savior, but include both of the ace effects, with 1 token I got about a 46% success rate. 2 tokens took this one down to about 27% win rate.

In terms of stacking the deck, if you put the savior on top, don't use the ace effects, and use only 2 tokens, you get roughly a 49% win rate. This is the closest that I was able to get to 50-50.

Savior on top, both ace effects, and 3 tokens gets you about a 40% win rate. 2 tokens with those settings get you to a 65% success rate.

Anyways, please take a look at the model and mess with any of the settings you would like.

Thanks for a great question, and I hope this helps!