Wow! Thanks! You can send it to alexander.s.shen [at] gmail.com!

That sounds great! Can’t wait to see what you can come with.

Sure! Feel free to translate and share. When it's done, I'd also to add it to this game page as well.

What ultimately got the thing working for me was right clicking on the executable > Show Package Contents > Contents > MacOS > Mac_Runner.

Since then double-clicking the app seems to work ok without the above workaround, but exporting doesn't work (lol). Thus the above way is also the only way when I hit "export" do the .png or .gif sprite sheets actually save. Perhaps a weird permissions thing I don't understand?

I'm not sure. Tiny spider things probably? They look like candies to me, actually.

Cute! Really nailed the GB vibe and tone. World is surprisingly fleshed out with fun tidbits here and there.

Awesome! Does "near other waves" mean within 1 square?

When I was typing it out I almost typed "Happy Tree Friends" as well. It's my homage / museum to Animal Crossing. The only other series that has that has left that kind of impression on me are the first 4 Layton games.

I really like what you did here. One of the ideas I always play around with is the idea of a digital museum one can walk through. I tried to do that with "Happy  Friends Museum" and would like to revisit the idea again.

I am flesh destined for the grave. Never a truer fortune been told!

Definitely don't change the 2d6 sum rule based on my feedback. I just misread it. Personally I had a lot more fun the 2nd time through when I was using the sum. Maybe for different tables that can change, but I did enjoy it more when I played it correctly.

On a side note: more please.

Lovely lovely lovely! Really like this and would like to see more tables. Had a few questions about scoring:

Going to be leaving some money right after this comment and trying again at lunch.

We took this camping! Ended up in this situation here. Not sure how to proceed.

Awesome, thanks for the clarifications! So the arrows only apply when placing the card relative to the coin card?

Looks interesting! Thanks for sharing!

2. When you shuffle each stack of 4 cards individually, they get passed to the corresponding player face down?

3. Is a line of cards a straight line or can it bend (i.e. a tic-tac-toe line vs just a sequence of 3/4 like cards connected via arrows)?

4. A "connected card" is defined as a card that is pointing to another? Example: at the end of the round, if I have a card to the left of the anchor with the corner arrows, it is not connected to the anchor because it does not have an arrow pointing to the anchor?

Absolutely love the style and the somewhat looseness to movement actually feels complimentary to the game's fun experience. I really enjoyed it! Thank you for sharing!

I agree with you 100%. I need to properly learn to code AI stuff. Hot seat play is way more interesting. :)

Terrible game is now available for all! Submitted.

Excellent! Can't wait to give it a go. At first I saw the eye as a mustache and thought this is a good Anchorman game -- some Ron on Ron. 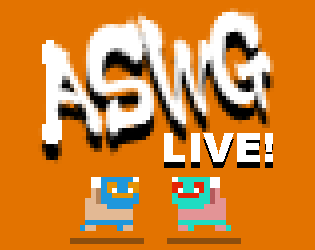 Have some UI polish left and some additional sound FX to put in. CPU is a little tough right now, so will have to dumb it down a little bit in terms of the mini-game. There's also a weird split-second bug that happens from the lunging animation and initiating the mini-game. Other than that, I think I'm about done!

Oh, and some option menu stuff (SFX, show WASD instead of Arrows for Player 1). Also plan on doing a small instruction booklet PDF in the size and style of old Famicom games.

I'm a big fan of professional wrestling, warts and all. Decided it would be fun to distill some of the action down to this 64 x 64 game jam.

The game play is pretty simple:

Players move left or right in the ring. If they collide, a mini-game where the players have to enter a 4-key combination appears at the top of the screen. The first wrestler to do that scores the hit. Wrestlers may also lunge to gain a free hit, but are only allowed to do 4 per match. Wrestlers may also time a counter to the lunge, but timing is difficult and missing the counter doubles the damage done to you.