How can I know the nutrition and moisture of an area? I don't know where the best spots to put my fungols are.

While I was figuring out the controls, I put my grab tool in a chest. Am I supposed to be able to do that? Is there a way I can get it out even though I can't open the chest?

I was running from an Ubuntu-based distro (Linux Mint) and I had this problem. My workaround was just downloading the browser version. Someone in the comments below linked the downloads to libcrypto and libssl but it told me I had the wrong ELFCLASS still.

Thanks a lot! I still wasn't able to get the game to run on 64 or 32 bit, but it's working a bit better. The game launches now, but it  crashes immediately. I guess I can play the browser verison.

Fun game. I'm excited to see the final product! It's a lot like Absolute Drift, but less minimalist.

Does not seem to work with Linux :( I just get a blank screen

Well-rounded. It's got everything - GUI, sound, music, title/game over screen, etc. Good job!

The timer above the head is a cool mechanic. Did you make the graphics yourself?

I like how you've commented on pretty much every game in this jam. Pretty cool.

The game looks very professional and is a lot of fun. It would be more interesting if there were more than two different towers.

Pretty and fun, but I think the game could benefit from some music.

I now have a life counter, a title screen, and a reset screen. Having the game run in the background is classy, but unfortunately, when you click "play the boxes stay in the background and lose you lives. I couldn't figure out how to fix that.

I've added some simple sound effects to the game. I don't think I have the time to add anything else in the last few hours before submissions close. So I didn't get to add gimmicky cubes or colors or anything like that but I'm still proud of the results.  Good luck gamedevs!

I now have a score counter and a thing catcher!

Programming the score counter was actually really hard. Yikes. I'd refactor my code if the game jam didn't end in 3 days.

TODO: add a life counter, then a title screen. Then I'll try to make scaling difficulty.

I haven't done much work on this game because it was finals week and I was very busy. In the little time I had to work on my project it was just figuring out how to use Godot. So here is an update.

I think the next thing I will do is make them drop when you click on them. Godot has been kind of difficult to use sometimes.  Godot feels more polished than Unity but I don't like the workflow as much. I guess I'll try using it more, then I can decide which one I like more.

Now the boxes come from the shooter and you can click them to make them drop.

Next up will be adding the little thing at the bottom that you are trying to drop the boxes into. Maybe move some things around.

Pwap is the working title. I couldn't think of anything better.

My original plan was to make a furry clone of Wii Sports Resort Swordplay using MonoGame, but I realised that it was too ambitious, considering I had never used MonoGame before. I'm using Godot (which I've never used either) instead, because MonoGame can't make web games.

So far my idea is a clicker game where there is a shooty thing that launches squares. Then you need to click them while they are above a box, which stops them in the air and drops them down. It doesn't make much sense. I have a drawing!

So the idea is that you would click the square, while it is in the red zone, and then it would fall into the little box ┗┛ thing at the bottom. The shooter would then shoot more and more boxes, faster and faster, until you fail to drop the square into the box. 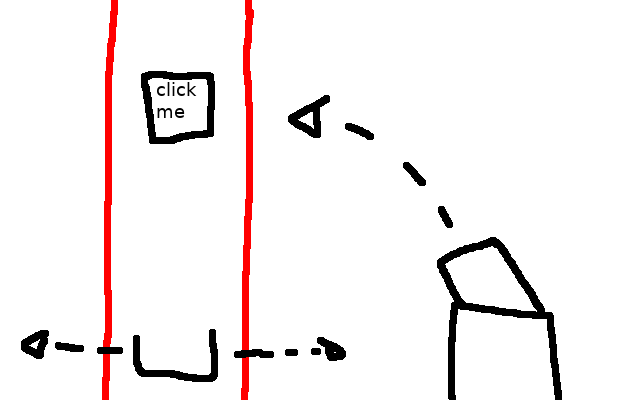 Hopefully I can get some physics in that as well, that would make it pretty polished. Maybe I could add some gimmicky squares that have reversed gravity, or squares you aren't supposed to click!

It works now. Thanks a ton!

The Linux version boots to "made with Unity" and then a grey screen since the update. Is it similar to the Windows sitch where I just need to rename something? Thank you.

Outworlder was made with Unity, if that's what you mean.