Happy to hear you enjoyed it :)

Thanks for your feedback, we'll try to do better in the future with regards to accessibility :)

Could you let me know which platform you played on and which build you downloaded? Sounds like it might've been an issue with saving the game.

Hi, the settings panel should've been accessible in the main menu from the start which is really weird. Was the button not responding for you?

Thanks for the kind words :)

That's also an important point - based on whether the game is in portrait mode (phones) or landscape (PC / tablets / consoles) we switch up the card orientation from vertical to horizontal in order to make them more legible, and the design had to account for that :)

Yeah, putting a label saying "bonus" on top of the challenge levels might've helped - at the time I was determined to put in as little text as I could (both for localization reasons, as well as making the game more approachable to young kids) but that probably wouldn't have hurt as much.

Thanks! We tried to make the mechanics easily understandable at a glance even for golf newbies like us :)

I'll agree that 5-4 is a bit of a difficulty spike, and we probably should've made the puzzle a bit easier in hindsight. 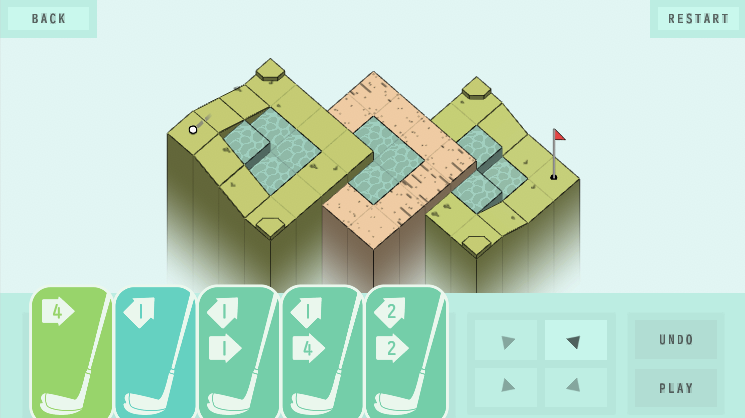 Glad you enjoyed the game, and I hope your stomach gets better soon :)

Happy to hear you enjoyed the game. The Android APK is available for download now :)

Thank you, glad you like the calm nature of the game :)

Thanks for the kind words! If by "wasteful" you mean the pieces being replaced in the box - our head canon is that they're actually being covered up! :)

Hi, this sounds like a really strange bug we haven't seen before. Can you send us a screenshot of how that looks at golf@afterburn.games?

Glad you're enjoying it! :)

Happy to hear you liked inbento :)

Glad you enjoy the game!

A new version is up (v3.36) and hopefully it fixes the issues.

A new version is up (v3.36) and hopefully it fixes the issues.

Hi, I just uploaded a new experimental build for MacOS. Check it out and let me know whether the issue is resolved :)

Hi, I just uploaded a new experimental build for MacOS. Check it out and let me know whether the issue is resolved :)

Hi, the APK is available now :)

Hi, the APK is available now :)

Thanks for noticing that; I initially posted the link to After Midnight by mistake but later corrected the text to inbento without fixing the link.

Unfortunately it's not possible, since the game includes some plugins we can't share.

:D We only found out about Nancy Drew after releasing inbento, but fortunately the mechanics are different enough (at least in our opinion) that both games can stand on their own :)

Thanks, we do love our cats :D

Thank you for the kind words :)

We'd be glad to have https://afterburn.itch.io/golf-peaks included :)

I think that adding it to the collection doesn't add the game to your library; however, you can start a download and cancel it right after that to add it to the library.

If you cannot download it right now, don't worry too much - the game will be free to download past the end of this year :)

This sounds really weird, thanks for the heads up! Are you getting the same error when trying to download using the website?

Thanks, glad you had fun with it :)

Thank you so much, glad you enjoyed the game :)
For now we're discussing potential translations internally, but we'll let you know once we decide on something :)