Oh, this is so exciting! Thank you for updating us~^.^

Again, thank you so so much for making this game. It's still a touching presentation of femininity to me and the healthy relationship dynamic is healing to remember.

Good luck on your main project! I am very eager to see how it turns out!

A late response from a face-less mob fan character, here.

Lovely read. Am heartbroken by the fact that this is a demo, but life goes on, I suppose T_T

All the hints on MC being kinda bird-related have not been missed.

Great fun to read. One cause for confusion... It says "so-and-so's ending unlocked" and I have no idea if that's available yet, since I can't seem to find a way to read said unlocked endings.

MC was delusional, which could have oh so easily turned into an annoyance to the readers... but it was explained so well and made into something so understandable, that it made her seem stronger for it.

There was a sudden tone shift in Cerim's battle with the demon lord because the music changed drastically... But it wasn't jarring. It felt dramatic and well-placed, because of the opening motif. Well done. Also, even more about the climactic scene, Cerim legit was made to seem cool. With Reo narrating WHY Cerim was cool, MC showing such intrigue and Cerim's own poetry making a very bold statement, I was absolutely floored.

I'm so used to shit-post visual novels, or otomes that are a sinful indulgence in chiches and tropes- and this one indulges in tropes and cliches, alright! But it felt like it was done masterfully.

I am so happy that I played this game, I am so excited that I've found something like this.

Thank you so so much for making this game, I had SO much fun, it was unreal. Thank you. I am definitely going to check out the one game of you guys which I haven't checked out yet (Haha, I just realised I'd also played your muder mystery game and "The demon lord is mine")

I hope you have a great day, Anta.

Oh, thank you so so much!!! It's an unexpected but very pleasant surprise that I was responded to.

edit: Yep, I usually respond in around 10 days, just now realise that might have come off as rude, I'm sorry.

On another note, I FINALLY COMPLETED THE WHOLE GAME, WOOOOO, THANK YOU FOR YOUR HELP!!! The sadistic nature of the game, with it not having any saves or rollback, definitely made me hate my life a few times, but that's probably part of why this whole thing felt like I had to complete it XD

Found the game and played it. I still refuse to delete it from my laptop, it is an absolute work of art, I can't forget this XD

I am in desperate need of finding the remaining Achievements.... This is HIGHLY UNLIKELY, but if ANYONE sees this, any time at all, Idc, could be in ten years...

Please tell me how to get the "Meet the demon", "Good ending" and "night saved" achievements.

Haha, looks like we're both slow to reply XD And I definitely will wait, 100%!! Good luck~

YOU ARE INCREDIBLE FOR MAKING SO MUCH PROGRESS, AHHH, HOW DO YOU DO IT?!?!

Good luck, dude. I can definitely be patient for something this cool, take your time.

Unlocked all the CGs. If only we got more of a feel for the boys... Anyway, it was definitely nice to always be able to see how a choice affected the affection with a guy. Nice.

Thank you so much!! I'll get right to it!

On the right of your screen, whevever you're on a game page, you will see a bunch of text buttons. Click on "Rate this game" and there you go. 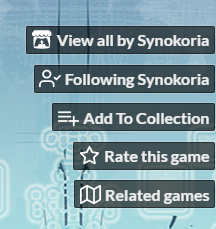 Omg, he was amazing XDXD Am still wishing for Rayner to appear as a love interest some time <3

Have played all routes. Gotten all endings and fallen in love a full four times XDXD Your games are the only ones in which I ALWAYS fall in love with Every Single Bachelor... Thank you.

Am just missing one CG and am getting increasingly frustrated, but hey. At least I made it.

The CG I'm talking about is on the 5th page of the CG screen and the second down on the left collumn... Or the first one on the second row down, I guess XD

W o w . CANNOT WAIT TO PLAY, WHY THE HELL WASN'T I FOLLOWING SO THAT I COULD SEE THE MOMENT THE FULL GAME WAS RELEASED AAHHHH

Thank you so much. I first played the Valentines otome and am looking forward to catch glimpses of that badass MC here, as well as fall in love with a bunch of bois alllll over again. THANK YOU!

No problem! Good luck if you ever revisit them and good luck in your current endeavours!!

Amazing ending, by the way. It's rare they feel satisfying to me, but there was absolutely no problem for me with this one. The intimacy felt special and like we as readers finally got everything this story had been working towards. Thank you, it was wonderful.

Damn, thank you! Will keep all that in mind, have already followed you!

Good luck on the game!! Still waiting and happily so <3 Gives me something to look forward to ^.^

Good luck working on it~ I'm still here and remmeber this game!

Defnititely good luck, I will be happy keeping myself up to date with your released projects ^.^

Edit: Speaking of keeping up to date, any places I can find you guys online? Where should I look for you?

It legit has, thank you again.

This ending is the reason I have trust issues.

This is said with love- Screw you. You made me cry.

I see only one monster in this story and that is the person who made the ending. Pure evil.

XD All in all, good game, had fun trying to figure out alongside Ilona who did it. Am very happy with the experience .

AND YOU'RE SO NICE

Man, I've really struck gold, haven't I? XD Of course, you're welcome, thank you once again for making it!!

"I EARNED THIS DAMN DATE!" Has easily become my favourite quote from a damn visual novel EVER- and as strange as it is to say, this story was deeply touching at moments.

Maybe it's the relatable readiness to give up on everything from the main characters, or Maggie completely winning me over and making me fall in love... But it was something I appreciated beyond "haha, funny depressed gays struggling and NB rep."

All the characters were genuinely memorable for me and that almost NEVER happens- least of all in murder mysteries, because authors just cram in as many red-herrings as possible!

Also, the art was heart-warming to look at because of the colours and (sorry, hope this doesn't seem rude, honestly saying it will all the endearment I have in my heart) rustic feel.

So once again, thank you. Hope you have a lovely week, month, year- whatever XD

edit: OMG, LESBIAN PIRATES AND LUPIN?!?!?! DOES THAT MEAN WE GET MORE GOOSE? OMG, IF THAT HAPPENS, JUST KNOW THAT AT LEAST ONE PERSON IS SO DOWN!!

WHY IS EVERYONE SHOUTING

Oh, thanks for the response! No prob at all, hehe, am just so excited to play!!

Game is on indefinite hiatus.

Guys, let's not keep bothering the creators with the same question, they probably won't want to keep answering it and eventually start ignoring us.

The self-depreciation was relatable and I'd wanna know what makes the character like this, haha. So, cool game.

I read your first short-story visual novel, "the penitent" and I must say, I am absolutely DELIGHTED to hear you're making the sequel I was so desperate to see. Thank you. Though, forgive me, as I prefer to only play completed games, so I will be reading this when it is done.

Good luck, this has made my day, the first game genuinely pulled me in and had me loyaly invested for more <3

Daaaamn, oof. Wanna say what kind, or is that a bit much?

Oh, shiiiiiiit, gotcha. Thanks for educating me, lolol, have a nice day, imma return to procrastinating XD