I have come to add more to this guide. Of course, more spoilers, especially for those who have difficulty making it past the "???" species boss.

Before that, though, let's touch upon the third boss once more.

I have beaten it on multiple occasions already, however, the difficulty of the boss is so ridiculous, to the point where the tactic used by yours truly to beat that monster of a boss is essentially an exploit.

What you must always keep in mind for the third boss is to never take it head-on. Even if you kill it, if it manages to spawn a minion, they can and will stunlock you, as the minions are programmed to simply ram into you eternally while attacking. The minions are very good at pushing you around for something their size.

The tactic I use is essentially a pseudo-out of bounds exploit. Pseudo, as it doesn't really go out of bounds, but it allows one to be outside the boss' "enclosed area". By making use of the fact that the boss spawns only after the player siphonophore moves to a certain distance and triggers the boss spawn, one can navigate to an area outside the boss itself, since the boss' structure takes time to form when it spawns. Here's how to do it:

1. Make sure your siphonophore is armed enough to deal with the boss quickly, which also helps to deal with any minions that remain after the boss' death. I personally use the "Wall of Death" configuration, but as long as you have a siphonophore design that works for you, it'll do.

2. Swim to the extreme left/right side of the arena, then swim upwards. Make sure your siphonophore is in a position where the boss' zooids won't spawn on top of you.

4. Celebrate victory, and prep for whatever's ahead.

/!\ Warning: Spoilers for those who've yet to beat the third boss ahead! /!\

And now, for the true final boss of this build of the game.

Codename: The Crown of Thorns 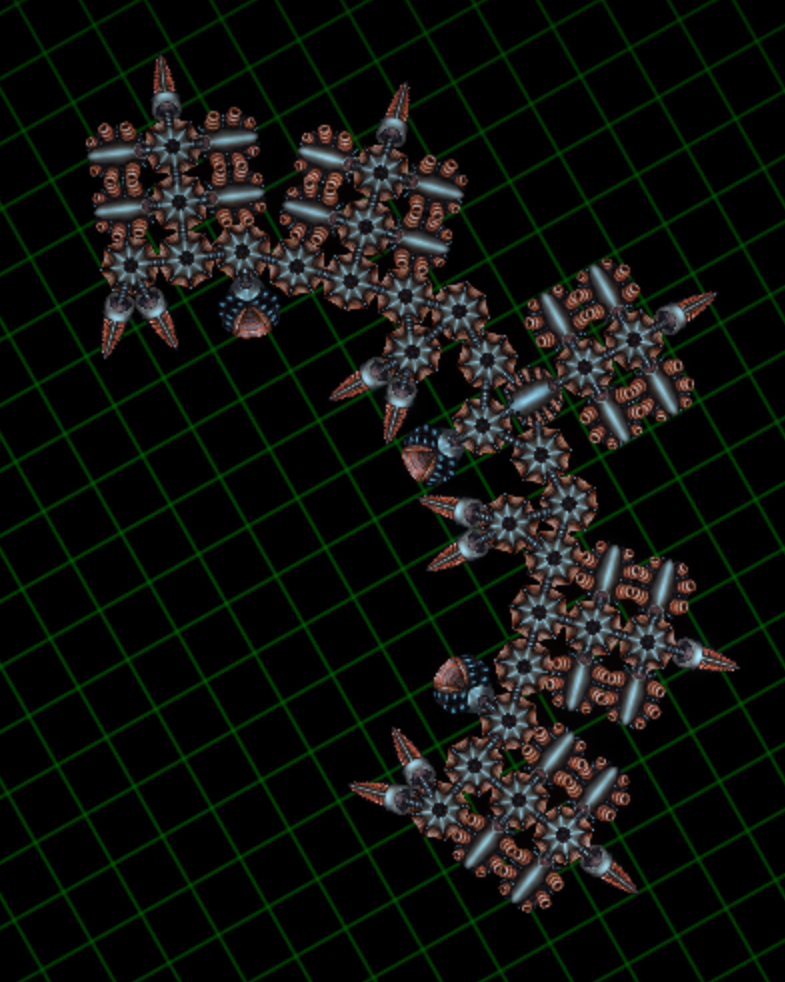 Seen here is an approximate recreation of the boss done by yours truly, approximate, due to the impossible placement of some of the movement zooids on the actual thing (they face diagonally, despite there being two cardinally-placed zooids in the way, which would prevent diagonal placement).

What makes this particular boss dangerous is the arena that it is fought in. Every single wall of the arena is made up of stationary balls of spikes, essentially being the first boss' arena on steroids.  It does not help that the Advena species' Spike zooid is able to instakill zooids given enough force, and the boss' few-but-still-present poison-spewing eater zooids only serve to make the spikesmhave an easier time chewing up your siphonphore.

There are 2 ways to beat this boss.

1. The direct way: A risky-sounding tactic that works most of the time.

Make your siphonophore small and maneuverable, and dart around the boss until you end up on one of its rear "pylons", then eat away. Just beware of the single spikes; a small siphonophore can easily get its core instakilled, even by a lone spike.

2. The cheesy way: A tactic that always works, which makes use of the boss' AI, as well as some creativity.

You must at least have one eater zooid that produces poison (i.e. Advena or Buginis eater zooids). The boss will always try to get at you near the entrance of the arena, sometimes turning to use the spikes on its "pylons" to reach you. Whenever it does the turn, simply move forward slightly from within the safe player spawn area, spray poison, then retreat. Over time, the boss will die. There are multiple ways to make this easier, however. For one, pairing the Saenus  Beeforus' Eater Zooid (the one that can push) with either Advena or Buginis eater zooid will extend your range if you know how to use them together, allowing you to essentially camp from within the safe zone. Furthermore, the boss' AI actively tries to dodge poison mines, which means that creating a mass of poison mines and advancing forward will lead to the boss' AI seizing up, leaving it terribly vulnerable.

Once defeated, you will gain access to the area where all my gigantic creations are birthed: Free Roam mode.