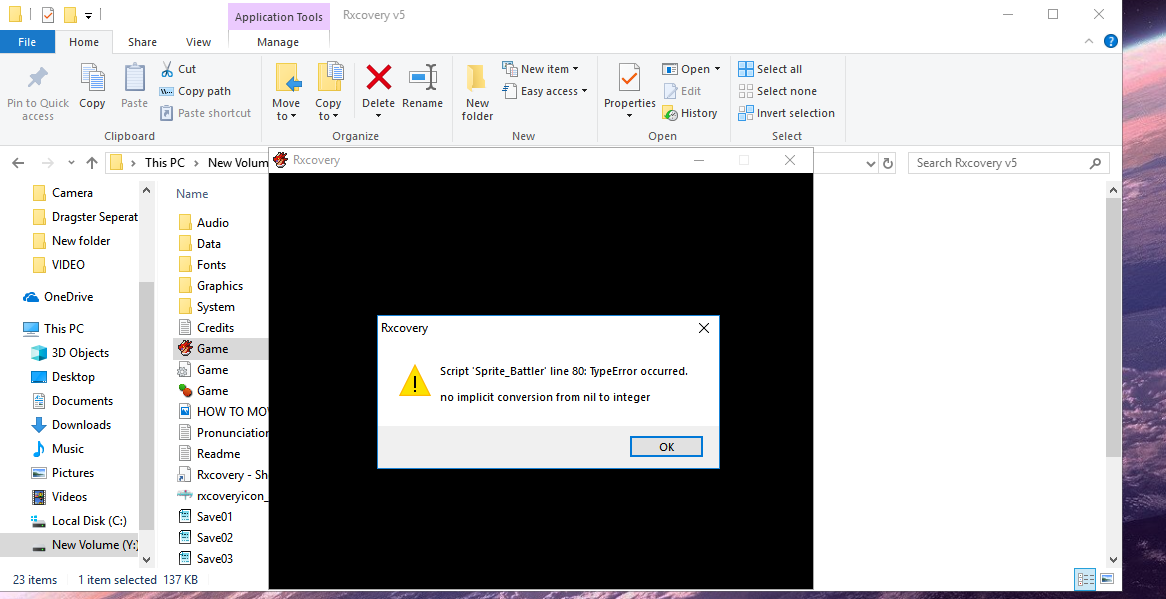 I get to what I believe is the final boss in the long hall (without spoiling this for anyone). I talk to the NPC several times and get "..." about four or five times, and then the full dialog triggers and then the battle begins - but before the battle initiates I'm hit with a black screen and an error window that reads:

I got this point this morning with v4.2 and then saw that version 5 was released and was excited assuming this may fix the bug. However, the game still crashes.


Otherwise, I really enjoyed this game.

Oh no!  That's bad!!  I played the final boss battle twice today and never encountered this!  I have no idea what could have happened, I'm looking into it now

Who is in your party when this happens?  Does it happen with other battles, or just this one?

I just uploaded v5.1, so give this one a try.  I moved some things around.  I can't make the bug happen for me for some reason, so you'll have to be my canary.

Hmm, is the file still named v5? If so, I've downloaded it and switched it out and moved my saves over.  Still no good. Is it possibly just the save file? Or perhaps because I have an empty party slot? Will try and move the party around and see how it goes.

Okay, so I think it may have to something to do with not starting the battle with a total of four party members. I added Suki and its fine now. Thank you for trying to figure it out, you the real mvp. NOW FOR THIS FIGHT!!!

I'm glad you found a workaround!!  Yeah, it seems to have something to do with who's in your party, but if you downloaded "Rxcovery v5.1.zip," that bug shouldn't be happening no matter how few people are in your party.  I'll continue trying to figure this out.  Thanks so much for being patient!