Hi! I played a demo of “The Rose of Segunda” and wanted to leave some feedback as a thank you and also in case it might be useful :D. First of all I really enjoyed the demo! I had fun reading it.

I think for now two things that I liked the most were the choices (as they were plenty) and the main character. I really like that we can adjust her personality, it is something I am always looking forward to in visual novels. I only played it once though so couldn’t test all the possibilities, but she appeared very intriguing with a strong personality :). I got attached to her rather quickly, an MC I could spend many hours with for sure. Choices also seemed all reasonable and will be really cool to explore. I only didn’t this time cause the demo kept giving error messages every time I attempted to save, which is understandable and not a big deal, it is a beta after all.

I liked the writing too, especially witty remarks from MC. I am unsure if it’s also due to it being a demo, but in some places the pacing seemed just a tiny bit too fast. Like in the scene closer to the beginning, when MC and her brother had to stay in a town for a night, it felt like a perfect set up for an event, but not much happened there and they left it fairly quickly. I like fast paced stories and think it is always good when there are no unnecessary details, but it felt kinda lacking in such places, where it could build some depth.

I also think the sprites look very pretty, all the characters are very visually pleasing *_*. Based on the appearance and story behind I liked Frederique, Leopold and Charlotte the most (also very happy she is dateable too, cause she is just adorable)!

And I am very very curious about the secret romance rout now, I would think I figured the romance options out, but this secret one just keeps me wondering haha. If I may ask, is the secret rout present on the first image with all the sprites, or is he yet to appear later :>? Truthfully I think I just hope to confirm my suspicion :D.

All said I am very much looking forward to the game release! *O*

Hello, monsteroverdose,  and thank you for the feedback - I really appreciate you taking the time to let me know what you think.

First off, the saving error you mentioned doesn't sound good at all. Do you have a screenshot of it, please?

I'll investigate and get it fixed as soon as I can. I wonder if anyone else is experiencing it.

I'm glad you like the writing and the way you can influence the MC's personality, and, of course, the sprite art.

As for the pacing, I will look into what you mentioned - perhaps a scene can be added at the inn make the beginning more evenly paced - and I will keep an eye on it going forward.

And lastly, you have seen all the sprites that are in the game in the demo so... that probably answers your question about the secret romance. ^_^

It's pretty well hidden in the game (for, I think, understandable reasons), but it is there for anyone who wants to find it.

Thanks for playing, and I hope you'll have fun with the full game once it is released.

I am very happy if it was a little bit helpful! And sure thing (hope it's the right way to post images here), this is how it looks when I press Esc to summon the menu: 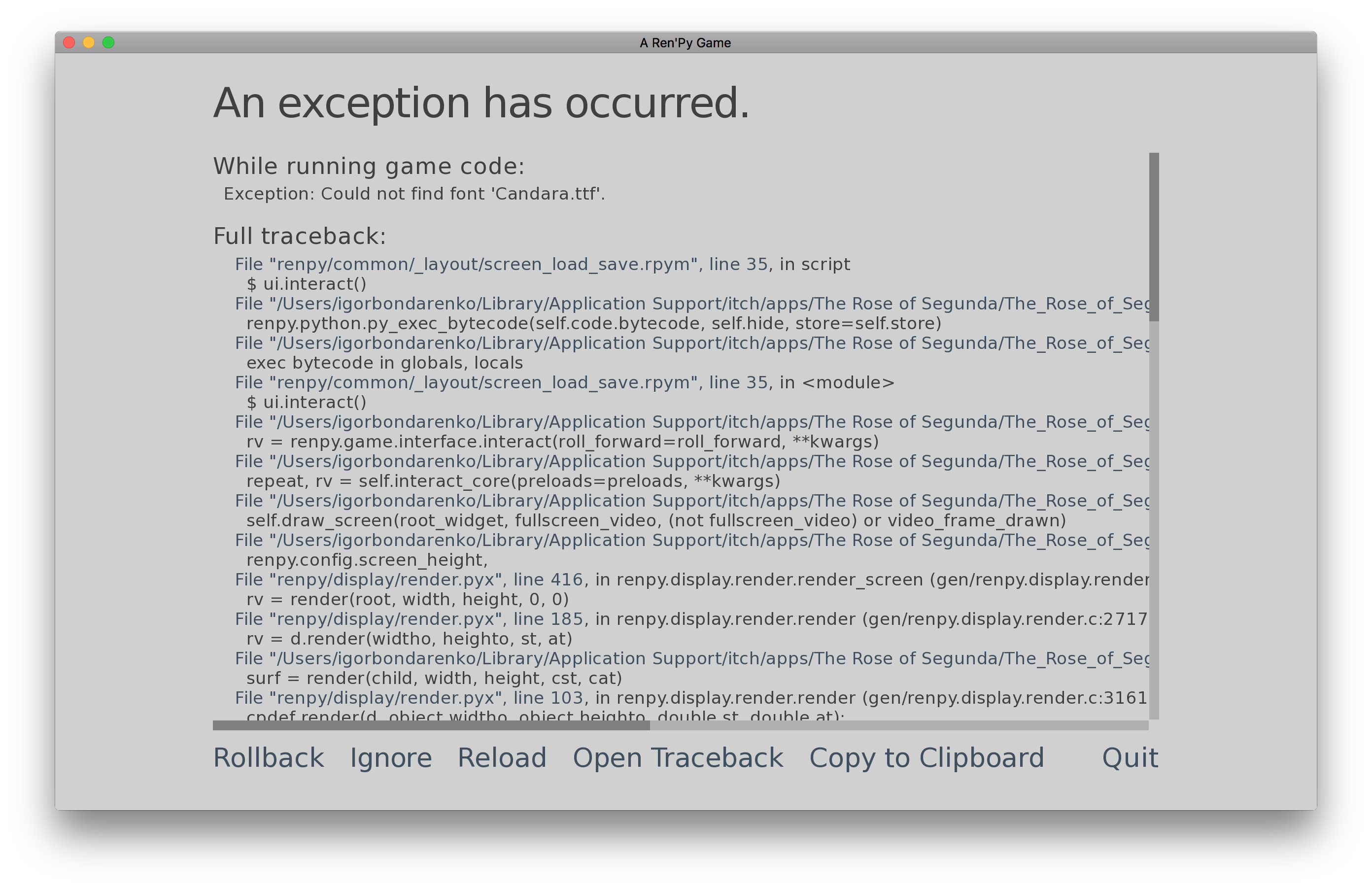 This is an error when I use save button on screen: 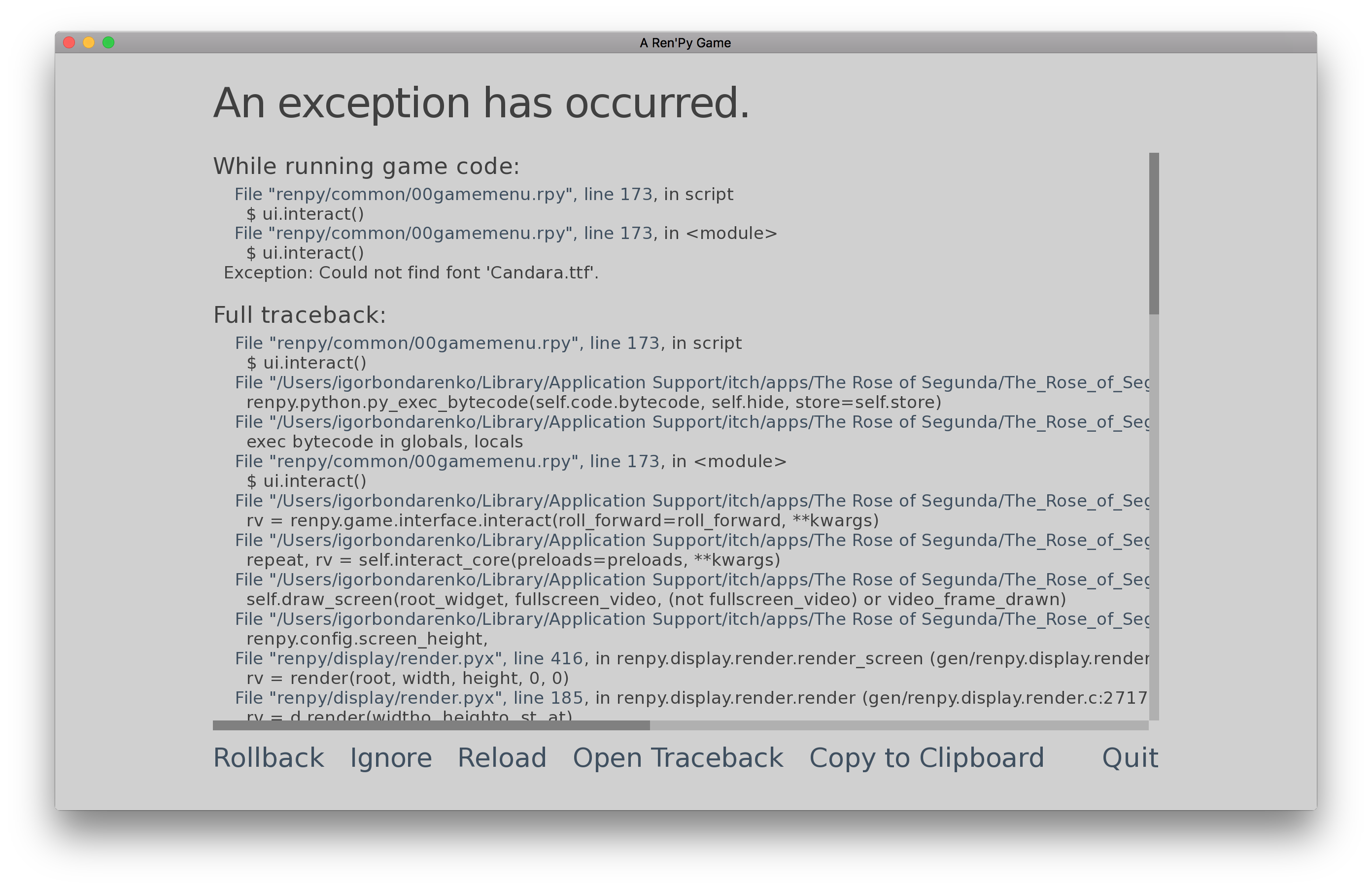 I didn’t realise that it actually gives different errors. Just in case, I use Mac and usually load games from the itch.io app, tell me if you need more detailed specs or smth. I can also try it on Windows to see if it will still occur.

And yay, thank you so much for answering my question. Kukukuku I had a feeling he must be that pretty and cute for reason, glad I got it right! :D

Aha! I think I see the problem. Thanks for posting those screenshots. I'll adjust the demo files within the next 24 and re-upload. ^_^

**EDIT**  Okay, I think the new demo I've uploaded should work if you would like to give it a try. Please let me know if you encounter any more problems.

Wow thank you so much for fixing it! It works great now and I can mess around with the options some more! :DD