My, you are a master at sequence breaking). Personally, i had no problem with these guys - as soon as I aproached the right one ran away (might be due to me having girl and moonless in party), so i just bumped into the one who was attacking and did the battle. After that, the Knight was standing there in her idle animation and after i asked her about "what god do you believe in", the option to recruit  the party member appeared (i have to note here that i did pray to All-mer, her god of choice, 3 times before that encounter). 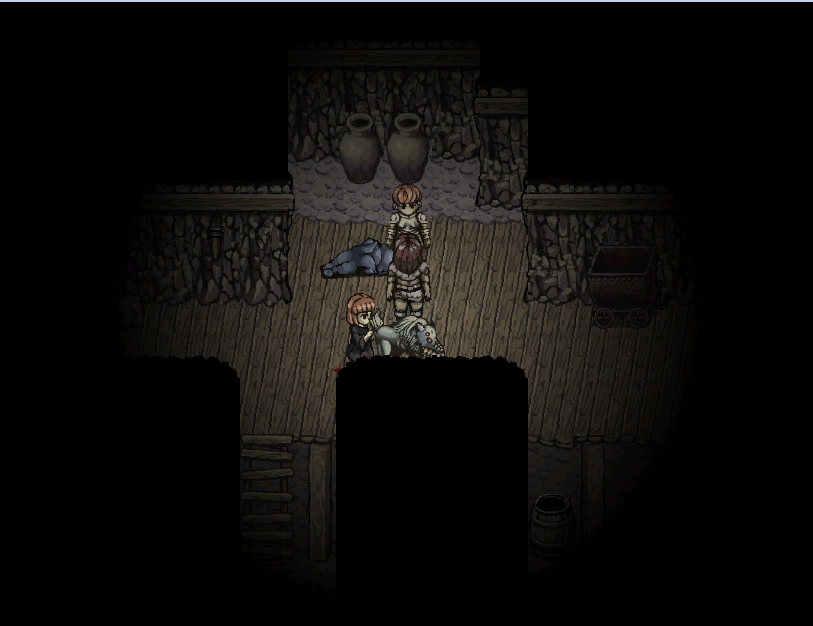 Also, i think you wanted to know where you can get light blue vials. The recipe appeared after i read Alchemilla vol. 2. Although Neco admitted before that vol. 2 is the same as vol.1, i did get 3 recepies other than given by the vol. 1 even though the text was the same. To create one you need 2 blue vials and it heals for 80 hp instead of blue vial's 20. If you haven't encountered the recipe for it in first-floor library, you might wanna check Nosramus - the guy that is protected by spectral knight. He has 2 boookshelves where you can potentially get Alchemilla vol. 2, or even the light blue potion itself on the potion shelf or by checking the pile of bottles near the locked chest. Beware though - the escape chance from spectral knight (both of them) is lower that usual, so kiting him (the one that is lying on the altar) is not reliable. However, the battle becomes pathetically easy if you use an explosive vial.

i found an easier way to get an light blue vial just a few hours ago, [and i beat the game too]. I decided to talk to some of the random mobs around the map, and I learned at least one interesting thing: Instead of fighting Tortur (can't remember name), talk to him first thing in battle and sell out the buckman that's hiding in it's cell, thne you get the key from him and a light blue vial, what a good deal.

Nice job! Too bad i've never had any desire to negotiate with him.

DO you have any idea on how to recruit the dark priest?

Reply
Giwaku to Toso2 years ago

I have a feeling that it has something to do with either cavemother's egg or creating a fetus (logically, i suggest praying to Gro-Goroth too). I'll try to do that a bit later.

do you have a discord? it is becoming very annoying when i have to refresh the page, ik fear& hunger has their own discord