I've been getting some errors. Both devices are Windows 10.

On the computer with a 1.60 GHz processor I'm getting "Fatal error detected. Failed to execute script opencvtuber". It could be because the program is too extensive for the hardware so I tried my other computer.

Upon exiting the program, I get the following error: 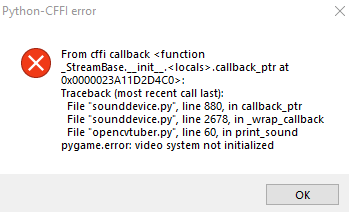 I think the program has potential though. Could there be a way to lock the character portrait in place and only react to sound or voice? I'm thinking of something like Star Fox.

Also is there a way to change the background's color or anything? Is there a menu key I may have missed?

Click on the window and then press 1 to disable rotation (there's currently a bug where the starting angle is 45 degrees) press 3 to disable the other degree of tracking (use 2 and 4 to enable them again) the back ground color is part of the sprites/images you provide to it (located in the main folder) so to change the background color you have to change the background in those images (good news tho if you don't plan on using tracking you only need to replace 3 images. Check the description for some quick instructions on that) and finally that closing bug is known but harmless

The poor tracking is also something in aware of and looking into.