I just finished the Alpha 1.0 version. The level design was pretty solid and so were the enemies, it will certainly get better as things to reward exploration and checkpoints are added (restarting a whole second level or room after falling was a tad frustrating).

There are three (or four) things I would like to point out.

I've got a bug at the very start when I first opened the game were my A and D keys were swapped... It fixed itself after a while and I could not replicate it, sorry I can give more information on that... Also, W and S make the Jackalope animate but do nothing right now.
I've got a bug on my second playthrough, were fighting against the boss, I stayed near the gate and started attacking repeatedly without moving... Just as I was attacking over and over and I got hit, the boss died and this happened, perhaps the dead body pushed me inside. 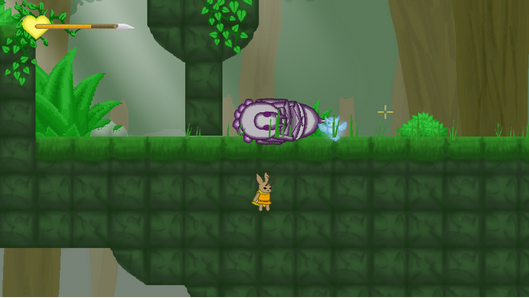 Either way, I enjoyed it, you did a good job and should be proud of what you've accomplished. I've seen how detailed your updates on Twitter are and wish you nothing but the best!

Wow thank your for the super awesome feedback!  I will add this all to my notes and study lists~  I actually coded in a cool-down in the dash, but it doesn't work right haha.  Thanks for the great tips and suggestions, I will continue to improve the game.