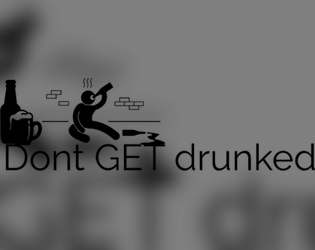 Please list any pre-made art/music/other assets that you used.
all made by me

Anything else you want players to know before they play?
Is one board game based in drinks, not necessary alcool, you can do with rootbeer,juice, you preference

DISCLAIMER: This review is NOT after playing the game because I'm writing this at 2:35 AM and don't want to wake friend up to play this.  This is after reading the game and pondering its design, outcomes, etc. for an extended period of time.  So it's VERY possible I'll miss some things in this comment.  With that said, here we go.

This is an interesting one.  The only board game in this game jam, I believe, and it tries to "gameify" the xkcd comic it's based on.  Unfortunately, it falls flat in quite a few ways.

If you do use alcohol in this game, it WILL get crazy.  The fact that non-alcoholic drinks can be used NEEDS to be in the PDF.  Also, a player can easily exploit the game by drinking slowly from a very large cup and moving a lot of spaces--unless you actually have to roll the dice, THEN drink and move, which the game never says but can be obtusely assumed by the presence of the paper dice (did you make the paper dice too, btw?  Or is it a free source image or something?).  This would make the game go by quite fast.  This is changed in the revised version to having the players move 1 space and then drink--this would make the game crawl by.  Also, it's never said how big your cup should be, or when the dice are even used--especially in the revised version, where players always move 1 space (which REALLY removes any strategic opportunities and competition in the game).  Furthermore, in the revised version and the original, the first player is always the one who drinks.

From here, I will be breaking down every space/rule and discussing how it needs to be explained/expanded after the game jam.  Buckle your seatbelt. :)

--"4. Stop all players and get some drinks" What does this mean?  Does every player take a drink?  Or do they literally get drinks from their kitchen or something, and save them for later in the game?

--"6.1 minute break,go outside and take some air" If this is a game about drinking, this probably should be a recurring space, not a rule, but that's just my opinion here.

--Space 2 (Junk food space): This is really confusing.  Is their literal junk food involved?  Or is this just junk food in the game?  Why would junk food make someone pass out?  Especially if the players use a junk food that doesn't have a strong smell, like chips.

--Space 3: Balance Test: How long does the line have to be?  Also shouldn't it be if they step off of the line they "lose", not if they collapse (I doubt players are super drunk by Space 3, unless their beer cups are enormous).  Also, what do the players lose--that isn't explained!

--Space 4: BarMatrix: "BarMatrix" is pretty funny. X) But now players also need food coloring/colored cups for the game as well?  And why would the player even choose to go back one space if that sets them behind everyone else, AND they have to do the line test again?  Likely every player will choose to move forward one space, which has no disadvantages.

--Space 5: Burping Contest: I like this idea a lot, but players with soda have a clear advantage.  Also, every player is incentivised to vote lower scores for everyone else, and higher scores for themselves.  How is a tie broken?

--Space 6: Staring Contest: I also like this idea.  But what do the players lose?  And if they're all staring at the wall, who judges the contest?

--Space 7: Dance: So is one player dancing to music, or all three?  Since each player moves once space at a time, that's 15 minutes of music dancing in a row because all 3 players will land on that space after one another.  What do they gain/lose in-game for dancing?  Out of game they might pee their pants, but what about in the game?

--Space 8: Don't Blink: Little nitpick, there's no blinking involved at all on this space, since the player's eyes are closed.  And what do they gain/lose for successfully drinking their glass with their eye shut?

--Space 10: Try Your Luck: So now players need to play a whole card game before they can progress in your game?  And since every player will land here one after the other, that's THREE whole card games in a row!  At least it adds some challenge, since the winner moves one space, but it's still too much to ask of the players that they do a whole other game before continuing your game.

--Space 11-12: Another junk food space and burping space.  I already stated my problems with them.

--Space 13: Cutscene.  So the players just read the paper previous to this page?  Why?  What does this do for the game?

This seems like an interesting game.  But it's vaguely explained, is riddled with typos (@Etra_Games said this is to fit with the drunk theme, but I don't know if I see it that way), and is CRAZY imbalanced.  Not only is there barely any in-game strategy, but it requires so many different supplies for the player to have in order to play it, and requires them to take too much time away from the game itself with its various challenges.

There is real potential here, but it is not realized yet.  Perhaps after the jam it can be refined.

Well this is a hard thing to judge. It seems like a fun drinking game but judging on how I never have alcohol I'm not a good person to playtest this, However I do have to say I like how you misspelled everything to fit the theme of being drunk (nice touch) Although I do think you should spell the initial rules correctly for clarification. Anyway one thing I do want to mention is I'm doing a review of design on the games in this jam I can say this won't be in it since I can't really play it but if your interested here's a shameless plug to my channel if you want to be notified of the vid when released: https://www.youtube.com/channel/UC7Vj46GGL9VMUvd4YTMtjXg

I joined this Jam for Fun Etra, the intension of game os onde party game who' anyone can Join, i undetstand you point and remmenber people do Crazy things when become drunked

Well I understand your goal and just to let you know this project make me laugh for a solid 30 seconds! So I think you achieved your goal XD