Submitted by chridd (@chrideedee) — 14 hours, 27 minutes before the deadline
Add to collection 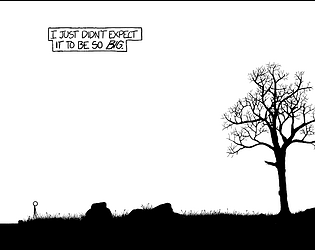 Anything else you want players to know before they play?
The climbing feature is unfinished/not fully debugged and can cause various glitches if you press up or down in certain places.

I hadn't read the xkcd comic before this--that's a great strip to make a game after!  I love the idea of exploring the world of that comic strip in a platformer.

Since pretty much all the content from your game is from the xkcd comic, I won't review that.  I will review the mechanics and how they're implemented, and the design you used in your game.  So here we go! :)

First off, love the fact that you have the xkcd strip itself as an intro.  The fade in speed is perfect.  And you use fade-in for all the dialogue, too, which is great!  Also, love that you included a map (though a player wouldn't know there was one if they never pause) and that you can continue your game where you left off.

But the main element of the game, the exploration, feels off.  The run speed is way too fast and the animation that goes with it is rather jilted.  And because of the fast run speed, the screen can barely scroll to catch up as I explore.  Also the jump is quite high.

I do understand that you might've wanted to make the run speed fast so a player could explore the huge area in a reasonable amount of time.  But personally I think the run is way to fast and almost forces a player to take in the area too quickly, or else explore it in quick little bursts; to me, I read the xkcd comic this was based on as an opportunity to slow down and explore its world, and this game does not capture that essence.  Not helping is the fact that I clipped on platforms and edges a lot; I found myself walking on the air at one point for some reason as well, and when I was at the tree with the tire swing I pressed down and slowly went into the ground.

Overall, I enjoyed my time here.  Would love to see a more polished version after the jam is over.  Great job on this. :)

> The run speed is way too fast and the animation that goes with it is rather jilted.

By the way, I forgot to mention this anywhere, but you can move slower by holding Shift.  I guess perhaps switching that around and making walking the default might fit the tone better in this case?  (Or are you referring to the weird glitch that causes you to move fast (among other things) if you press up or down in certain places?  That's related to the glitchy unfinished climbing feature where the character will try to "climb" bumpy/hilly surfaces as if they were walls.  That might also be why you walked in air.)

> Also the jump is quite high.

You mean a bit too high or were you expecting a more realistic less-than-your-body-height jump?  If the latter, then it may just be a difference of what we're used to.  (Oddly enough, I just tested the jump height in a few different platform games I had and it was much more consistent relative to character height than I was expecting.)

> when I was at the tree with the tire swing I pressed down and slowly went into the ground.

Known bug, didn't catch it in time to fix it.  (The character doesn't actually move down when that happens, only the graphic does; making the character and graphic positions separate was probably not the best idea I had...)

Neat to see this world actually playable! I do feel like the character should be sped up and able to fly instead of being stuck in pits.  Anyway one thing I do want to mention is I'm doing a review of design on the games in this jam so here's a shameless plug to my channel if you want to be notified of the vid when released: https://www.youtube.com/channel/UC7Vj46GGL9VMUvd4YTMtjXg

The newer version that I'm working on has the ability to climb, so that should (in theory) solve the pit problem.  There's also the cheat code I mentioned in the game description.

looking forward to it

The improved speed and the climb REALLY help this. Other than being kinda buggy it was a great interpretation of the comic!