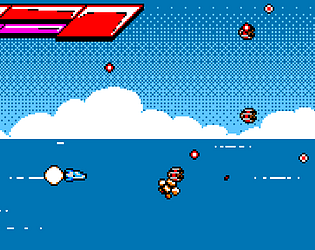 quite fun, though it is confusing why i get small all of the sudden

Thanks for playing!  You can take over enemy ships by hitting them with a Steal Shot.  The drone ships are smaller and you most likely took over one of their ships.  The current version is the game jam version of the game and in the future the post game jam version will make it more clear when you take over an enemy's ship.