Resolution on Nanotechnology, the Rights of Machines, and Life I guessView game page

supervillainy
Submitted by miserytourism (@miserytourism) — 48 days, 6 hours before the deadline
Add to collection 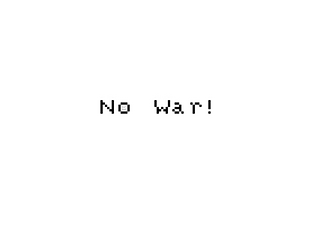 Resolution on Nanotechnology, the Rights of Machines, and Life I guess's itch.io page

Name you'd like to be published under, if accepted
lynchpoet

Short bio, written in the third person
lynchpoet/rudy is a hick from Malone NY who designs games, writes poetry and gets destroyed by 14-year-olds on League of Legends. when not doing any of those things, lynchpoet collects a disability check and works with friend, William, running Misery Tourism, a site that publishes outsider art.

Artist Statement, about your piece
Creation of poetry is a compulsion for me, and it sometimes (daily) overlaps with my other compulsion of generating supervillain concepts. I'd like to think my process is a good one: I come up with the name first, then extrapolate powers, identity, ideology, etc from that. It's simple: we name the Batman.

This poem about "General Assembly"—a dictator whose scheme is replacing Sub-Saharan Africa's people, cultures, and wildlife with replica nanomachines (then, uhh, profit?)—mostly deals with detached observation. The player has no active role except scrolling, which I think mimics the Zero's Journey a lot of us in the West take whenever we read through international headlines. There are, arguably, some consequences to the passive consumption of world tears (the microorganisms and nanomachines that follow your mouse only to be eaten by the General's arbitrary ethical calculus are a representation of all the adclicks, one-tweet political awakenings, and watercooler asides), but the process for many of us is: scroll scroll scroll, briefly stare at some horrific shit, make sense of it (or, more often, don't). Visually, this piece is a mindcastle for a lunatic where, as the physical space represented gets smaller, the concepts get more grandiose. All the while the reader gets... older [sleepier, hungrier, have-to-piss-er]? The fact that the text can be scrolled through endlessly with largely similar results, well, you know.

What do you need from us, when giving feedback on your piece?
I'm wondering if the scrolling pacing is right. There are parts where wide open spaces are meant to taunt the reader (specifically the "technology zooms ahead" section), but I don't know if these are too prominent or distracting.

Questions, Comments, Concerns?
This is awesome. Please do more than one of these.

This is an absolutely amazing piece of art.  I love the super villain and the scroll mechanic, though sometimes the "jump" to the next poem would be a bit jarring. So far as the scrolling pace in the "Technology Zooms Ahead" section, I like the taunt that is being made (the reader/player must work "harder" by scrolling more, though at some point I began to wonder if it was just my laptop not being able to handle it.

I really love how you play with proximity, dimensionality, and spatiality in this piece, and think some sonic texture (voices getting nearer or farer (louder or softer) based on scroll, echoes, etc) would be a lovely addition. That said, this piece is strong in and of itself! The form feels very intentional and appropriate for the content (detached observation), and the scrutiny of truly horrific acts through a glass screen.

I've attached a playthrough I made so you could get some live feedback :) Please let me know if we can help in any other way!

I love this creativity!

... Okay, but I love and slightly relate to your compulsion to create supervillains...

If you'll pardon my language, holy fuck, this is cool. I'm not sure that I'd describe what the reader's doing as "scrolling" so much as increasing and decreasing the magnification of what they're seeing (a verb I enjoy if only because it gives the lie to how little being "more precise" really gets us when it comes to some persons' disregard for others' lives; I think it also works well with one of the themes you mention in your artist statement -- all this research we do from the outside looking in really doesn't get us anywhere that helps people, half the time). Selfishly, I kind of want to see a longer piece in this vein with even greater sprawl.

Experimentation - 5, because this is truly a form of reading that you can't get in any other medium.

Interactivity - As you say, the reader's not doing much more than zooming in and out here, but I don't really mind it -- it feels genuinely exploratory, and I like how the mechanic permits you to control the pace of the piece. It kind of feels like time travel.

Polish - My poor computer had some trouble running this. It wasn't always easy for me to scroll smoothly between different "sections" of the piece, and it would jolt quite a bit between (what my computer at least perceived to be) distinct "sections." I'm not sure if this is just a problem with my hardware, though.

Poetry - Definitely a poem (5), but I felt like it had some pretty gamified aesthetics, which brings it a little closer (4) to the "game" (1) side for me.

This is so good! Great work!