Tunnel to the center of the earth while avoiding obstacles!
Submitted by Adam Baker (@Cwazywierdo) — 35 minutes, 28 seconds before the deadline
Add to collection 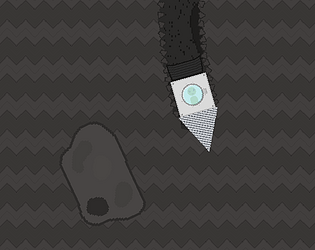 I liked :
- Classic controls, yet still a little curve to get used to them
- Coherent graphisms, give a nice athmosphere
- Nice feeling watching this drill dive beneath the surface at the start, it feels powerful

What could be better :
- Having to die twice on paths (ie: at -80) where the straight path is a trap (though I wasn't fooled the second time ^^)
- Preset progression and finish-ability is not the best if streamers play your game afterward, you won't be able to distinguish between them (apart from a few milliseconds of difference?). Consider procedural generation? =D
- Maybe make the hitbox a bit smaller ? I had the feeling they were a bit hard on me sometime.

I'm discovering that I'm forced to rate the sounds... I hope it wont affect some kind of average note.

Cute graphics ! Easy to understand controls, it's cool ! It's missing some sounds, but anyway, it's made under 72h, so it's okay !